The Inkjet Print as Objet D’Art

In an essay byJohn Szarkowski, the previous curator of photography at New York’sMuseum of Modern Art, he comments that during the first century of photography’s existence (possibly ’till the mid 1950s) it was understood primarily through original photographic prints. Only since the second half of the 20th century have professional photographers come to assume that they would make their livings by people seeing their work in reproduction rather than through original prints.

As Szarkowski points out, this is a much easier and more profitable system. Make one print, deliver it to the photoengraver, and pretty soon millions of copies were in people’s hands through magazines, newspapers and books. In fact, hasn’t it been every photographer’s dream to shoot forNational Geographic? No original prints here, just 6 million reproductions inside a yellow bordered cover.

But with this approach the photographer is no longer a sole practitioner. Like a movie director, and unlike a painter, he inherently is no longer solely responsible for the creation of a work of art; he is part of a team. There are art directors, photo engravers, technicians and printers along the way, each one of whom adds their technical input and esthetic value judgments to the final image seen by the public. 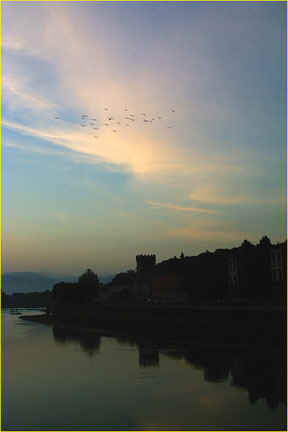 Around this same time (the mid-20th century) the market for fine-art photography began to appear. Collectors and galleries began to acquire photographs as original art works in their own right. This lead to the creation of a generation of photographers for whom the individual print because an end in itself. It wasn’t just the image on the paper that was the work of art, the paper and chemicals themselves were an intrinsic part of the "Objet D’art".

This lead to the concept of the "hand made" photographic print asObjet. Whether B&W or colour, the fact that the photographer himself (or at least a master printer under his direction) made the print is what differentiated it from the same image produced in a book or magazine, no matter how good the reproduction. It was considered a work of art, and rightly so.

The venerable Ansel Adams, one of the most prolific photographic printers, produced some 13,000 prints between 1948 and 1976. Another great 20th century printmaker, Picasso, is said to have made close to 200,000 prints of various types during his lifetime.

This leads us to the topic of inkjet prints as art object. There are some in the fine-art photographic community (and the number is not small) who consider an inkjet print to be a lesser object than a wet-process photographic print. It’s never been clear to me (and believe me, I’ve asked), why this is so. Both are produced using mechanical means. The wet practitioner exposes the image from a piece of original camera film onto a piece of paper using an enlarger. The digital worker exposes the same original camera film into a scanner which places the image on-screen on a computer and then onto paper via a printer.

The wet process worker uses various tools to alter the image being projected onto paper so as to control brightness, contrast and colour. These tools include the choice of paper and chemicals to be used, dodging and burning tools and filters.

The digital worker uses similar electronic tools within a program like Photoshop to similarly alter brightness, contrast and colour.

The traditional darkroom worker (or his assistant) then places the exposed paper into a series of chemical baths, either manually or possibly using a processing machine.

The digital worker saves the results of his control manipulations and saves the image along with these adjustments to a computer file. He then chooses which inks and paper to use for a particular image and sends it to an inkjet printer.

Both workers end up some minutes or hours later with a finished print. One has used a certain combination of papers and chemicals to produce a print, the other has used certain papers and dyes or pigments to do similarly. Both printers used a variety of technical equipment to make their prints‚ enlargers, dichroic filter heads, processing baths and machines on the one hand and scanners, a computer and an inkjet printer on the other hand. Both can be said to be "handmade" prints, though neither is in the class of a hand-painted watercolour or oil painting.

In fact, making photographic prints is more akin to traditional fine art printmaking than it is to painting. Once a "plate" has been made in lithography, or a screen in silk screen printing, the rest of the process is somewhat mechanical.It’s in the initial steps where the art resides.

Are such object any less valid as art? Is an original, signed Picasso lithograph no less a work of art than one of his oils? Priced differently, to be sure, but still a work from the eye, heart and hand of the artist.

The wordgiclÃƒË†e(pronounced zeeklae) came into vogue in the mid-90’s. It referred to inkjet prints made onIrisprinters. (GiclÃƒË†e is the French word for "to squirt"). At the time Iris printers were the best printers available for making large-format photographic inkjet prints on fine art papers.

A number of photographic artists were able to make some headway with these in the exhibition community, and giclÃƒË†e prints began to be accepted by galleries and museums. Then, along cameEpsonas well as other brands of inkjet printers. All of a sudden inkjet prints could be made by anyone, not just a lab with $100,000 to invest in anIrisprinter. EventuallyEpson,and other manufacturers likeRoland,started to produce large format inkjet printers that actually surpassedIrisprinters in photographic image quality. Today, Epson’s range of high-end inkjet printers from the2000Pat under $1000 to the5500, and large format7500,9500and10000models, all of which produce archival prints with image quality suitable for gallery and museum exhibition.

Unless a viewer has seen a well made giclÃƒË†e print (inkjet if you prefer), their automatic response is that it can’t be as good as a chemical print. Sorry folks, you’re wrong.

In 1999 I started to make my first of many tests, which I have repeated on several occasions. I took the identical digital file, made prints on inkjet printers and also onLightJetprinters via  local pro labs, and as well made Cibachromes myself from the original transparencies. (I’ve been a Cibachrome printer and teacher for more than 20 years).

The Inkjets and the LightJets were preferable in almost every respect. The Cibachromes were simply not in the same league, because without digital image processing brought to bear, colour balance, contrast and other finely tunable parameters simply lacked the subtlety that the other two print formats were capable of. The question of time and effort involved in making Cibachromes is, of course, another issue.

The LightJet and Inkjet prints were quite similar. Most labs can do a good job of balancing to the imbedded profile. At the time of these tests, in terms if resolution and detail, neither I nor several knowledgeable viewers could see any appreciable difference in 20X24" prints, even with our noses close to the paper.

The real difference was that the LightJet prints (and this applies toDurst Lamdaprints as well, which I’ve also tested) were available from the lab in only one or two paper surfaces, while with inkjet printers the choice of available papers is quite large, including matt finish papers which I’ve become quite partial to.

Where we Stand Today

Photography is at a crossroad as the 21st century begins. The technology for how we print our images is changing at a ferocious pace. In 1995 an inkjet print was largely an object of derision, suitable for amateurs and hobbyists, especially if they didn’t care (or know) that the print would likely discolour and fade in months.

Today an inkjet print from one of Epson’s pigment-based printers has an expected life span of between 100 and 200 years, longer thananypreviously available colour print media, including Cibachrome and Dye Transfer.

Because of the remarkable image processing tools available though digital techniques, master printers can exert far greater and more subtle control over the final image than was ever previously possible. The wide choice of papers available for inkjet printing also far exceeds the limited selections available to chemical darkroom workers.

Of course, in the end‚ and no matter what evidence is brought to bare, or what arguments are made, the hard-core aficionado of the traditional photographic print will claim that an inkjet print just isn’t a "photograph". Well, all I can can is, "Get over it".

Is it Art Yet?