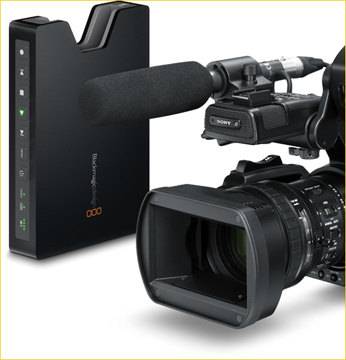 Quite a number of video DSLRs as well as mid-to-high-end camcorders output a clean HDMI signal. If one can record this then one is capturing the signal from the camera before it has gone through the inevitable compression that must be applied to a video signal so that it can be recorded to a memory card. There is an alphabet soup of capture formats (CODECs) used by different manufacturers, each with different compression methodologies. AVCHD is one such; a standard co-developed by Panasonic and Sony, and one which is used in quite a few cameras as well as in the ubiquitous Blu-Ray disc format.

Since video compression invariably leads to compromises in image quality, or so the common wisdom goes, wouldn’t it be great if we could record from our cameras in either a very lightly compressed or even a totally uncompressed format? The latter is what theBlackmagic Hyperdeck Shuttledoes.

This report is on the initial Hyperdeck, which in January, 2012 was supplanted by the Hyperdeck 2. The major difference between the two is that the Hyperdeck 2 records not only completely uncompressed but also in the lightly compressed DnXHD format. Some users will find that the greater recording time permitted with a compressed format has its advantages. It seems to me though that this then turns the Hyperdeck into a device not much different than its competitors, some of which appear to offer more bang for the buck.

The Hyperdeck Shuttle features two SDI and dual HDMI input and output ports. It also has a USB port for firmware updates. There is a built-in rechargable battery which can run the unit for about an hour. A charger / power supply is included, and external 12V batteries can also be used to power it.

The Hyperdeck is priced at $350, but sells many places for as low as $250. This is remarkably inexpensive for an external video recorder, with the main reason being that it does not include a drive. Because of the high data rates required for uncompressed recording ( 10 Gigabytes per minute ) it will only work with SSD drives, and even then only the fastest ones. AnOCZ 240 GBdrive, for example, costs about $350 and will provide just 24 minutes of recording. You’ll also likely want aVoyager Q Quad Interfacedrive reader for transfers ($75), and a mounting plate from Blackmagic, another $100. This brings the total to about $800 for a basic usable system. TheB&H product pageshows the unit and all needed accessories.

This is a 10 bit 4:2:2 recorder – if your camera can output it. Otherwise it will accept any lower data rate or colour encoding sent to it.

The Hyperdeck is heavy. Add the required mounting plate and it becomesreallyheavy. Construction is first rate though. The unit is made from a block of aluminum, control buttons are clearly labeled, and it feels robust. Did a mention that it’s heavy?

One complaint that is commonly heard as well is that the Hyperdeck Shuttle does not detect time code to trigger recording. This means that you have to manually start and stop the recorder via the control buttons rather than being able to have it activated when you start and stop the camera. If you are using the recorder simply as a simultanious backup that won’t work. If you are comfortable using the Hyoerdeck as your primary recorder than you can ignore the camera’s Record button. (This assumes that your camera outputs a continious clean HDMI signal. Check if this is the case. Some cameras put out signals with information overlays).

Be aware that depending on which camera you use, certain types of recodings are not transmitted over HDMI or SDI. For example, on my Sony FS100 variable speed recordings of all types can not be recorded. For the type of work that I do this limitation is a concern.

If you are shooting in 24P, there’s a gottcha. Below is the problem, as quoted froman article on the AbleCine web site.

“Some cameras, such as Sony’s FS100, will record in 1080 24p, but output only 1080 60i over HDMI. The FS100 does this to make its output compatible with monitors and other devices. The internal video recording is true 24p, but the output has gone through a 2:3 pull down process, whereby the 24p is converted into 60i. Because 24 frames do not evenly split into 60 interlaced fields, this process stretches 24p into 60i which does result in some obvious interlacing artifacts. Here is a quick illustration showing how four frames (from 24p) split into interlaced fields.

For anyone wishing to record the HDMI signal coming out of the FS100, this can be a major headache. Recorders such as the Ki Pro Minior the HyperDeck Shuttlecan easily record the video coming out, but unfortunately they cannot remove the 2:3 pull down to convert the video back into 24p. Here are a couple quick examples of how to remove the pull down and get good results.”

Text and image above quoted from Abel Cine

The quoted article offers a solution, both for Final Cut 7 & X users as well as others. It does involve an extra time (and hard drive) consuming step, and in the end, instead of having a true uncompressed file to work with you end up with a ProRes or other compressed file, though ProRes HQ is about as lossless as it gets.This really calls into question the whole worthyness of the entire exercise. A device like the Atomos Ninja which can remove 3:2 pulldown and which records directly to ProRes would seem a better choice.

Obviously, the first thing I did after setting up the Hyperdeck Shuttle with my Sony FS100 was to record a number of different scenes both to the camera’s card and also in uncompressed form to the Hyperdeck. Files were loaded into Final Cut X with the AVCHD transcoded into ProRes HQ. A variety of images were compared, low ISO (gain), high ISO, rapid motion, high contrast, low contrast and so on and so forth. Everything we could think of.

Before I tell what our findings were I should mention that I have done a great deal of reading of forum postings and reviews online. Not just of the Hyperdeck, but also most the other affordable external disk recorders. What seem to be most user’s opinions, (and this is expecially true of the Hyperdeck with the FS100’s AVCHD) is that these recorders simply don’t offer a huge (or in many cases even noticeable) image quality advantage. Certainly not sufficient to justify the cost and the hassle.

My own findings? The same. No matter what the IQ challenge that I threw at the files, putting them up on the same timeline and doing a careful comparison showed slight differences at best. Would results with a different model camera show the Hyperdeck Shuttle to be worthwhile? Quite possibly, but since I don’t have an unlimited selection of cameras, or the time to test them, I’ll leave this as an excercise for others.

I was curious though to see how a green screen test would turn out. I typically don’t do much chromakey work but it was easy enough to set up. Final Cut X makes doing keying a breeze, even with a key background that isn’t that evenly lit.

The brief sample below shows that in this test at least (a more rigerous test might prove otherwise) it still isn’t possible to see much an appreciable difference between the AVCHD footage from the FS100’s SD card and the footage from the Hyperdeck.

The above clip has not been adjusted or graded in any way other than to create a chromakey in Final Cut X.
The split screen shows the Hyperdeck image on the left and AVCHD transcoded to Prores on the right.
The REC 709 camera profile was used.

It seems quite amazing that a 24 Megabit / second compressed recording can equal a 1024 Megabit / second uncompressed recording, but that’s what I and several knowledgable film makers see from these tests. This, coupled with just about every other report that I’ve read echoing similar findings can only lead me to conclude that with this camera at least, there isn’t much of anything to be gained by using a Hyperdeck Shuttle external recorder – at least if improved image quality is the goal. And with a recording rate of 10 Gigabytes per minute (yes, that’s Bytes not Bits) you’re looking at a some 600 Gigabytes per hour of recording space. Better stock up on more hard drives if you buy one.

If the Hyperdeck Shuttle doesn’t seem to deliver higher image quality than the FS100’s AVCHD, what about one of the other external decks, such as the very popularAtomos Ninja? Ina review by cinematographer Richard Alen Crook, he comes to pretty much the same conclusions that I have. “I really really really REALLY wanted the Ninja, and more importantly the Prores less-uncompressed codec, to hold up better in terms of the criteria I outlined above.  But in every way, the AVCHD held up much better if not the same“.

Would use of either of these devices on a different model camera turn out otherwise? Perhaps. What about other external recorders? Again perhaps. But, based on my experience I would suggest that before investing in any of these devices with the sole purpose of improving IQ, you run your own tests with the specific unit and camera that you will be using and for the specific results that you require.

Norman Koren - Imatest Luminous Landscape Video Journal 19contains an interview with scientist Norman Koren - the founder of Imatest. Here are some weblinks that