I first visited Icelandin the summer of 2002, and it was love at first exposure. I’ve done landscape photography all over the world, but Iceland captured my heart and my imagination like no other place. Exactly 12 months later, in late June, 2003, I returned for another week of photography. This time it was with a small invitational workshop group, and with a secondary purpose of scouting locations and figuring logistics for a series of workshops that I plan to hold there in the summer of 2004. (More on this at the end of the article).

The members of this small workshop wereThomas Knoll, the original author ofPhotoshop, andBill Caulfeild-Browne, a board member of theNature Conservancy of Canada— both very fine photographers. Thomas and Bill had each attended two previous workshops of mine, and I know that Iceland was high on their must-see list. The fourth member of our party wasChris Sanderson, the director of theVideo Journal.

The two best photographs from this shoot can be found separately inthis article. 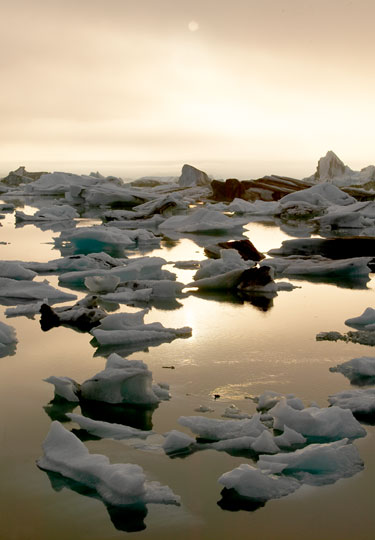 No trip to Iceland would be complete for a photographer without a visit toJokulsarlon. This is a small lake at the foot of the vastVatnajokullglacier into which icebergs calve and then flow out to sea. It is located right on Highway One on the southern coast. The only impediment to photography is the weather. The proximity of the glacier to the ocean creates constant rain, mist and fog, and to find oneself there at any time other than under poor conditions is a treat.

As we arrived I was very excited by how clear the sky was. There was some local mist but the sun was shining intermittently. The frame above is one of the first taken, but within minutes a huge fog bank rolled in and we spent the next 24 hours on the southwest coast in heavy fog. Such is the nature of landscape photography. 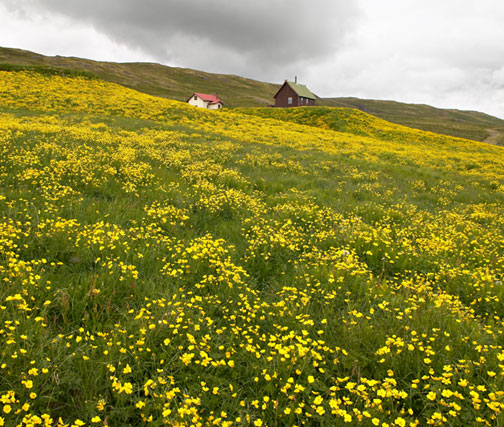 Iceland isn’t all dark lava fields and shining glaciers. It is also pastoral fields of wildflowers. There’s little to say about this simple image other than that it was possible to have depth of field from inches to infinity through the use of a tilt / shift lens, one of the most useful lenses to own if you don’t use a large format camera with movements. 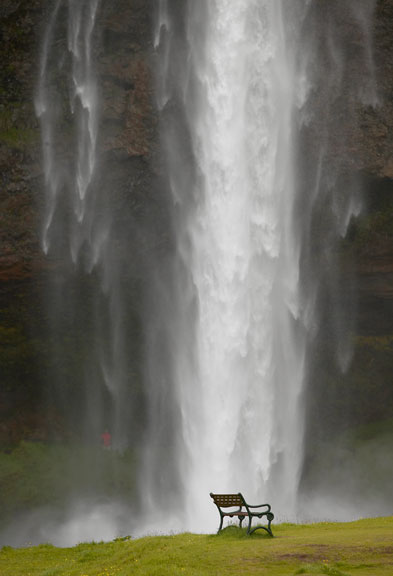 Iceland is a country with countless waterfalls. Photographing them in a fresh way is a challenge, as is giving them a sense of scale. Here, the bench and the faintly seen figure in the red jacket, behind the waterfall, give the needed scale and also lend an air of enchantment.

It’s a cliche, but what a lovely cliche. It was exactly midnight as we drove past a small farm on the Arctic coast of northern Iceland and spotted this pastoral scene. This illustrates the combined joy and pain of shooting in Iceland in mid-summer. There is continuous golden light for about 8 hours of the day, and therefore the choice has to be made between shooting and sleeping. Guess which one wins?! 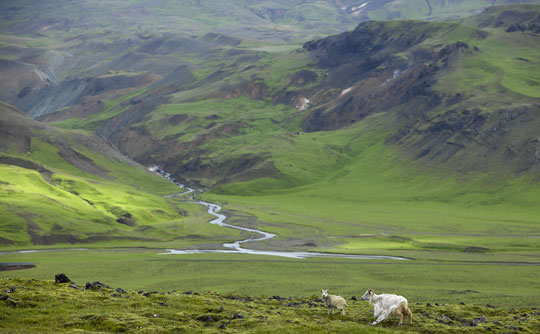 I’m often asked —so what is Iceland really like?This photograph captures something of one aspect of the Icelandic landscape — the ubiquitous sheep and the pastoral hills and rivers. The dappled light of the almost constantly moving clouds become a vital component of many landscape images. 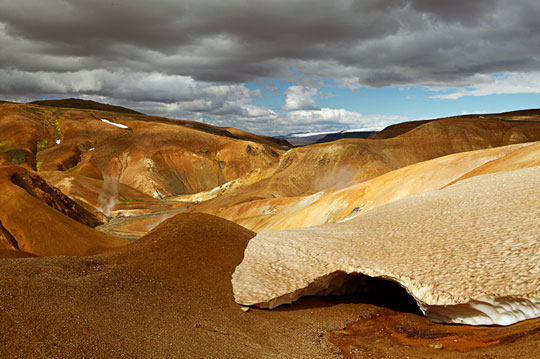 In the interior of the country lies a thermal area calledSnaefellsjokull. It is off the usual tourist track, and requires 4WD vehicles to get there because of the need to ford a couple of streams. But, when the light is right the landscape appears to be from a vision or dream, with multi-hued earth patterns, snow remnants and steaming thermal areas. 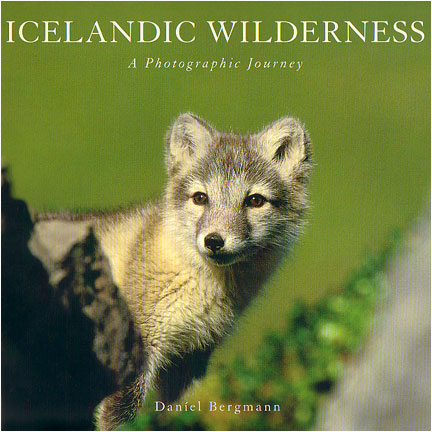 One of the top nature photographers working in Iceland today isDaniel Bergman. I first met Daniel last year and he again joined us for a few days on this year’s trip, taking us to some fascinating out-of-the-way locales. Daniel is an Icelander and knows his country intimately. He is also a naturalist and outdoorsman in addition to being a fine photographer.

His new book,Icelandic Wilderness, has just become available (summer, 2003). It is a unique collection of images of this lovely country and its wildlife. The accompanying text by Daniel also illustrates the heart and soul of a native Icelander with a great love of the natural beauty of his country.

It is published in Iceland byJPV Publishers, and though the web page for the book is not yet in English, the book is in English and can easily be ordered from the publisher directly. The ISBN number is 9979-775-45-9.

Daniel will be one of the co-leaders of my 2004 workshops in Iceland.

This June/July 2003 trip was in large measure an opportunity to map out an itinerary and plan logistics for a larger workshop in Iceland now scheduled for the summer of 2004. Because of the very strong interest in this workshop I am providing below some preliminary information as well as a wait list registration form.No obligation of course.

— The workshop will take place in late June / early July 2004 and will last for 6 days. It will accommodate 12 photographers. If there are a sufficient number of people interested a second workshop will be conducted immediately following, in the early to mid-July time frame. The first workshop will be timed to coincide with a full moon. Otherwise these workshops will have essentially identical itineraries.

— The 12 participating photographers will travel 3 persons to a vehicle in four 4-WD Land Rover type vehicles. The drivers of these, and the primary guides and instructors will be Michael Reichmann, Chris Sanderson, Steve Kossack and Daniel Bergman. Chris is the Director of the Video Journal, Steve is an experienced landscape photographer and teacher who has worked with Michael on many of his workshops, and Daniel is a leading Icelandic photographer, and will act as our location guide. Everyone will have an opportunity to rotate vehicles each day.

— Each vehicle will carry only the four passengers and their camera equipment. All luggage, camping and other gear will be transported in a supply vehicle by two assistants.

— Because of the remote locations that we will be visiting we will be camping on at least 4 of the 6 nights. Tents will be provided and the two assistants will be responsible for setting up the tents and the preparation of meals. At least two nights, one mid-way during the trip and one on the last night will be spent in hotels. This may be the only opportunity that you’ll have for a warm shower.

While we will be eating in restaurants whenever possible (actually snack bar / grills at gas stations — which is where most travelers in Iceland eat), because of the remote locations and weird hours we will be eating simple camp food on many of the days. This trip willnotbe a culinary experience. (People who have attended one of my previous workshops know that I enjoy good food and drink, but for the most part this isn’t possible in Iceland).

— At this time of year there are 20 hours of daylight each day. The best light is between 8pm and 8am, which means that unless it’s raining we’ll be shooting all night and camping during the day. We won’t be getting much sleep. We will also be driving a great deal and by the end of the week you will be sleep deprived, dirty and exhausted. 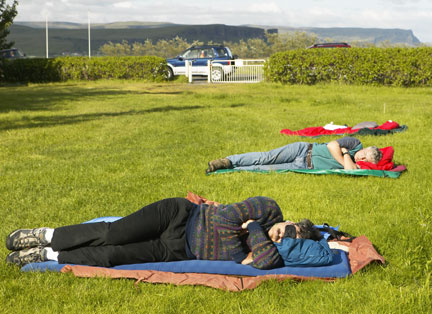 Afternoon Nap on The Road

— The workshop is of course open to both men and women. But women should be aware that because we will be driving and shooting for long periods in very remote areas "nature breaks" may have to be by the side of the road — something that is obviously easier for men than woman. If you don’t mind, we won’t. Also, tents and hotel rooms will be for two persons sharing. If there is an even number of women attending, then there’s no issue with regard to hotel rooms. If there is an odd number than there may have to be a supplemental fee for a single room. Single tents will not be a problem.

— There is no firm price yet for the workshop, but it is likely to be $4,000+. It is this high because everything in Iceland is very expensive. The price is all-inclusive — meals, accommodation, transportation, etc. The only thing that is not included is your airfare to Reykjavik and return.

— The weather in Iceland is fickle. Usually at this time of year it is cool to mild, with temperatures ranging from 10 – 20 C (45 – 70F) during the day and a bit cooler at night. It also rains a lot. Sometimes it rains even more than a lot. There can be no guarantees about the weather. We will be shooting every day regardless of the weather.

— What we can guarantee is that we will take you to some of the most beautiful locations in Iceland, and in my opinion Iceland is one of the most beautiful places on earth. Imagine a cross between Scotland and Hawaii. Fiords, glaciers and ice fields, volcanic and thermal regions, moss covered hillsides and rugged mountains. Add to this more waterfalls than you can imagine, and extensive bird life, and you have the formula for great photography.

— The workshop will be open to anyone shooting either film or digital. Large format is not appropriate, because we’ll be moving quickly. There will be no film processing facilities available during the trip and you’ll have to bring all film with you and bring it home unprocessed. For those shooting digital there will be AC inverters in each vehicle that will allow for the charging of batteries and the running of laptop computers.

— This is not an "instructional" workshop. No classes, no lectures. But, it’s an opportunity to spend 24 hours a day for 6 days in the company of some very experienced and talented photographers who will be pleased to discuss every aspect of photographic technique and then help you to put it into practice.

— On the final day there will be a session in the hotel where each (digital) participant will be able to present their best 6 images for group review and commentary. A PC video projector will be provided.

— After the workshop members will be given a special page onThe Luminous Landscapeweb site where their best work can be exhibited.

If this sounds like it has your name on it, please fill in the wait list form. I expect to be able to announce a firm schedule and pricing by September, 2003 and at that point will give everyone on the wait list a first opportunity to register. When the twelve places are gone on a first-come first-served basis I will open up a second workshop for the following week with another 12 places available. After wait list members have had their opportunity if there are any places still available I will open registration to anyone that wishes to join. Based on past experience, my guess is that both workshops will sell outveryquickly.

The two best photographs from this shoot can be found separately inthis article.

A portfolio by workshop member Thomas Knoll is alsoonline.