RIPs, as many photographers know, are a replacement for the standard Windows or Mac printer driver. They talk directly to the printer’s hardware, for the most part bypassing the application and the operating system. Depending on their maker they also allow for sophisticated layout capabilities, enhanced colour and tonal rendition, superior B&W printing, and available profiles for a wide variety of printers and paper types.

I’ve been using theImageprint RIPfor the past several years, and I and others have written about it extensively on this site. A quick look at the site’sSearchpage will turn up all the appropriate references.

But, as good as Imageprint is, one still needs to leave the application one is working in,Photoshopfor example,Savethe file, and then locate the file to be printed either through the RIP’sOpenfunction or byDragging and Droppingfrom theFinderor other search tool.

I’ve often thought – wouldn’t it be nice to be able to print using all of Imageprint’s capabilities right from within any application?

ColorByte, the publisher of Imageprint, has now addressed this shortcoming though a software add-on that they call thePrint Through Application. This is for Imageprint 6.1, and is available from the company for $200. Currently only available for Mac OS X, a Windows version will be along some time later this Quarter. 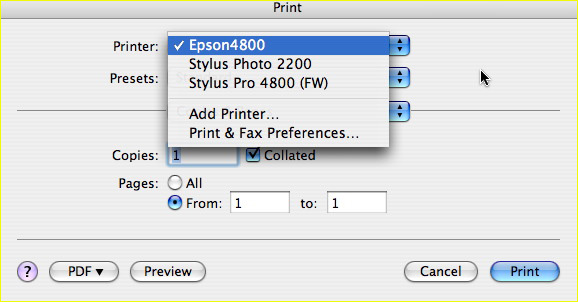 ThePrint Through Applicationsimply consists of a group of files that are placed in a certain directory. Once installed, the Operating System’sPrintfunction is informed that a new printer has been installed. This takes just a minute or two to accomplish. From that point on, whenever you go to print from within any application, it is as if you now had a new printer to choose from. In fact, it is your current printer, but with the Imageprint RIP handling the printing honours instead of the Mac OS’ driver.

In Figure 1 above you see that in addition to myStylus Pro 4800 (FW)I have a new entry calledEpson4800. This is that same physical printer, but addressed though the Imageprint driver. 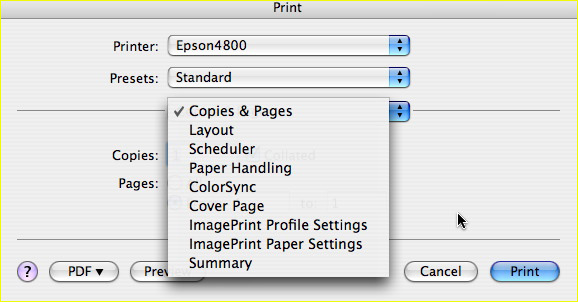 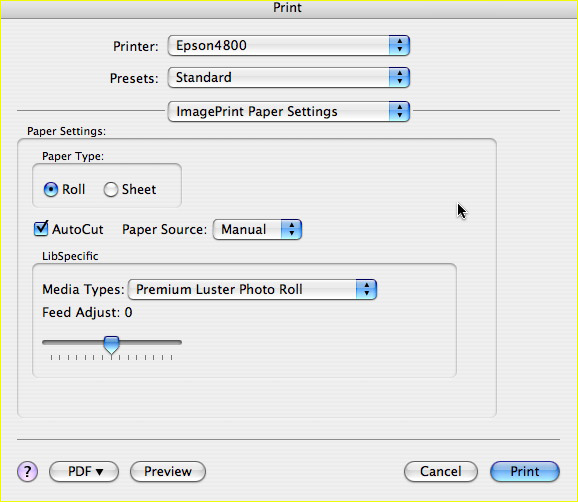 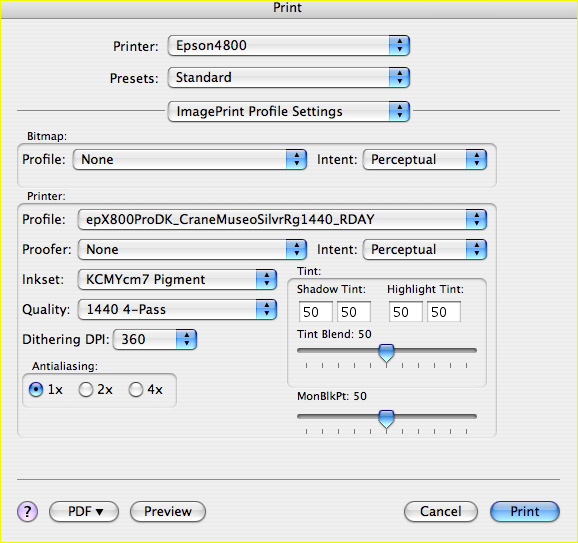 If you’re used to using Imageprint you’ll see that all of the standard controls, except those associated with layout functions, are contained within these two dialogs, and arguably in a more coherent manner than within Imageprint itself. The only controls that aren’t present are those that relate to page layout. These are handled by your printing application and the OS.

A note to those printing with Imageprint’s excellent B&W (gray) profiles from within Photoshop or Lightroom, or any application where the profile has not yet been embedded into a saved file. You need to be sure that in the box for Bitmap Profile, instead of it saying NONE, it shows a working space profile such as Adobe RGB. If your ImagePrint profile directly doesn’t have Adobe RGB in it, just make a copy from your ColorSync / Profiles directory and place it in the Imageprint / Color directory, and restart the program. Make sure that Bitmap Profile then shows Adobe RGB instead of None. 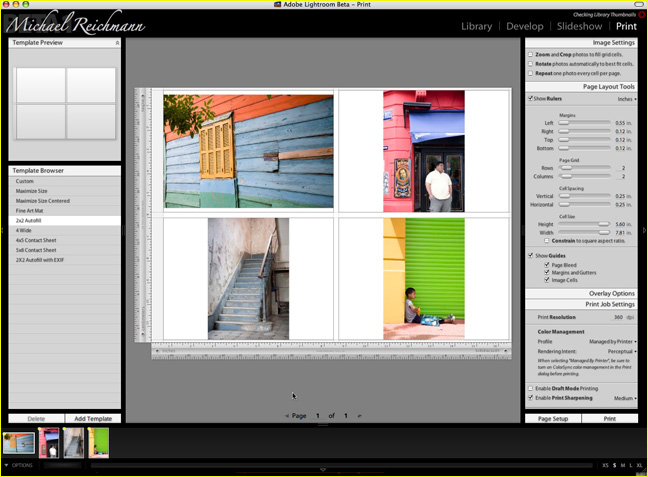 I’m a big fan of the layout capabilities within Imageprint, and find them superior to the standard layout tools in Photoshop. Imageprint still has an edge in absolute versatility when it comes to layout capability, but the Print module inAdobe Lightroomis really slick because it’s fully WYSIWYG. It is a joy to now be able to use Lightroom to print, and still be able to take advantage of Imageprint’s superior ink handling and profiles.

The ImageprintSpoolfacemodule remains the same and is available to perform its usual tasks.

My main and just about only concern with ColorByte’sPrint Through Applicationis that it is a bit slow compared to printing from within Imageprint itself. The file needs to run through the standard Mac OS spooler and then again through Spoolface, and so from pressing the Print button to the printer firing up takes a minute or two, compared to the rapid printing that one gets used to when using Imageprint alone.

If you own Imageprint 6.1 and use it on a Mac, then springing the $200 for PTA is well worthwhile. Windows users will have to wait about a month, and keep their eye on theColorByte web sitefor an announcement. Anyone that isn’t using Imageprint – well, what can I say? It’s expensive, but as I’ve been preaching for the past few years, it dramatically changes the way in which you print – for the better. 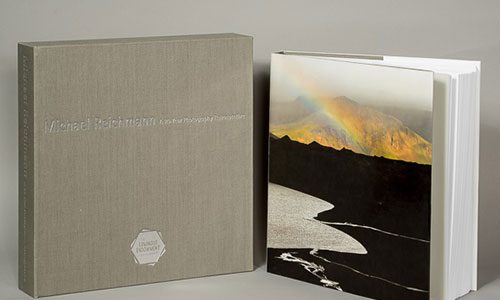 Self-Publishing: Joys and Headaches Reva Nelson is the copy editor for The Luminous Landscape website. This is her experience with Amazon’s CreateSpace self-publishing platform for