What makes the new Sony so interesting is that it’s the first digicam with an APS-C sized sensor, the size used in so-called reduced frame DSLR – essentially all of the current cameras from Canon, Nikon, Konica/Minolta, Pentax etc., with the exception of the Canon 1Ds series and the new 5D. 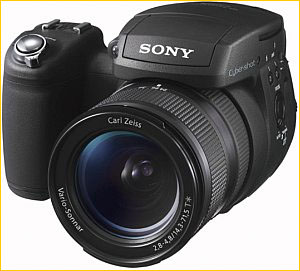 This may well represent a sea-change in the industry, because as reported by Phil Askey via Sony, with its dramatically larger sensor the DCS-R1 will have "…five times the sensitivity compared to the DSC-F828 and 2.5 times the dynamic range compared to the DSC-F828". In other words, this new digicam may well provide image quality comparable to that from current DSLRs, and with pixel density exceeding nearly any of the competition, digicamorDSLR.

Now, before anyone starts some silly online thread, misquoting me, let me be clear that I don’t regard the new Sony as "equal to" a DSLR, or in any way competitive with the 5D, even though they’re mentioned here in the same paragraph. But I do regard it as a significant challenge to all APS-C sized and 4/3 sized DSLRs in parts of the amateur, and prosumer market. There are a number of photojournalists currently using digicams, and assuming that the DCS-R1 has a decent buffer, and can shoot raw files with a bit more alacrity than its predecessor, the attractive but flawed F828, a broad spectrum of photographers including many pros may well find the Sony R1 very appealing. (My initial impression though is that the RAW buffer is too small and slow, and there clearly is no image stabilization – but that’s another story).

The 5D’s significance on the other hand lies at the other end of the spectrum, where it signifies that full-sized 35mm sensors no longer need command astronomical prices.

A Rolling Stone Gathers no CMOS

It should be born in mind that Sony designs and manufactures their own CCD and CMOS sensor chips, and is the supplier to many third party camera makers, including Nikon with the CMOS chip for their recent flagship camera, the D2x.

DPReview described the chip in the R1 as a "slightly smaller version of the sensor used in the Nikon D2X". Canon is the only other company currently enjoying the economies of designing and manufacturing their own CMOS sensors; with those chip’s high image quality, low power consumption, and price advantages. Sony is therefore poised to be become a major player in the higher-end digital camera market, and a potential spoiler for other camera makers.

Incidentally, Sony’s new CMOS technology not only appears in the excellent Nikon D2x but also in the latest of Sony’s new High-Definition video cameras, the HC1, where, as with the D2x, image quality is superb. Indeed many observers, myself included, report that the single CMOS-chipped HC1 offers image quality under normal light conditions fully the equal of Sony’s 3-CCD cameras, the FX1 and Z1, both of which cost considerably more than the new HC1.

It therefore doesn’t take a marketing expert to see a bifurcation coming to the marketplace. CMOS appears to now be on its way to replacing CCD in applications from the low end to the high end, simply through its lower manufacturing cost, lower power consumption, and fully competitive image quality. CCDs will likely remain entrenched at the very high end – medium format backs, and possibly as well with some camera makers who are unable or unwilling to source CMOS solutions.

Curiously, and not without some very real irony, if you read some of the trade literature from just a few years ago you’ll learn that CCD technology is what was used in the high end of the market, and that CMOS was mostly found at the low end, where low cost was needed, and where relatively poor performance wasn’t a sales impediment. Today in late 2005, it is clear that CMOS is rapidly taking over just about every market niche, including being used as the sensor of choice in top cameras from the two industry sales leaders.

Assuming that Canon (and by extension Sony) continue to be able to increase chip yields at the rate which we’ve seen over the past couple of years, thus reducing prices, there’s little reason not to believe that by 2007 we’ll see full-frame 35mm sensor-equipped cameras in the $1,500 range. Informed industry sources assure me that this is indeed likely.

This will have several broad-reaching implications. Among these are that the price differential between comparably featured film-based and digital SLRs will likely reduce to under $750 – simply the premium for the sensor and support electronics. Equally as significant, it may also mean the eventual reduction of the importance of APS sized DSLRs.

Why? Because the only reason for their existence is cost. When DSLRs were new on the scene and chip yields on large sensors were very low, utilizing smaller sensors meant that cameras could be made more affordably. No one out there wasasking forsmaller sensors, least of all quality conscious photographers. The camera makers simply had to adopt them so that DSLRs could be made at a price people could afford. Now, 5-7 years later, Moore’s law is applying its inexorable price/yield equation, and large sensors no longer command the extremely high prices they once did, making full frame 35mm cameras start to be affordable once again; the Canon 5D being the harbinger.

Does this mean that APS-C sized sensors are doomed to the dustbin of history?. No, of course not. Such cameras require smaller prisms, mirrors, shutters, and other physical parts, and therefore are somewhat less expensive to manufacture. Thus its safe to assume that there will always be a place for them at the lower end of the market. But prisms, mirrors and shutters are well established commodities, having been built by the tens of millions for the past half century, and so the differential isn’t as great as one might think, or as significant as that of the only really high priced component, the sensor itself.

Neither does the Sony R1 imply the end of digicams with smaller sensors. These will continue to allow for less expensive and especially smaller sized cameras, as the lenses for APS C sized cameras are of necessity larger, adding both cost and mass.

What About Four Thirds?

Though I know these are fighting words, I’m afraid that I regard the 4/3rd concept is an evolutionary dead-end. A -2X sized sensor may have made some sense five years ago when 35mm sized sensors were nearly astronomical in cost. But now this differential has shrunk dramatically, and will continue to do so. The promised smaller size of camera bodies due to the use of smaller sensors is modest at best. For example, the Olympus E-1 is only 150 grams lighter than the Canon 5D. True, Olympus lenses are smaller and lighter, but this hasn’t turned out to be all that compelling a sell.

Interestingly, the Sony R1 actually weights more than the Canon 5D, though of course the R1 has a lens included, while with the 5D you put on whatever lens you wish. The point isn’t to compare these two cameras in any inappropriate way, but rather to consider that when it comes to camera size and weight there are certain factors of mechanical and human engineering that mediate a common point around which such designs will tend to cluster.

So, we have someone that buys into the 4/3 format in late 2003 or early 2004. They also buy several lenses for this format. But what happens in 2005 and 2006, and onwards? We will undoubtedly have imaging chips ranging from a 1.5X factor to full frame 35mm that don’t cost all that much more, and you can be certain that companies like Nikon and Canon will be making cameras that use them, and which can utilize the huge existing inventory of full-frame coverage lenses available.

Anyone owning 4/3 format lenses then will have no escape. They will be limited to using cameras with a 2X magnification ratio because their lenses are unable to cover a larger image circle. If we assume that the price differential between small and medium sized imaging chips is going to decrease, then a 4/3 based camera will always suffer from smaller images or lower image quality by comparison, because while the number of pixels can be increased (this is accomplished by making the pixels themselves smaller), by making them smaller image quality is reduced. It’s just physics. Anything that Kodak does to the 4/3 format chip can also be done to larger ones, so the differential will remain.

It seems to me that history is about to repeat itself. Olympus was the champion of the failed but elegant little half-frame format of the 1960’s, and now appears to be heading down the same path. A shame really, because the E-1 is a very fine camera in many ways, and deserves better than to be built around a format that, like half-frame, may turn out to be just a footnote in the history of photography.

I was wrong in 2003 about Nikon. They never did go full frame – at least not yet.

Over its more than 150 year history, photography has moved forward by fits and starts. Milestones included the huge popularity of so-calledminiatureformats in the 1930’s, eventually leading to the domination of 35mm; Kodachrome and eventually E6 process colour film in the ’50s, SLRs in the ’60s, and TTL metering, autodiaphram and autoexposure on the 70’s, with autofocus coming on strong in the late 80’s and early 90’s. Then, the beginnings of digital in the late 90’s. These all changed the face of photography dramatically.

The first five years of the 21st century have seen digital cameras almost totally replace film in many professional applications, and move toward industry domination in most amateur markets as well. Companies that misjudged the marketplace are being swept aside, as they are in most industries where microprocessors are replacing previously analogue and mechanical processes.

Will I be right about the decline of reduced frame and 4/3 sensors in DSLRs? Will the Canon 5D turn out to be a harbinger, or an anomaly? Will manufacturers other than Canon be able to produce full frame 35mm DSLRs at competitive prices? Will Sony carve a solid niche for itself with APS sized sensor digicams, either the R1 or something else down the road?

I have my guesses. I’m sure you have your own. Everything is in a state of flux. Isn’t it fun to watch and speculate though?

Seven of The World's Leading Photographic Instructors   "Having been to Antarctica with Michael and Kevin, I would say after having traveled the world and

FacebookTweet The before and after image screenshot that is shown here was taken in 2019 in Montenegro on an Explorelight workshop https://www.explorelightphotographyworkshops.com/     It