For some further observations on equipment used on this trip, driving in Italy, and what this year’s well equipped tourist is shooting with, have a look at the page entitledA Digital Travel Kit. It also discusses the inadvisability of combining a holiday with doing serious landscape shooting.

Two additional images can be found atItaly Redux. They are each strong examples of the incomparable light found in Italy. 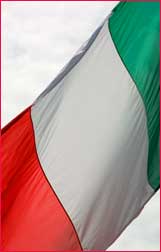 Travel photography is a genre that IÃƒ­m not that familiar with. But, like every other photographer I take photographs when I travel for pleasure, though I have rarely published them.

I have found that this type of shooting has elements of landscape photography as well as photojournalism, so it isnÃƒ­t that dissimilar from what I usually do now, or have done in the past when I made my living as a photojournalist. 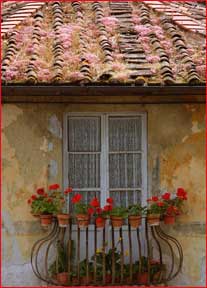 A trip toItalywith my wife in the spring of 2001 was an opportunity for me to try my hand at some current travel photography.  This portfolio contains some of these images as well as locations notes which you may find of interest.

Be aware that this is not a travel guide but simply my visual impressions and commentary on a unique part of the world.

This fresco on a church interior inPisais from the 11th century. It shares the same colour palette as the exterior wall and roof of a home inLuccatoday.

Please note that the small images framed in red arenotlinked to larger versions
As elsewhere on this site, yellow framed imagesdolink to larger photographs. 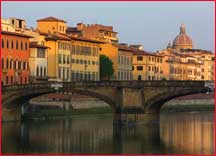 Florence(Firenze) was at the heart of the Renaissance. One of the oldest cities of north-central Italy it is the most popular tourist destination after Rome. Great art, great food, superb wine and magnificent architecture come together in a crowded, noisy and wonderful city unlike any other. 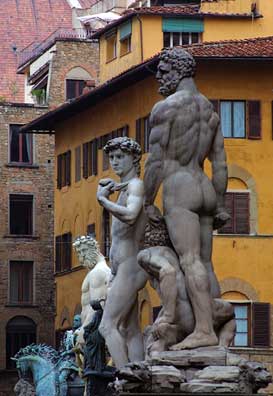 Tourists out of Time, Florence: May 2001

Florence’sUffizi Galleryhouses the world’s finest collection of Italian Renaissance painting. It’s always crowded and reservations are a must to avoid lengthy line-ups. Even so it’s a sublime way to spend a half a day.

The crowded and bustling square in front of the museum features these heroic sculptures, which struck me as being themselvestourists out of time. 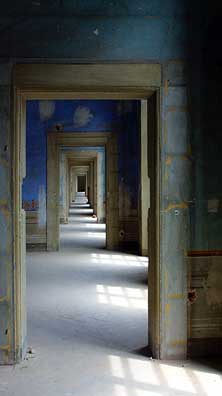 The Uffizi Gallery was once a Medici palace and later housed their art collection before becoming the world’s first modern museum. In addition to being home to some of the world’s greatest paintings the palazzo itself is magnificent, with outstanding frescoes and gilt decorations in many of the gallery rooms.

One entire floor though has been deserted for hundreds of years and is just now being opened for gallery expansion. This photograph captures for me, with its infinite receding doorways, the almost palpable sense of time that the building’s space and its artworks conveys.

When I travel I’m usually an early riser; dawn or before. In European cities first-light is a great time to explore and view the architecture without the distractions of crowds, open shops, and the perpetual din of motor scooters. 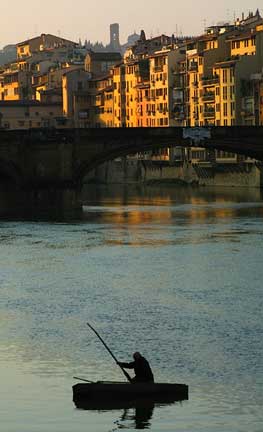 The Arno river as it runs through Florence regrettably appears as polluted as any river in Europe. During three days there I saw but one person fishing, an elderly gentleman who would venture out at sunrise each morning in a rickety wooden boat.

This photograph of the south bank of theArno Riverwas taken from my hotel balcony. It was just before sunset and the muted colours nicely match the feel of the city’s palette.

It was composited usingPowerStitch. Three frames shot at about a 35mm focal length were used, and were overlapped when shooting by about 30%.

Though only 3 frames were used in the image immediately above, I actually shot a 7 frame sequence covering 180 degrees. This photograph was stitched from all seven frames. While it’s fun, it is really too wide, and the perspective is consequently confusing because it encompasses far more than the human eye normally can take in.

If you click on it to see a larger image you will have to scroll to see the whole thing as that version is about 15" wide. 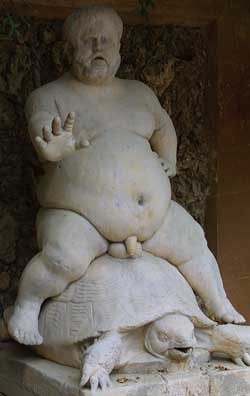 Art in Florence ranges from the sublime to the ridiculous.  This wonderful fellow is found in theGiardini Bobolioff thePalazzo Pitti.ThePittihad on a superb exhibit of jewelry through the ages but the gardens themselves were a disappointment.

Tuscany is a large region encompassing much of central Italy along with several cities such asFlorence,PisaandSienna,as well as countless small hill towns. It has long been a favourite vacation spot for Europeans as well as North Americans.

Renting a villa or farmhouse in the hills of Tuscany is a fine way to become immersed in the local culture as well as providing a base for exploration of the region. The view above is from the patio of the farmhouse that we rented near Lucca in May of 2001. Landscape photography literally from ones doorstep.

Lucca is an archetypical medieval Tuscan town. A walled city with ramparts, it’s hard not to fall under its charm. We walked the streets for hours, shopping at the Sunday antique market and stopping at piazza cafes for cappuccinos and people watching. 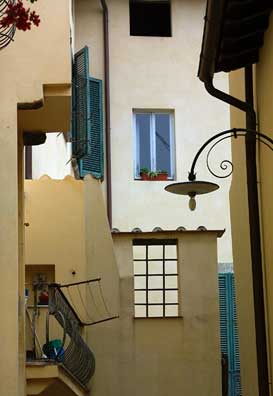 I took particular pleasure in photographing the intimate details of the local architecture. Lucca is no museum. It’s a lively town that caters both to the tourist trade as well as modern commerce. 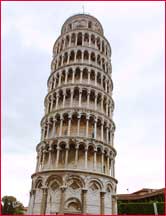 Pisais a medieval city that once rivaled Florence for military and political power. It is of course famed for itsToro Pendente(Leaning Tower), a tourist attraction since the 13th century. I had been forewarned that Pisa’sCampo dei Miracoli(the location of the tower-cathedral complex) was tacky and commercial. It was. But! 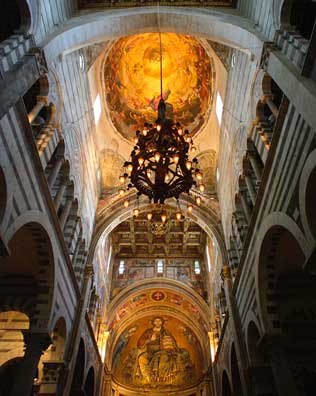 Instead I found it be dramatic in its splendor. Sure, the venders with their fake Rolexes are there, and the busloads of noisy, pushy tourists are a pain. But ignore them all and soak in the magnificence of four of the most beautiful buildings ever made by man.

This is the ceiling of the Duomo(cathedral). 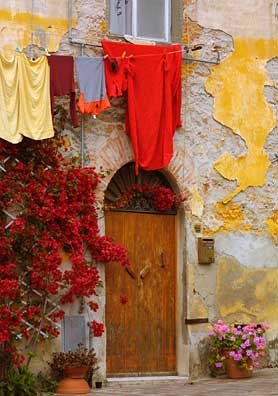 Halfway on the drive fromPisatoLuccaand lies the unremarkable little town ofSt Giuliano. There I found this building entranceway which encapsulates for me the unselfconscious joy of historic Italian architecture and traditional lifestyle. Colour here is a way of life, just as are the region’s simple but great food and wine. This accidental set-piece is no less beautiful to me than the cathedral dome above.Bella Italia!

For some further observations on equipment used on this trip, driving in Italy, and what this year’s well equipped tourist is shooting with, have a look at the page entitledA Digital Travel Kit. It also discusses the inadvisability of combining a holiday with doing serious landscape shooting.