Jim is a native Californian but has been living in Kamakura, Japan, the capital of the first Shogunate 800 years ago, for the past 2.5 years. Although a researcher by profession, he is a serious amateur who primarily focuses his photography in Japan on temples/shrines, gardens, and landscapes. Jim often travels within Japan or overseas for photography, including SE Asia, the American Southwest, Canada, and Europe. "For the past two years, I’ve been studying the Japanese way of tea. It’s really about the seasons, meaning flora and climate, and heavily draws from Zen Buddhist themes in terms of its simplicity, delicacy, and beauty. This has influenced my photography in the way I view nature and notice subtle details, textures, and patterns."

I took this shot from a panorama lookout in the mountains overlooking Lake Yamanaka, one of the Fuji Five Lakes, on a cold morning following a day of snowfall. As I had brought my full complement of medium format equipment in my backpack, I decided to use the 6×17 panorama. Upon mounting it to the tripod, I peered through the viewfinder and just thought, "Wow!" As it was still snowing in the Southern Japan Alps (far background), the sky was reflecting tones of orange, pink, and lavendar until just after sunrise. I managed to capture the alpenglow striking the snow-capped peaks in a sequence of images. In my opinion, this wasn’t my best image of the sequence, but as I didn’t want to risk having my best image damaged, I used an image I deemed that was almost as good (hey, you can only change film so fast when it’s 5F!). In this photograph, you can also see the sunlight just beginning to shine on the second tallest peak in Japan in the Southern Alps range.

The summit of Mt. Fuji is snow capped from early winter through June. During much of the winter, the summit often sees strong winds. As this was the day following a storm, the northerly winds from Siberia are blowing the snow to the south face, where much of it accumulates. As there was not much snowfall in December, the hiking and access trails on the eastern slope are clearly visible. 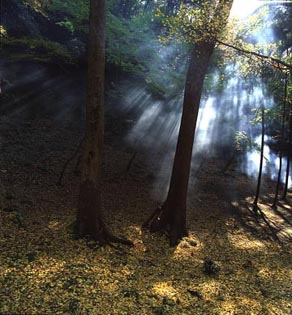 Photography here in Japan often has a herd mentality. Photographers often cluster in one spot, sometimes thirty or more surrounding one tree. The most annoying thing is after finalizing a composition, people walk up to you and try to snap the same shot. On this day, a large group of photographers were shooting the maples with some of Kenchoji’s buildings in the background. As I live nearby, I was here to test some films and a new lens, so I decided to walk to the rear section of the temple complex and up the mountain, where there is a forest, no buildings and few people. There was a groundskeeper who had raked fallen gingko leaves into a pile and set them ablaze, casting billowing clouds of smoke into the air. He was about finished when I arrived, so I had just enough time to find the right spot on a staircase half way up the mountain, set up the tripod, select the lens, and to take two shots before the last of the smoke dispersed. As metering in this lighting was very tricky and there was no time, I relied on my camera’s excellent meter, which gave an exposure that captured the vegetation growing on the rock face in the far left background. 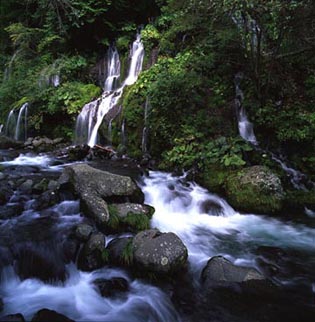 Kiyosato is of a copy of a Swiss alpine town set near the Southern Japan Alps and known for views of the surrounding mountain peaks. Unfortunately, on this day, the mountain peaks were nowhere to be seen. As this was a group trip with companions from the tea ceremony group to which I belong, I only brought a minimum complement of photo equipment. Upon seeing this waterfall, I immediately knew the shot I wanted to take and the appropriate lens.

Photographed with a Rollei 6008 integral, Schneider 40/3.5 Super-Angulon with a Heliopan UV filter on Velvia, September 5, 1998

Lake Yamanaka and the other Fuji Five Lakes are resort areas for Tokyoites and other persons in Eastern Japan who wish to get away for a weekend. It’s most popular and crowded during the summer high season. Winter time sees skiers, but as this winter had little snow until February, most inns were nearly deserted. There is a cove at the far end of the lake which can offer some good photographic opportunities, especially if there’s heavy snowfall and the lake is covered with snow over ice. Due to a mild winter, I wasn’t that fortunate. However, on this day, it did offer the most shelter from the wind and, hence, the smoothest water. Following a spectacular sunset, the water calmed down just enough for a good reflection. Venus can be seen setting to the upper left of the summit.

A new portfolio of photographs taken by Jim in the Western U.S. is featuredhere.

Few lenses intrigue nature photographers more than super telephotos — 400mm to 600mm lenses with apertures of f/4 or wider. These are serious lenses, both