Many aspects of photography require specialized tools. Wildlife photography is one of these, and there are quite a few products available to make the photographer’s work simpler, safer, faster and more efficient. This review reports on two products which I used for the first time on aSafari / Workshopwhich I co-lead in Tanzania in January, 2004.

Working with long lenses, such as myCanon 500mm f/4L IS, means having to deal with a large, heavy and sometimes awkward bit of kit, that while essential for getting high-quality wildlife photographs can be a real pain (literally) to use.

Big solid tripods and specialized gimbal mounts help make this easier when working in the field. I have previously written about both theWimberly Sidekickand the full-sizedWimberly gimbal mount, both of which I own and regularly use. But shooting from within a Land Rover while on Safari requires different solutions. 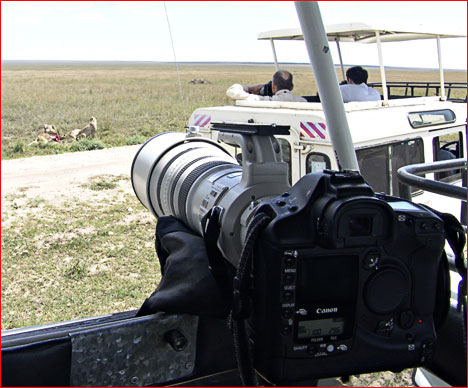 Andy Biggsand I provided everyone on our workshop withKenesis SafariSackbeanbags. These do a great job of cradling long lenses, providing needed stability and protecting the lens from marring on the sharp edges of the safari vehicle’s roofs. As good a solution as these were, they didn’t solve the problem that those of use with larger lenses encountered, which is the need to constantly hang onto this heavy equipment — heaving it up into position and then back down again. Unlike as seen inFigure 1above, one can’t leave a setup like this unattended, or some $15,000 worth of lens and camera can easily fall 8 feet to the ground, as happened to one of our workshop’s photographers.

Anticipating this problem I brought with me aKirk Window Mount, and also a new gimbal head fromJobu Designcalled theBlack Widow. The Kirk mount has been around for a while. The unit that I used is the new second generation design. It is beautifully machined from black anodized solid 6061 T6 Aluminum. The online price is U.S. $240. This mount is designed to attach to a vehicle’s partially lowered window, and together with a ballhead or gimbal mount (not included) provides a solid platform for cameras and large lenses when working from inside a vehicle. 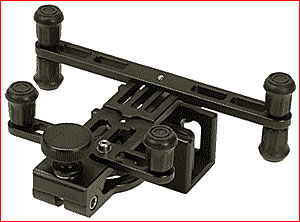 I only found one flaw with theKirk Window Mount, but it was a biggy. As you can see above inFigure 2the Kirk is attached to the open edge of the Land Rover’s roof. After 3 days of this the retaining clamp gave way, and when the whole mechanism was removed from the roof for repositioning it was found that the pin that holds the screw thread to the movable part of the clamp had sheered.

InFigure 4below you will see a close-up of how the clamp was bent due to the need to attach to the irregular shape of the roof edge. This is what caused the failure. Attaching the Kirk to a window would never cause this to happen because both side of a pane of glass are parallel. But the irregular shape of a safari vehicle’s roof caused the movable part of the clamp to bend to an acute angle, which caused the pin to snap. 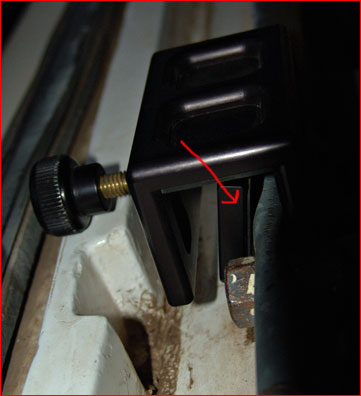 I have not yet had an opportunity to discuss this with Kirk, but given their history of constantly redesigning their products based on user feedback I am confident that the design will be changed to accommodate this problem. Otherwise I found the Kirk Window mount to be an indispensable tool for working with long lenses from inside a vehicle. 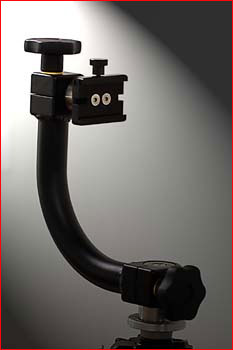 Just a few weeks before leaving for Tanzania I was asked byJobu Designsif I would be in testing their new gimbal mount, theBlack Widow. What immediately appealed to me about this design concept was that it was significantly lighter and smaller than the largeWimberly, yet unlike theWimberly Sidekickwas able to comfortably handle a heavy lens like the Canon 500mm f/4.

In use in Tanzania theBlack Widowproved itself to be everything that it promised — well built and relatively light weight (given its performance). My only concern is that the retaining screw that secures theArcastyle mounting plate vibrated loose on the first day. This was with no lens attached. Luckily I found it on the Land Rover’s floor, and was careful thereafter to make sure that it was always tightly cinched closed, even when not in use. I am told that all current product has a new retaining screw to prevent this.

Update:Feb. 2004. A number of changes and improvements have been made to the Black Widow, including the addition of a retaining screw. A very good product has just been made even better.

While theBlack Widowsdesign is somewhat unconventional, I had no problem with either the control knob layout or use. For anyone that is looking for the absolutely lightest weight gimbal head able to handle a 500mm f/4 or larger lens, I can recommend this product. It sells online for U.S. $399 with free shipping to anywhere in the U.S. or Canada.