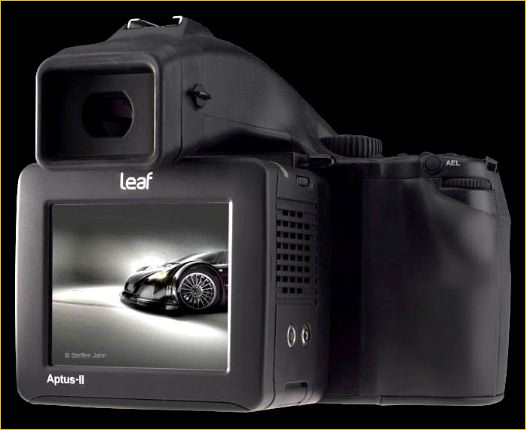 Amplis Photois the Canadian distributor for a number of professional photographic products, includingHasselbladandCreo-Leaf. In early May, 2005, thanks to Amplis, I had an opportunity to spend several hours examining a pre-productionAptus 22in the company ofIlan Carmi, Leaf’sProduct Marketing Managerfrom Israel.

The Aptus, which I am told will ship before the end of May in mounts for Hasselblad H and V models as well as the Mamiya 645, and the Contax 645 about a month later, comes in 17 and 22 Megapixel versions. While the model that I had a chance to examine (though in a limited environment), did not have its final firmware, and therefore several functions were not fully operational, in most respects the back was just about ready for prime time and so worthy of a first look.

And worthy it appears to be. First shown last fall, and originally scheduled for February shipment, though several months late the wait appears to be have been really worthwhile.

Here are the basics…

– Each back is specific to a given camera model

– Completely self-contained with CF card and battery onboard 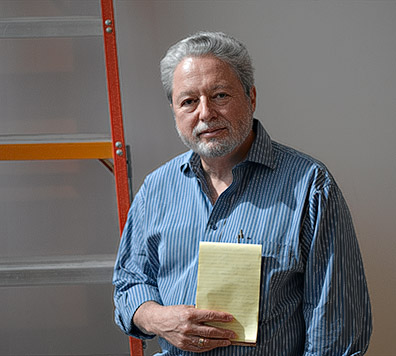 Your intrepid reporter photographed with the Aptus 22, under window light.
Neutral, pleasing, and accurate colour are noted.

The Aptus back that I examined was mounted on a Hasselblad H1. It also had a 20GB digital magazine attached, and so was quite a handful. But, the back alone isn’t that heavy, and when mounted on any of the 645 or 6X6 cameras, will be no more of a handful then its prime competitor the Phase One P25. In fact 35mm DSLRs like the Canon 1 series are almost as massive. Not something you want to hang around your neck or carry all day, but manageable for long periods of hand-held shooting nevertheless.

The first thing that catches your attention about the Aptus is its drop-dead screen. Compared to anything else on the market it is eye candy – big, bright and offering high resolution. My first thought was that it was akin to looking at a 6X7 transparency on a light box. Unlike rear-LCD’s on any other camera or digital back so far, this truly can be used to evaluate image quality. And, when combined with the fact that this is a touch-screen – a double tap with the integrated stylus (just like used on a PDA, even with its own recessed slot for storage), calls up a 100% magnification image which can be scrolled at will.

In studio and strong north-light window conditions the screen was extremely bright and visible. I was unable to test it in bright sunlight, but it appears that one would have to shade it to really see it properly in direct sunlight.

The screen’s menu system is very deep. By this I mean that a great amount of control is possible directly on the back itself. It’s almost as if one has a complete tethered computer available for system settings. Even annotation of files is possible with an on-screen keyboard accessible for typing.

But, as with anything that offers depth, there is also complexity. This is aided somewhat by a "user button" on the upper right hand size of the chassis, near ones thumb. This can be programmed via the touch-screen to perform any one of a number of functions.

A detailed look at how effective the back’s control system is when working in the field will have to wait until I have a chance to try it under less constrained conditions.

Of course the Aptus has a Firewire port, and can be used as can any other medium format digital back in a tethered configuration. When shooting tethered, to a Digital Magazine, or a CF card, the Aptus appears to be capable of shooting at just over one second per frame, and is able to do so on a continuous basis. (1.2 sec / frame is claimed). This appears to be almost 75% quicker than the Phase One P25, the only other self-contained 22MP back currently on the market. The reason for this is that the Dalsa chip used in the Aptus has two channels feeding data, while the current Kodak chip as used in the P25 has just one. Leaf is claiming 17 MB/s via Firewire, and up to 12MB/s via the back’s internal CF card slot. Obviously one will want to use only the fastest and biggest cards available.

It needs to be noted that the CF card slot on the pre-production camera that I used was not operational. Apparently Leaf has had to source a new supplier for this, as the one that they had hoped to use didn’t run fast enough to keep up with the data flow.

Both in the formal presentation and private discussions Leaf representatives made the point that the back is actively cooled, using a built-in fan, and that this will help ensure component longevity as well as low signal noise.

Indeed, the Aptus has large vents on either side through which air is passed by the fan. The fan is very low noise. In fact, the Phase P25, which does not have a built in fan, can be somewhat noisier because of a high pitched hum which is sometimes evidenced. The fan sound on the Aptus is low pitched, and therefore almost inaudible.

It needs to be said that after about two hours of continuous use, the chassis of the Aptus felt only slightly warm to the touch. My experience with a P25 under similar ambient conditions is that even though it has no fan, it never felt any warmer than this either.

My concern in this regard though is that the air vents on either side of the Aptus are large, and unfiltered. In a studio environment this may not be a big issue, but out in the real world it well could be. Shooting in a dusty environment, such as factory floor, could well lead to a build-up of crud inside the back. If there was some way of filtering these vents that would seem to be desirable. A P25 back, by comparison, has no active vents for airborne particles to enter. 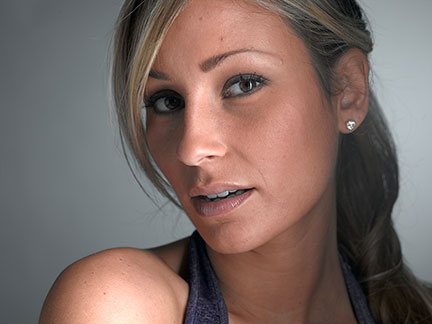 I can’t really say anything definitive about image quality because I wasn’t able to do any testing under controlled conditions. But, looking at some model shots taken that day (at ISO 50 under studio flash), what I see is a spectacularly clean, sharp and colour-accurate image. 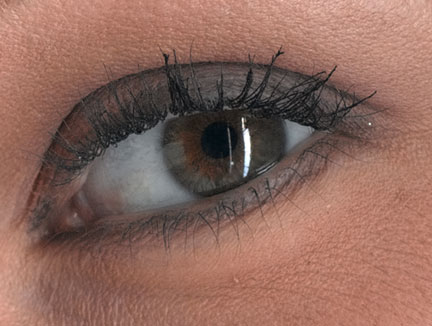 100% crop of the previous frame

Naturally, anything beyond this superficial observation is going to have to wait for a more complete hands-on test, but what I did see impressed. 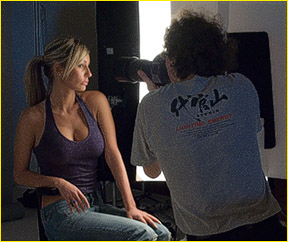 Why some men become photographers

The Aptus uses a Sony-type Lithium Ion video camera battery that fits snugly underneath the chassis. Leaf has strong claims for battery life, but it will take a real-world field test to see how this pans out.

The Aptus retains the Bluetooth connectivity of its predecessors, which allows thumbnails of shots taken to be transmitted wirelessly and almost instantly to a nearbyCompaqPDA for image review. Also, the PDA can be used to control numerous back functions. These capabilities are now essentially replicated on the back’s large screen, but this capability can be very handy when working with an art director or client, so that they don’t have to hover over your shoulder when working on location and untethered.

I noted that the Aptus took alongtime to boot. I’m told that when units ship the boot time will be down to about 10-12 seconds, but this remains to be confirmed. I didn’t note if the back has a "sleep" mode, and if so how long the wake-up time was.

The ability to control the back’s shooting environment is quite extensive, and fairly easily controlled. For example, one can call up either a large or a small overlayed luminance histogram as well as a tri-color version. And, the transparency of the overlay can be controlled. Now, that’s nice!

As soon as Amplis and Leaf are able to get me an Aptus 22 for testing I hope to have a more comprehensive report online.

In the meantime, Leaf now joins Phase One with state-of-the-art and self-contained 17 and 22 Megapixel backs. Will Imacon have something soon in this category? What will Phase One’s response be?

Stay tuned. These are exciting times for professional photographers and their photographic tools.