… the tools of the photographer changed at glacial speed. It was not unusual to see a photographic equipment manufacturer come out with only one major change in their camera line or film products every 10 years.

Today, we are on an 18-month technology cycle based on the great fuel of the modern era – the semiconductor.

It is easy to get caught up in the insanity of the moment-to-moment changes in camera technology, figuring that it has something to do with the art of photography. In fact, our technologies are just tools. The art of photography comes from the creative perception and mastery of the medium by the artist. I would suggest that this is an issue of personal journey and not an issue of tools.

I am a fine arts photographer by profession (www.petemyers.com). I offer no bias between shooting digitally or on film. I have done both successfully and have found in my own work more compelling issues in regard to my photographic tools – the lens, being for me, the heart of photography.

But I am afraid to see the hype of megapixels and dSLRs drowning out the important revolution to the art of photography — which has little to do with the camera. To me, the real revolution is in what the computer has brought to the capabilities of the photographic artist in postproduction.

I am 45 years old. When I was a mere lad of 16, I was under contract by NASA to provide electrical engineering support services. Yes, I was one ofthosekids. I continued to consult with them for over 12 years. I literally grew up at NASA.

I was astonished when I started to learn the math and electrical engineering behind our early space probes as they made their way out through our solar system. What I learned was that the data telemetried to Earth as seen from the image sensors on these spacecraft, had little to do with the pretty images that we made up from this data to show the public.

The images we showed the public as these spacecraft flew by distant planets was not a lie, but simply an interpretation of the data from the spacecraft’s sensors. It was extremely brilliant work. Simply, the idea was that the image sensors on the spacecraft could actually see better than we could. We used math to transform the data from the extreme scale of space, to meet the limited capabilities of the human eye.

Thirty years later, and now everyone has the image processing capability of NASA on their desktop computer. And our photographs, whether they originate digitally or on film, often exceed our eye’s ability to resolve the image. Once again, we can turn to the computer to interpret the data to fit it into the optimal range for the human eye. But we can also do so with the thought of bestowing our image with the qualities of beauty in the same process. And this is where we go a few steps beyond even NASA.

What I am suggesting is that the real power of photography in our modern digital age is in using the computer in making an image.

Takingan image andmakingan image are two completely different animals. What I often see in landscape photography are photographers taking beautiful pictures, and performing minimal work on the image in postproduction before printing the image. For these photographers, they believe that their work relies on mastering the tools at hand – the camera and lens – and using them to best advantage in the field – not working on the image in postproduction. 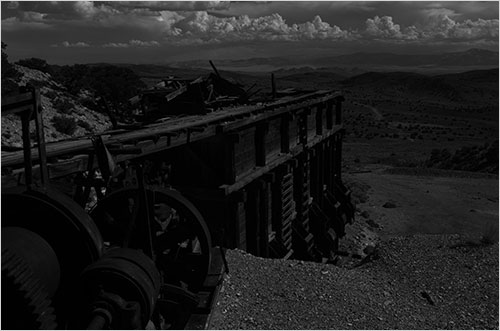 The image above is the raw, linear TIFF image from my Kodak DCS 760m (monochrome) camera. I have reviewed this camera previously for this site –click here.

What greeted me out of the camera certainly was a ghastly sight of doom and gloom. But as many of you have experienced for yourselves, it only takes a few minutes of Photoshop time to transform the image into a more recognizable form, as shown below. 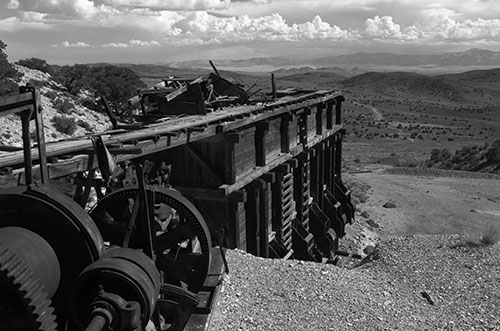 However, for my work, this is the beginning of my image making. I really don’t care all that much about what the picture looks like that I took in the field — I care about what I can make of the image in postproduction. Certainly that does not excuse me from doing my best in taking a picture in the field, but the point is what happens in the field is not an end all – it’s a beginning.

The final image below, entitled “Frisco”, is the image that reflects how I felt at the time I was in the field at the scene. As you can see, it is not the literal image that my camera saw. I would caution that it is extremely difficult to see the complete impact of the final image via a web sized JPEG. 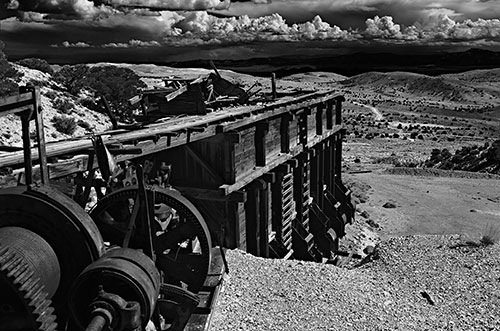 What has occurred between the beginning and end is a considerable effort in postproduction — in taking apart the original digital image section by section, and transforming the image into what I saw in my mind’s eye. This effort represents many days of work on the computer — days and days and day of effort on one image— not just a few minutes or hours.

The image below shows a small area of the clouds from “Frisco” in detail. It simply is impossible with web sized JPEGs to fully appreciate the final fine art print of this image. Hopefully, seeing a bit of the detail from the image will provide a hint of the beauty of the entire final picture. 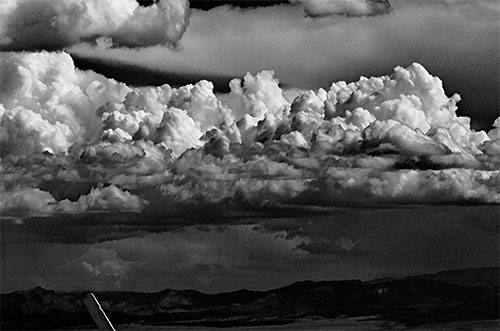 Some of you maybe disappointed that I do not dole out some secret formula for systematically transforming the image taken in the field, to that made in postproduction. I am afraid any efforts that I could suggest would be case specific and not subject to reproduction. Every artist has their own technique and approach to their medium, and it is virtually impossible to teach. I can only suggest that it’s an effort of self-discovery and there is no substitute for long years of self-learning.

And I feel that is why most photographers do not avail themselves of what I perceive as the true revolution of the digital photographic era – making images in postproduction. Simply put, it takes an amazing amount of time and effort to master the medium and then master the image. Instant gratification is much more appealing to many then taking the long route of practice, practice and practice.

I am not suggesting that all forms of photography or photographers need to get so involved in their postproduction work as I do. I am an artist first and foremost – an artist that just happens to use photography as his medium of creation. My bases of involvement with my images may be rather extreme.

But my work does suggest that perhaps photographers should slow down and spend more time with their cherished images. What comes out of the camera may not be obvious in view. It is what the photographer felt when he or she took the image that becomes compelling to what can be made of the image. Often, all it takes is time, effort and love of the subject matter to transform a dead image into something alive and vibrant. This is what I would like to encourage.

I leave you with one final image, “Tornado Ranch.” The image was made in 1994. Out of all my portfolios, this image still ranks as a favorite amongst my clients. I comfortably make 20” width prints of “Tornado Ranch” and on occasion, even 30” prints. 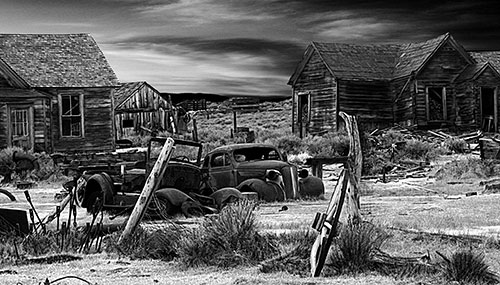 Let us examine the “high technology” behind the making of this image:

The image was shot with a Nikon 4004, 35mm film camera with a 70-200mm vario AF Nikkor lens. To put it in perspective, the lens has all the optical qualities of a glass “turd.” The film used was Extar 100 color negative film. The image was shot in overcast conditions. The negative was scanned to a Kodak PhotoCD as a 3K x2K, 24-bit color image (8 bit color plane depth).

Postproduction was conducted in Photoshop 2, which was capable of 24-bit color (8 bit black and white). There was no Wacom tablet – I used a mouse for all the handwork. The computer was a Mac IIfx with a whopping 40 Mhz, 16 bit processor and 16 megabytes of memory.

How long did it take me to make “Tornado Ranch” in 1994? Weeks and weeks and weeks. And the point is that I made this image from a weak photographic negative with the tools that I had in front of me at the time. The digital postproduction tools of that era where primitive in comparison to what we have available now — and yet the image still holds up today. It wasn’t superior technology that made the picture.

I do like faster and more powerful computers. But as my wife, Kathy, will tell you, all the faster computer and better software does for my work is it allows me to get into even bigger trouble. Many of my images still take weeks of effort on the computer. All I have gained with the speed and improvements in hardware and software is more precision.

I hope this article has helped you to put a bit of perspective on the hype of the modern digital camera as the end-all in photography. Cameras do not take pictures — photographers do. Most photographers do not make pictures from the pictures they take. The tools that are the most powerful are often not the most regarded. Believe in yourself and what you feel inside and you have found what is most valuable to your image making. Use the tools at hand to get those feelings into your image. You can do it! It just takes time and the love of the image.

Face in The Trees

Long Exposure With A Purpose

FacebookTweet Long Exposure photography has existed since the days of the first images recorded, however, today Long Exposure, or should I rephrase and say, Daytime