One of the hoariest old chestnuts in photography is the statement immediately above. Every time I read it chills run down my spine. It seems that whenever someone asks on an online forum whether lens A or B is superior, or if camera A is better than camera B, someone drags out this ancient aphorism. Its purpose, I suppose, is to show superiority of intellect, but basically it’s just plain wrong-headed. 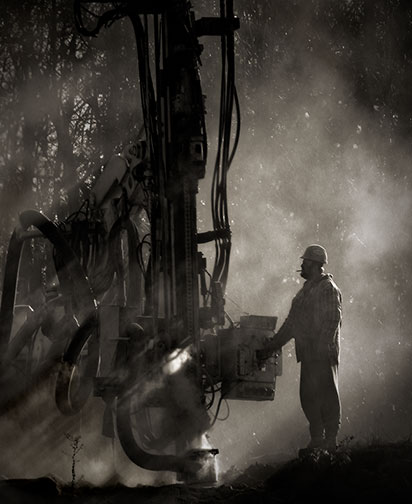 Photography is both an art and a craft. One can not deny the craft side, or if one does, one reduces photography to a hobby at best. Nothing wrong with a hobby, or pictures of ones cats and kids. But we’re not here to discuss that aspect of what people do with cameras, any more than we’re interested in discussing the camera onboard the Mars Rover.

A photograph is an amalgam of the photographer’s talent and equipment, as well as light, atmospherics, and of course, subject. All need to be present to some degree. Let’s take the photograph above as an example.

I was driving along a major divided highway in Northern Ontario. It was a clear sunny day, but in the distance I saw a huge cloud of white dust. As I got closer I saw that it was caused by a huge drill working on Precambrian Shield granite, preparing blasting holes for highway widening. As I pulled onto the verge opposite the action I thought of reaching for my Hasselblad H2 with P45 back, long lens, and tripod, since they were in the trunk. I was returning from conducting a weekend workshop, so had them at hand. But given that the verge was narrow and 16 wheelers were flying by at 120 km/h, I decided that my ubercamera was not appropriate, and instead reached for the Canon G7 digicam which was on the back seat. I rolled down the window, zoomed to maximum extension (210mm equiv) and took a half dozen hand-held frames as the dust swirled around the workman.

With that as background, let’s look at what makes this a somewhat successful shot.

Yup, interesting to be sure. Strong contrast between the workman and his drill. Majestic size. Man vs machine. Foliage as uncluttered backdrop. Not a bad set of ingredients.

Low angled late-Fall light. Rays at 45 degrees. Not to "toppy", even though it was getting close to mid-day. Nice and directional, adding character.

Not the usual sort, with clouds, or rain, or snow, or anything natural. In this case the dust was created by a huge drill chewing into bedrock, and producing a virtual blizzard. Just the thing to mix with the angled sun rays.

In this case, adequate for the job. But, not ideal, The Canon G7 doesn’t shoot raw, and therefore only 8 bit JPGs. The JPG part wasn’t that big an issue in this case, but the 8 bit file was found to be a real problem when I tried to enhance the separation between the rays of light and the shadows. It kept posterizing. (If anyone tells you that in-camera jpgs are sufficient, tell them to go to the back of the class. That’s where they’ll find the Canon marketing and engineering people who decided that this fine camera didn’t need raw).

The lens’ reach was fine though. If I’d been using something like the Leica M8 I couldn’t have gotten the shot, because the longest lens that I own for it is a 50mm (70mm equiv). So anyone that says thatit’s the photographer, not the equipment– send them out to stand in the middle of the four lane highway to get the shot with a shorter lens. Me, I’ll sit in the car and shoot though the open window with a long lens, thank you.

Yes, of course there’s always the photographer (except on the Mars Rover). No need to belabor the point. But without the photographer’s eye, sensibility, preparedness, and image processing talents (such as they are), the shot would not have existed.

As we see, it is more than the camera. It’s the photographer – true. But it’s also all of the other ingredientsincludingthe camera. The wrong gear would not have allowed this shot to be taken. Therightgear would likely have produced a better image. But as it was, what was used was adequate, and the shot one that the photographer, at least, is satisfied with. But the light, the subject, and the atmospherics were also all needed.

So, the next time someone hauls out that old cliche thatIt’s Not The Camera, It’s the Photographer, whack them upside the head and tell them to stop being such a simplistic dolt.

This page contains photographs by Frank Forward that were takenduring aLuminous Landscape Workshopin Iceland in July of 2004.Photographs by other workshop members can be seenhere.