When I was in my late teens in the mid-60’s, I bought the first production camera with a behind-the-lens metering system, thePentax Spotmatic. Prior to that time everyone used hand-held meters.

Today, except for photographers using large format equipment or those doing extensive studio flash work, hand-held meters are almost a thing of the past. This is a pity because if nothing else photographers who reply on built-in meters are missing the advantages of using an incident meter.

For anyone unfamiliar with incident light metering techniquea short tutorialis found further down this page.

It isn’t often that a product achieves a perfect "10". TheSekonic L508is as close to a 10 as I’ve ever seen. I find it almost impossible to find fault with this product. And, while there are a number of fine hand-held light meters on the market, the L508 offers so much and is so brilliantly designed that it’s hard to look beyond it for an alternative.

This is a true 1 degree reflective spot meter. The angle of view can also be widened continuously to 4 degrees, adding to the versatility.

The flip of a lever changes the L508 to an incident meter. If you are not familiar with the advantages of incident metering you might find it informative to read thetutorialfound elsewhere on this page.

A unique capability of the L508 is a switch that lowers the incident hemisphere into a protective surround. Not only does this offer travel protection to the large surface of the ball but in this position eliminates the need for a separate flat incident diffuser. When positioned this way it can be used for directional measurements and comparison of shadow and highlight areas for determination lighting ratio. It also can be used for measurement of flat surfaces when doing copy work.

The L508 has two flash metering modes; wired and wireless. You can flash-meter in either spot reflective or incident modes and take cumulative measurements of up to 9 flash readings.

A thoughtful touch for studio users is that the unit auto-resets in flash mode, alleviating the need to constantly walk over to the meter whenever a new reading is taken. 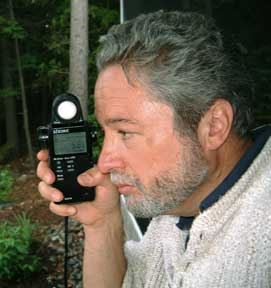 Using the L508 as a 1 degree reflective spotmeter

The meter has a very large LCD display that auto-illuminates when the light level drops below a certain point. This is a much appreciated feature when working in the darkness of a pre-dawn morning, trying to meter the sky before sunrise.

This display features prominent digital f/stop and shutter speeds as well as an analog f/stop scale reading from f/1 to f/128. Shutter speeds are displayed digitally from 30 minutes(!) to an 1/8000 second. For cinematographers there are frame speeds from 2 to 360 fps.

The meter is able to memorize up to 3 separate exposure readings. Each is displayed as a marker against the analog scale, making comparisons between highlight and shadow areas, for example, very easy to visualize. There is anaveragebutton which displays the average of 2 or 3 readings. Very well thought-out.

Film speed can be set from ISO 3 to 8000 and the speed set is displayed at all times. A very useful additional capability is a button markedISO 2which allows you to set a second film speed. Take a reading and then press this button if you are using Polaroid tests or will be using a polarizer or other filter for a particular shot. The LCD display shows the adjusted reading for as long as the button is held down.

Wonder of wonders, the L508 uses an everyday standard AA battery. They seem to last forever and replacements are available anywhere on Earth.

While not exactly waterproof, the L508 is described as havingrugged, sealed, all-weather construction. This is not a delicate studio instrument but a tool to be used in the field. No babying necessary.

The meter has a low light sensitivity of EV -2, better than any of the meters built into the cameras that I own.

Most of my cameras have built-in behind-the-lens metering systems. They are highly accurate, reliable and versatile. I wouldn’t want to do without them. But several of my camera systems, including theFuji 617,HasselbladArcBodyandNoblex 150UXrequire a separate handheld meter. Over the years I’ve owned several but none has been as powerful a light measuring tool as the Sekonic L508.

If you need a separate handheld meter, spotmeter, flashmeter, or would like to explore the advantages of incident metering (see the tutorial below), I can recommend the Sekonic L508 most highly.

A Tutorial on Incident Metering

The advent of through-the-lens (TTL) metering on most 35mm and medium format cameras has lead to a sharp decline in the ownership of handheld meters. Consequently there is an entire generation of photographers for whom incident light meters are unfamiliar. This tutorial is intended to explain what an incident light meter is and why you would want to use one.

The meters that are built into almost all cameras today are reflective meters. This means that they are measuring the light being reflected off the subject. This is a convenient way to determine proper exposure but is fraught with problems.

Meters are designed to provide a proper exposure for a subject that reflects a gray tonality with a reflectivity of 18%. Few things in this world, by themselves, meet this criteria other than possibly a Kodak 18% gray card 🙂

Fortunately, most of time the mixture of objects in a scene; grass, sky, trees, rocks and so forth, when averaged together usually are pretty close to an 18% gray. But, because much of the time the things that we photograph are not so conveniently neutral in tonality manufacturers of TTL metering systems on cameras have had to go to great lengths to design multi-zone patterns and sophisticated software algorithms to enable their metering systems to provide pleasing and accurate exposures.

Of Black Cats and Snow Storms

The classic examples of how reflective meters can be lead astray are the examples of a black cat in a coal mine or a white cat in a snow storm. In both cases if you were to trustingly use even the most sophisticated multi-zone matrix metering system you would end up with very badly underexposed and overexposed negatives or transparencies. The reason, of course, is that the meter sees the black cat and coal, or the white cat and snow as being 18% gray. Even the smartest computer algorithms can’t (yet) understand what the subject is, and since there is nothing else in the scene they will provide "correct" but inappropriate exposures.

The smart photographer, knowing this, will compensate by dialing in some exposure compensation. In fact, because most amateurs use colour negative film with its wide exposure latitude even this is seldom necessary and no one is the wiser.

But, the pro and the serious fine-art photographer typically shoots colour transparency material which has a much more limited exposure latitude. If your exposure is more than a half-stop off, particularly in terms of overexposure, you’ve forfeited the shot.

Incident to The Rescue 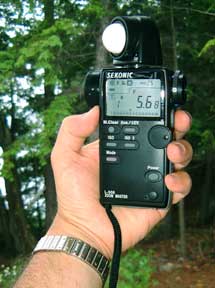 Using the L508 as an incident meter

An meter capable of taking incident light readings (like the Sekonic L508 reviewed above) features what looks like a half of a golf-ball-sized hemisphere, usually on a swiveling support. To take an exposure reading instead of pointing the meteratthe subject, as one does with in-camera and reflected meters, you instead place the meterinthe same light as the subject.

The hemisphere, orlumisphereas some call it, is designed as an 18% gray object and thus provides a reading equivalent to that which you would get if you took a reflected reading off a theoretically perfectly integrated scene, or a Kodak 18% gray card.

The beauty of the incident metering approach is that you needn’t carry a large gray card around with you on location, and you don’t have to worry that your subject matter — whether because of its colour or reflectance characteristics, will give an erroneous reading.

The other advantage of an incident meter is the ability to conveniently measure the evenness of lighting, particularly when doing copy work. Either with a flat diffuser in place of the lumisphere, or with a retracting ball design the way the L508 does it, you’re able to move the meter around the area to be photographed, measuring the difference in light levels, irregardless of the colour or reflectivity of the subject matter.

Do I need one?

If all of your cameras have behind-the-lens metering, probably not. But, if you have a camera that lacks built-in metering, such as some medium format and almost all large format systems, then you’re going to have to have a separate handheld meter. Then, a meter such as the Sekonic L508 which offers both reflective and incident metering will provide you the greatest versatility.

After a while you may even find that you use it in preference to your camera’s built-in meter.

As someone who purchasedone and then turned around and sold it on eBay, I have to say my opinion of the L508 meter is not so glowing. The one huge problem I have with it is that you can’t see the readout in the viewfinder when you are using it as a spot meter. This means you have to constantly take readings and then take the meter away from your eye to read the meter which I found very awkward compared to the Pentax Digital Spotmeter where you can just click away on different elements of a scene and get a very quick feel for the relative tonalities of each part of the image.

What I don’t like about the Pentax is that the readout is in whole stops (actually EV). Admittedly, it’s nice to have the ambient light reading mode of the L-508 (I don’t do much flash photography), but you can always spot meter a gray card. My latest meter, after the Pentax was stolen is a Minolta Spotmeter F which has in-finder readout to 0.1 EV, but it’s a little bulkier and heavier than the Pentax. The one other annoyance with the Minolta is that I have an aperturepriority camera and the meter is shutter priority only.

Just my 2 cents worth.

Jonathan Sachs is a contributor to this site and is president ofDigital Light & Color ‚ a software development company he founded in 1993. Mr. Sachs was previously cofounder of Lotus Development Corporation. His comparison of Fuji Velvia Vs. Provia 100F can be foundhere.

Sekonicrecently introduced theL-608 Super Zoom Master. It is similar to theL-508 IIthough it adds two major new features‚ an electro illuminescent display in the viewfinder showing both shutter speeds and F stops, and a radio controlled remote triggering capability. The viewfinder display addresses Jonathan’s objection to the 508, as detailed immediately above.

If you don’t already own a 508 and are in the market for possibly the finest meter available, the 608 looks like the one to buy.

There is a venerable name in the history of photography –Voigtlander. That Austrian camera and lens maker is long gone, but the name has been