The greatest enemy of image sharpness is vibration. One of the best ways of beating vibration is through the use of mirror lock-up (MLU). But, there are a range of tools and techniques involved in achieving the sharpest possible images, and we’ll look at each of them in detail.

Let’s look at the things that happen when you take a photograph with an SLR;

— the mirror flips up

— the aperture closes to the predetermined F stop

— the shutter opens for the pre-determined amount of time

— the film or sensor is exposed to light

— the aperture returns to wide-open for viewing

— the mirror returns to the viewing position

The items above that are in red happenbeforethe film or sensor is exposed, and therefore can each contribute to image unsharpness. The items in green happenafterthe exposure takes place and therefore have no effect on image sharpness (unless shots are being taken in rapid succession).

Of the three things that happen within the camera prior to exposure the mirror flipping upwards is potentially the most harmful to image sharpness.

Here’s a small test that you can do. Set your camera on a firm support, such as a tripod, and then place a small glass of water on the hot-shoe (balance it carefully). Set the exposure time to about 1 second, and once the water is very still press the shutter release.

What you’ll likely see are ripples on the surface of the water. This may be caused by your touching the camera to press the shutter and / or the mirror flipping upwards. If you know how to set mirror lock-up on your camera body, do so, and then do the experiment again, but also instead of pressing the shutter release manually, use a remote release, cable release or the camera’s self timer. See any difference in the ripples?

Here’s the point — any vibration that takes place just prior to or during the exposure will degrade the image. What’s the point of having super-sharp lenses and then blurring the image though lack of proper shooting technique?

It’s all Done with Mirrors 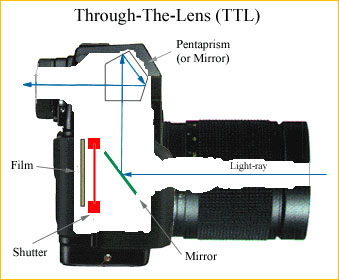 Before looking at why mirror lock-up is a valuable technique for maximizing sharpness, let’s be sure we understand what the mirror is and what it does. With an SLR (SingleLensReflex), whether film-based or digital, you are viewing the scene directly through the shooting lens. The two components that make this possible are apentaprismand amirror, as seen inFigure 1above. The mirror is located behind the lens, and just in front of the shutter. It is hinged at the top, and when the shutter is released it flips up out of the way just long enough for the shutter to make the exposure, and then it returns to the viewing position.

Manufacturers go to great lengths to reduce mirror vibration, because they know that it can have a profound effect on image sharpness. This includes the use of foam strips at a minimum, and dampers and shock absorbing pistons in more expensive models. And, as you might imagine, the larger the mirror the greater the opportunity for vibration, which means that medium format SLRs suffer more than 35mm models.

But in almost every camera that I’ve ever seen, sharpness can be improved by locking up the mirror prior to taking the exposure. What this means is that by pressing a button, (or regrettable in some cases a sequence of buttons), the mirror is locked in the "up" position before the exposure is taken. You decide how long to wait between when it is raised and when the shutter is released. 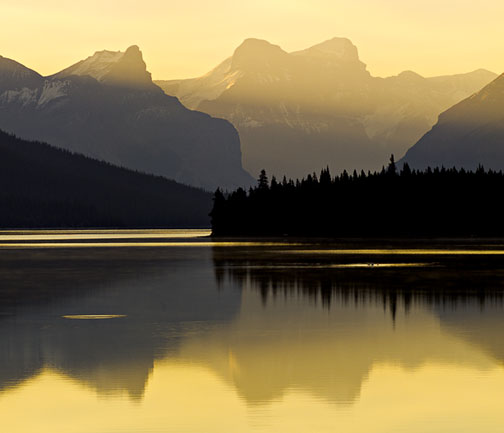 Of course this all begs the question, when and under what situations should one use mirror lock-up? Obviously not all photographs can be taken this way. Any photograph that involves taking the shot at a precise moment, where actually viewing through the viewfinder is critical, doesn’t lend itself to this technique. Also, there are no hard and fast rules. But generally speaking the longer the exposure time and the longer the lens used the greater the risk of image-blurring vibration, and the more one should use mirror lock-up.

In fact, the way I work is that I start with the following best-case scenario, and then work my way downward as dictated by the particular situation;

— mirror lock-up or self timer

I would say that some 80% off all the landscape and nature photographs that I’ve ever taken are done this way. If I’m hiking I will take a smaller and lighter tripod. If the subject requires constant viewing (such as wildlife) I’ll forego mirror lock up but will try and use anImage Stabilizedlens instead.

Other Tools and Techniques

The use of a tripod is the biggest contributor to sharp images, and it always amazes me how often photographers get lazy and don’t bother. "Oh, the light is pretty bright right now. I don’t need one. They’re too heavy. I like to work more freely. They slow me down." I’ve heard all the excuses. Makes no difference to me, but why bother owning great lenses if you won’t use proper technique? Sure, if I’m using a wide lens in bright light and the action is happening quickly I’ll hand-hold. But if possible I’ll even use a tripod in those situations.

If you did the glass-of-water test above you may have noticed how much vibration is caused by even justtouchingthe camera, especially when using long lenses. For this reason the use of a remote release is always a good idea. Modern electronic cameras have electric remote releases, while older mechanical cameras will take a simple mechanical cable release. Whichever type your camera uses, buy one. Use it.

An alternative is to use the camera’s self-timer. In addition to the usual 10 second self-timer many cameras have a 2 second setting. This, combined with MLU is a great way to reduce camera-induced vibration. TheContax 645, for example, does the job the way it should be done. If the 2 second self timer is used the mirror locks up when the release is first pressed and then the shutter is released after 2 seconds. Why more manufacturers don’t design their cameras this way is a mystery.

For quite a few years owners of thePentax 645were concerned that their cameras did not have mirror lock-up, while competitive cameras did. Pentax’s position was that they had such a sophisticated mirror system that no vibration was produced. Many owners weren’t satisfied with this explanation, myself included.

Then, in 2001 when Pentax released their latest incarnation of the 645 model, the645NII, they included mirror lock-up capability for the first time. Naturally I was interested in seeing whether or not Pentax’s claims were correct. Surprisingly they were, and you canread about it here. Be aware though that just because Pentax’s claim proved to be correct, don’t assume that other manufacturer’s similar representations are accurate as well. These things need to be independently verified.

ThePentax 67has been one of the most highly regarded 6X7 medium format cameras for more than 30 years. But it suffered terribly from mirror vibration, and early models without MLU are not very highly regarded. But, because the camera has such a large focal plane shutter the shutter itself opening and closing can cause image deteriorating vibration. Only the use of a very heavy-duty tripod and head can lick this problem, especially when long lenses and slow shutter speeds are used.

In fact shutter vibration in medium format cameras is one of the reasons that some pros prefer cameras with between the lens shutters. These have much lower vibration than do focal plane shutters, but present other advantages and disadvantages — beyond the scope of this article, unfortunately. 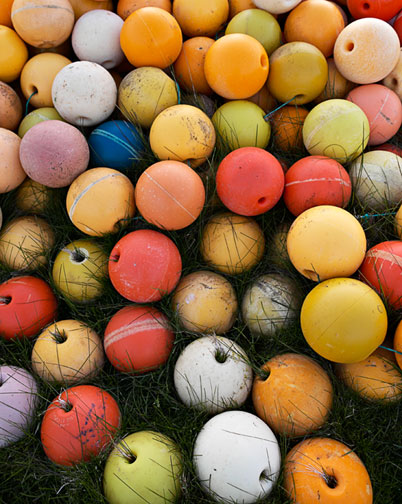 Almost all currentCanoncameras, both film-based and digital, have mirror lock-up. Unfortunately accessing it is a nuisance. On theCanon 1ds, for example, it takes a minimum of 4 button presses to activate, because it is located as part of aCustom Function, accessible only via a series of menus. Other cameras, such as theContax 645have a good old-fashioned MLU button. Press it and the mirror goes up. What could be simpler?

But, then there are cameras that don’t even have MLU. Quite a number of recentNikonmodels no longer have it. Like Pentax in years past, Nikon takes the position that it isn’t necessary. I’ve read enough independent tests relating to this issue (including in one of the major photo magazines a few years ago), that this appears to be incorrect. Personally, I would stay clear of any camera that didn’t have MLU. High quality images are tough enough to make. Why tie one hand behind your back?

Update:It is my understanding that among current Nikon cameras only the film-basedNikon F5has true MLU. The digitalD1handD1xalso have it available, viaCustom Setting #5. TheD100hasCustom Function 24, which is not really MLU, but causes the the mirror to flip up half a second before the frame is taken.

A closing thought; there have been some cameras in the past that solved the mirror vibration and image black-out problem. Canon has had three models over the years that use a so-calledpelliclemirror. This is essentially a semi-transparent mirror that is fixed in position and that passes part of the light to the pentaprism and part through to the shutter. This provides continuous viewing, higher frame rates and complete freedom from mirror-induced vibration. The last model that featured such a mirror is theCanon 1N RS.

Digicams are another partial solution. They forego mirrors and pentaprisms altogether and rather uses a live imaging chip that transmits the image to be recorded to a video screen in the view finder. Currently (Fall, 2003), there isn’t a single one of these that even comes close to the sharpness and clarity of a "real" image, but I imagine that as time passes this will change and some form of real-time electronic viewfinder will equal a pentaprisms and mirror combination. In the meantime, mirror lock-up combined with a solid tripod is one of the best ways to improve the quality of your photographs. 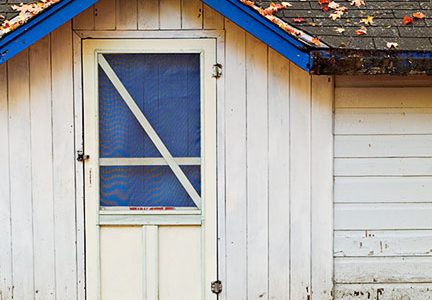 In mid-October, 2004, my friend Kevin Raber and I were on a two-day shoot together in and near Algonquin Park in North-Central Ontario, Canada. It

This page contains images taken during myJanuary, 2009 Antarctic Photographic Expedition. New photographs along with relevant commentary will be posted here on an on-going basis