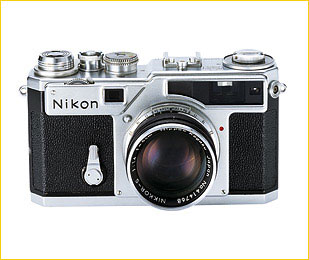 In November, 1957, a half century ago, I was 13 years old and just beginning my involvement with photography. In that year Nikon introduced theNikon SP, a now legendary rangefinder camera. It was expensive, (about $2,500 with 50mm f/1.4 Nikkor, in today’s dollars – ($415 then)) and aimed at the professional photographer. Only some 22,000 cameras of this model were ever made between 1957 and 1965. The SP was designed to compete with and indeed surpass theLeica M3, the first of the "M" series, which had been released in 1954, and which still continues today with the latestM8digital.

The Nikon SP turned out to be that company’s ultimate rangefinder camera, and when the original Nikon F SLR came out just two years after the SP’s introduction, rangefinder cameras started a rapid decline in popularity. Though less expensive and lower speced Nikon S3 and S4 rangefinder models were subsequently made, they too eventually went out of production. With the exception of the Leica M series dynasty, rangefinders lost popularity among both professional and amateur photographers.

But for many, myself included, the Nikon SP was the holy grail – the ultimate rangefinder Nikon, and some have even saidthe ultimate Nikon. Though I was too poor to afford one even as I began my career as a photojournalist in the mid-1960’s while new SPs were still in production, the Nikon SP was my idea of the perfect camera, what Stephen Gandy has called thequintessential photojournalists camera.

I’m not a camera collector. I’m a camera user. When one stops being appropriate for my needs I move on. But though I never owned an SP until recently, I harboured an ongoing lust for one. Over the years I would very occasionally see one in used camera stores, but they were always beaters. Though they were fun to pick one and fondle in the store, none seemed worth the investment, particularly since they were all well worn, yet expensive.

Then, in late 2006, on a whim, I dropped onto eBay and did a search on Nikon SP. To my amazement I saw one that had its condition described as being 9.5, and though expensive, it wasn’t outrageous. I couldn’t resist. Fifty years of pent-up desire needed to be fulfilled, so I bought it. (The price was less, in 2006 dollars, than when the SP was first introduced).

I’ve been lucky over the years buying gear on eBay, and this time proved no different. The camera turned out to be about an 8.5, but it was mechanically perfect and really in excellent shape for a camera that was some 50 years old.

If you weren’t involved in photography beginning in the 1960’s or earlier, or if you aren’t a Nikon aficionado or a rangefinder camera enthusiast, you are probably asking yourself –What’s the big deal? The big deal is that the Nikon SP is the progenitor of just about every modern Nikon camera. The original Nikon F SLR, which beginning in 1959 helped establish Nikon’s reputation astheprofessional 35mm camera for a generation of working photographers, has much of its shutter mechanism and basic design grounded in that of the SP. Add a mirror box and pentaprism to the SP and you pretty much have a Nikon F.

But in 1957 SLRs were not king of the hill (yet). Rangefinder cameras were the dominant 35mm format and the top banana was the Leica M3. Build quality, variable frame-line viewfinder, and lens quality were what differentiated the M3, and this was Nikon’s target. By the late 1950’s Japan was well on the way toward rebuilding after the Second World War, and with a renewed industrial base and sense of pride in its craftsmanship Nikon was determined with the SP to not just meet the Leica M3 in terms of build quality and features, but to surpass it.

One can argue over whether or not Nikon succeeded in its task, and many still do. Be it enough though to say that to hold and shoot with an SP today is to be placed in a time warp back to when cameras were precision mechanical devices, with clockwork gear trains, solid brass castings and a look and feel that today is only found in the finest swiss watches. Our currentwunderplasticDSLRs are in many ways much better picture taking machines, but few if any have a mechanicalrightnessthat causes goosebumps among those that appreciate craftsmanship, the way the Nikon SP still does.

Even Nikon itself recently gave in to the appeal of the SP’s allure. In 2005 the company produceda limited edition reproduction of the SP. Just 2500 pieces were built and they were immediately snapped up by collectors in the Japanese domestic market though a lottery system. You can expect to pay somewhere north of $7,500 for one now, if you can even find one available.

The Nikon SP was that company’s ultimate rangefinder camera. Even today, a half century later, the latest film-based Leica rangefinders offers little that is markedly superior to what the SP had to offer. Of course there’s TTL metering, but a Nikon SPx with TTL metering was already on Nikon’s drawing boards by the late ’50’s. It was only the unanticipated steamroller success of the SLR, specifically the Nikon F, that lead Nikon to back away from further enhancing their rangefinder line and to concentrate manufacture on the F and its successors instead. It would be interesting to conjecture what would have happened to Leica if Nikon had decided to continue its rangefinder camera development.

As it was the complexity of the SP’s viewfinder system turned out not to lend itself to high volume manufacturing, and it was followed by the simpler and less expensive and easier to produce S3, and S4. By 1964 Nikon discontinued production of all rangefinder cameras. Its low volume production, and state-of-the-art features and build quality are what makes the Nikon SP such a collectable today.

Do I shoot with it? Yes, occasionally, when I’m in a nostalgic mood. But that’s not the point of the SP today. It serves for me as a reminder of my earliest days in photography, and a time when cameras were finely machined precisions instruments, without a battery in sight.

By: Sean Reid Leica Digilux 2 @ ISO 200, converted from RAW As I see it, an exceptional camera needs to be successful both in terms

FacebookTweet Sony: Beyond question, the mirrorless market leader as of July, 2019, Sony also manufactures image sensors for most of their competitors. Sony has been