Landscape, nature and wildlife photography is by its nature a solitary sport. While I often travel with one or two other photographers, or even larger groups when leading a workshop, my best work and most exciting times are when I go shooting alone. Since working alone in the back country, wherever it may be, has potential pitfalls and even actual dangers, here are some things to consider when making your preparations and when in the field. 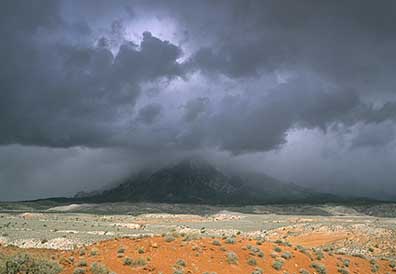 Water‚ When shooting in the desert Southwest or mountainous regions it’s all too easy to dehydrate. One should drink at least a gallon of water a day. I usually buy a carton of 1 liter bottles since they’re easy to carry when hiking and I always make sure that there is at least a day’s supply in the vehicle in case of a breakdown.

Food‚ Remote locations by definition don’t offer much in the way of access to food, so I’m always careful to have at least a day’s worth of foodstuffs in the car. Healthy snack foods like nuts and raisins along with apples and bananas are my staples, though a pound of cheese and some bread is handy after a sunset shoot that has a long drive back to a motel. It’s amazing how small towns tend to shut down early, especially in the off-season. I’ve frequently been glad to have such supplies when I’ve discovered the local (and only) diner has closed for the night.

First Aid Kit‚ Needless to say this is agood idea. What more needs to be said?

Cell Phone‚ It’s remarkable, but especially in the Southwest there are quite remote locations that do have cell phone service. I once was at a remote part of Canyonlands National Park, maybe 30+ miles along a back road from the nearest town or highway, and I noticed that my phone on the seat beside me had 2 bars of signal strength. I called my wife to say hi. Was she surprised. More importantly, having a mobile phone with you can be the difference between an inconvenience, and a serious problem if you have a breakdown.

Let Someone Know Where You Are‚ In addition to checking in with my wife daily by phone, I make sure she knows where I’m supposed to be staying each night. That way if I don’t show up someone’s going to know about it.

Appropriate Clothing‚ Regardless of where you are shooting, be aware of the possibility of dramatic weather conditions. It can snow in the summer in the mountains. I always make sure that I have sturdy boots, a rain jacket, gloves and an extra sweater, regardless of the season or the location.

Two-Way Radios‚ In the past few years decent short range radios have become better and less expensive. Units like the MotorolaTalkAboutmodels are very handy for staying in touch with someone that you’re shooting with, especially when you’ve wondered away somewhere. These have a range of a hundred yards or so over rough terrain, and up to a mile over flat ground or water. They are also handy for keeping in touch between vehicles when caravanning.

Miscellaneous‚ My kit always contains a flashlight, extra batteries, matches, and a multi-tool like aLeatherman,or a decent knife.

Whether through stupidity, or simply good fortune thus far, I have rarely been scared when working on location. One exception was in the Fall of 2000 when I was living and shooting for several months in Northern Georgia and theGreat Smokey National Parkarea.

I was revisitingBrasstown Bald, a mountaintop with spectacular panoramic views of the surrounding countryside. I stayed the evening before in a nearby town and when I awoke well before dawn a look out the motel window showed that a fog had settled in overnight. Figuring that this could produce some potentially great images of fog-shrouded valleys I headed to the mountain.

The problem was that the mini-bus that takes tourists to the peak doesn’t operate until well after sunrise, and the hike up, through a narrow wooded path, is steep and quite strenuous. So, rather than my full 35lbRolleibackpack I decided to take the much lighterHasselblad XPan, its 3 lenses and myGitzocarbon fiber tripod.

That decision made I still sat in the car, hesitating. On a previous visit I had seen a bear cub not far from the parking lot where I now sat, and in a chat with a local Ranger had been told that there were several bears living in the area that year.

During the day, with cars, tourists and mini-busses about I wasn’t terribly concerned about bears. But at 5am, in the pitch dark, with more than an hour to go till first light, one would have to be a fool not to be apprehensive. Nevertheless, taking my flashlight and a thermos of coffee I’d bought at an all-night truck stop, I started up the trail.

About half way up I heard a loud sound in the woods to one side of the trail. I froze, and waited silently. I heard it again. Sounded like footsteps. Large ones. I must admit, I panicked. I literally ran the next several hundred yards, uphill, to what I regarded as the relative safety of the observation platform. (Stupid, I know, but in a panic one doesn’t always do the right thing). Arriving there totally exhausted it took at least 20 minutes for my heart to stop racing and to catch my breath. Luckily, either there was no bear, or he decided that some berries were more attractive fodder than a middle-aged photographer.

The photograph above and othershereshow the results obtained. 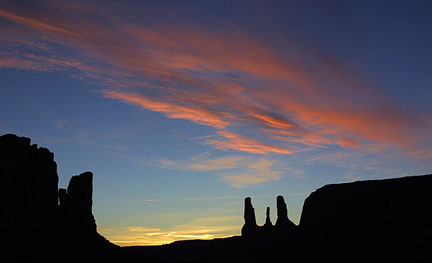 I find being alone and doing photography in a remote location both challenging and rewarding. Without the distraction of others I have the ability to hear myself think. I also can take as much time exploring and working a location as I like, without having to consider the needs or feelings of someone else.

Is it lonely? Strangely not‚ during the day. I usually find that I’m too busy, having too much fun, and too involved in either scouting locations or setting up a shot to even think about it. But, dinner time and the evenings certainly can be lonely in a rural small town motel or campsite.  But, the consolation is that one has to go to bed early to be able to be on location for first light at the end of a long pre-dawn drive. Believe me, it’s a trip.

(For some additional thoughts on shooting alone my essay from 2000 titledOn Photographymight be of interest).

Workshops & ToursIf the idea of shooting in remote yet exciting locales appeals to you, but you find the idea of organizing such a trip somewhat daunting, then a workshop may be just what you’re looking for. While some provide instruction for beginners, or specialized techniques for more advanced workers, many are simply provided to bring you to great locations by someone who knows it well. You can search out workshops on the Net. The ads in the back ofOutdoor Photographymagazine are also helpful. I run at least two field workshops each year, though regrettablymy workshopsusually sell out within hours of announcement and as much as 6 months in advance. Another possibility, if you don’t need a workshop (or the time commitment or expense), but would like someone to help you find the best spots at the best times, is to secure a photographic guide. If you’re considering a trip to the American Southwest I can recommendSteve Kossack, a photographer who specializes in such private 1-on-1 photographic tours.