Oscar Petersonis a world-renowned jazz pianist. His name and his music are known around the world. He has been recognized as one of the jazz greats for the past half century. What is not well known is that he has been a passionate photographer since childhood, and still continues today to pursue his second art‚ photography.

I had long heard about his involvement with photography, and though we both have lived in Toronto for many years, we had never met until recently. Two things brought us together. Firstly, it turns out that we have had a common friend for the past quarter century‚ Brian George‚ a professional photographic equipment salesperson with whom we have both spent more money over the years than either of us would like to remember. And, it turns out that Oscar has been a fan of my web site for some time, and he recently became a subscriber toThe Video Journal. 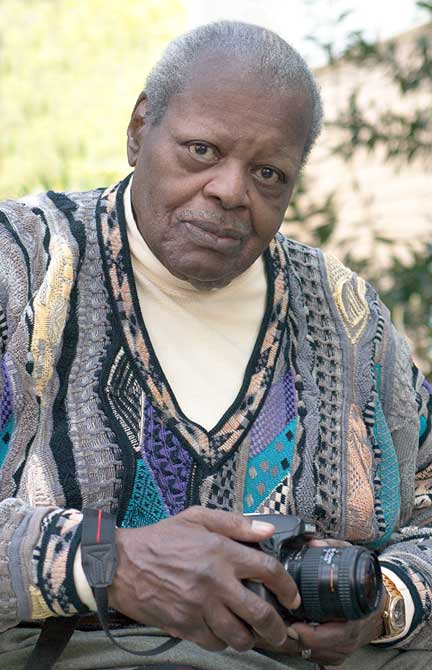 This all lead to Chris Sanderson (the Director of The Video Journal), Brian George and I spending several hours on a day in late October filming an interview with Oscar regarding his life in photography. This exclusive interview will appear inIssue #7ofThe Luminous Landscape Video Journal, scheduled for shipment to subscribers in February, 2003. Another reason tobecome a subscriber now, and if you are one already, ensuring that yourenewon time. Either way you don’t want to miss this unique conversation.

The Making of A Portrait

In addition to the filmed interview I had hoped to be able to photograph Oscar while we were together, though this wasn’t on the agenda. I had given some thought to what I wanted such a portrait to look like and had decided that it should show him as a man, not as a jazz icon. But, I also wanted it to say something about his involvement and interest in photography.

The mental image that I created had him holding a camera and looking into my lens. I wanted eye contact, and I wanted to see his hands on a camera rather than on a keyboard.

Once the interview was completed and we were sitting around having coffee, I asked if he would mind if I did a quick portrait of him. He was very gracious and agreed. I had brought my Canon D60 and 28-70mm f/2.8 lens along, and I began taking a few casual shots as we talked. Our friend Brain George had a camera with him as well, and I asked to borrow it as a prop and placed it in Oscar’s hands. A few minutes and several frames later this was the best frame from about a half dozen taken.

Though portraits are not one of my photographic specialties I feel that this one captures both Oscar’s warmth and humour, and it also fulfills my pre-visualization.

The room we had been filming in was a large glassed-in sunroom with transparent ceiling. This made the light somewhat "toppy". But otherwise, especially because it was a hazy Fall day, the indirect light, though low, had a lovely quality ideal for an informal portrait.

For portraits, a medium telephoto is often best for several reasons. Too wide a lens and perspective can be unflattering. Too long a lens and intimacy is lost and perspective flattened. This zoom was set visually to a focal length of 63mm, which due to the D60’s multiplication factor turned it into the equivalent of a 100mm lens. The shutter speed was 1/100 second, suitable for hand holding at this shutter speed, and the aperture was f/3.5, a bit down from wide-open.

Though I would have preferred slightly more depth of field, this proved to be adequate, as his face and intricate sweater are tack sharp. His hands are slightly out of focus, but this doesn’t bother me at all. In fact it causes the eye to move upward to the face because of the increased sharpness there.

Whereas if I had been shooting film I would have been loath to shoot in colour at ISO 400, the D60 produced an image that shows virtually no grain, even in a very large print. (This is essentially full-frame, as shot).

Other than some slight colour balancing and an appropriate amount of USM, I did use the clone tool to remove the corner of a chair in the upper left hand of the frame. No other manipulations of any sort have been done, or needed to be.