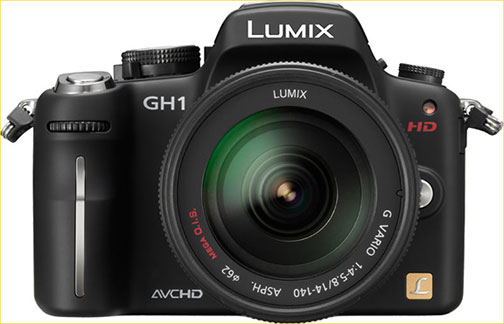 About a year ago, in July, 2009, Ireviewed the Panasonic GH1’s video capabilitieson these pages, and in the months since have used it as a favored stills camera on a number of trips and shoots, where its small size, high image quality, and versatility made it a pleasure to use. No, it doesn’t have the same IQ as a Leica M9, Sony A900, or other high resolution DSLR, but then again it’s a lot smaller, lighter, andit shoots video.

And that, dear friends, is what this brief article is about. If you’re reading this I needn’t remind you that there’s a revolution happening in video, with major TV shows and even feature films being shot in whole or in part with video-capable DSLRs, in particular the Canon 5D MKII, and more recently the Canon 7D. These are pretty lousy video cameras from an operational point of view, but their shallow depth of field, great low-light capability, and high video IQ have earned them a solid reputation among both amateur and professional film makers. An entire accessory and support industry has grown up around them.

So what about the Panasonic GH1? It caused quite a sensation when it came out, because frankly it appeared at the time that it would trump the 5D MKII at its own game. It had full manual control of exposure, a high quality electronic viewfinder, metering, zooming, silent auto-focus and also image stabilization during video, and therefore appeared to press all of the right buttons, so to speak. In 720P/60 mode image quality is excellent, though in 1080/P24, which is what most people want for indy video production, its really great –so long as neither the camera nor subject move. If there’s motion in the frame you get “mud“, which is the official ISO term for crappy footage.

As first explained inmy 2009 reviewthe reason for this is that Panasonic crippled the GH1 with a poor AVCHD codec that embeds its 24P footage in a 60i envelope (forcing users to use specialized software to unwrap it before transcoding), and a codec which does not properly utilize “B” frames, which assist in motion prediction. The bottom line is that Panasonic lost the race even before they hit the starting gate by not equipping the camera with a 1080P/24 codec that serious users would find acceptable. What a shame.

But a good product with poor features or capabilities can be salvaged by its users, as evidenced by numerous hacks that have appeared over the past few years for various cameras. In the case of the Panasonic GH1 the fixer (I hesitate to call him a hacker because of that word’s negative connotations) is a fellow calledTester 13. WhatTester 13has done is create a simple to use patching tool for the GH1’s firmware that allows for a high degree of customization, including most importantly, the ability to shoot native 1080/P24, without the 60i wrapper, and without mud! In other words, extreme clean, high quality and user-friendly true HD video.

How To Hack Your GH1

You need two pieces of software to update your GH1 with the hack. The first is the latest version of theGH1’s firmware – V1.32. This can be downloaded from the Panasonic web site. Even if you already have it on your GH1, you still need to download it again and have it on your computer.

The other software needed isPtool, the latest version of which is available here. This is the program written byTester 13which hacks the firmware so that it can do some magic things that Panasonic’s engineers couldn’t or wouldn’t make it do in the first place.Here is a good place to start reading.

This is a Windows .exe file. If you’re a Windows user you just run it and point the program at the V1.32 firmware file on your drive that you’ve already downloaded. If you’re a Mac user you need to use Bootcamp, Parallels, or the freeWinebottlerfor running Windows apps on your Mac. 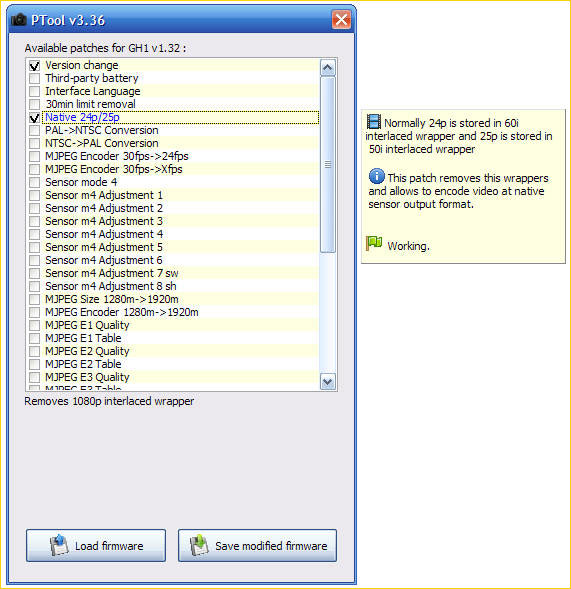 As you can see from the illustration above, there are two buttons at the bottom –Load FirmwareandSave Modified Firmware. Load the current version of the GH1’s firmware (V1.32) and then choose the settings that you want to change. Each of them has a brief description that appears when you select it. (More on this in a moment).

When done, click onSave Modified Firmware. An important thing to note is that the Version number that you enter must be at least one decimal increment higher than the current version installed on your camera. So if you’re doing this for the first time you need to save asGH1___133.bin. The second time (if you wish to experiment) GH1___134.bin. Got it?

Please also note that the file name has two underscores, not one.

Next, copy this file to the root directory of an SD card. Then, place the card into your camera, turn it on, and press PLAY. If you’ve got a full battery and the file is named correctly you’ll then find that the camera updates the firmware.

In addition to allowing the GH1 to produce very high quality native 24P video the hack is capable of a number of other changes, including allowing the use of third party batteries, switching from PAL to NTSC and visa versa, and removing the European 30 minute / shot limitation.

This is all very much an ongoing process. It started in April, 2010 andTester 13is hard at work updating and enhancing his firmware hack. Updates, discussion and advise are available atDVXUser, a video community site with a strong GH1 following.

There are a number of threads available, and things are somewhat chaotic and in constant flux, buthere is the place to start.

UPDATE:Even in the few days between writing this and publishing it there has been a huge amount of development taking place, along with new discussion threads, features and settings to test. Be aware that this is all in a constant state of flux and so if it interest you, stay plug-in to the discussions that are taking place on DVXUser.

Update #2: There is now the beginning of aUser Manualonline.

A Word to Panasonic

As if mid-June, 2010 Panasonic has been silent on this hack, though certainly they are well aware of it. I would urge Panasonic to embrace this user community enhancement of their product by not doing anything to hinder or stifle it. Canon has done the right thing by recognizing the power of the Internet and the user community to propelling a product (the 5D MKII) to success, and Panasonic would be well advised to do the same.

A GH2 is undoubtedly somewhere on the horizon, and hopefully it will bring the product line to a new level of capability. Hopefully as well it will surpass what the GH1 can do when enhanced with theTester 13hack. But in the meantime Panasonic should welcome the enthusiasm that the user community is showing for their product when enhanced and improved by this firmware hack.

Tester 13and his associates make this hack available without charge, but they do ask for your support. If you installing the hack and are pleased with the results (as I’m sure you will be),a donation will surely be appreciated. At this time it can only be made via Paypal.

A Few Words of Caution!

Though I have encountered no problems with this GH1 video hack, and I have not heard of anyone else who has, it is always possible that you might cause a problem with your camera that can’t be fixed or which might void your warranty.

You should therefore read the online discussions and instructions carefully before proceeding, or, if you recognize that “life is risk” – just get on with it. You’ll probably be just fine.

Please be aware that as of cameras built in June, 2010 Panasonic has installed new firmware that is not suitable for this hack. You’d be better of buying the newGH2when it becomes available in early December.

"Rebel"noun : 14th century— one who rebels or participates in a rebellion —Rebel With A CauseTheCanon EOS Digital Rebelis Canon's latest marketing step toward domination