Street shooting, a form of documentary photography, is best done at times and places where people congregate. A parade is an ideal venue, and something like aSanta Clausparade is one of the best. Young and old congregating outdoors to have a good time together. What a great place to do people photography. 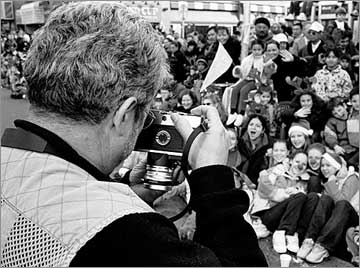 Photo of Michael shooting the crowd by David Harris

In November, 2001 photographerDavid Harrisand I, along withVideo Journaldirector / cameramanChris Sanderson,spent much of a Sunday afternoon photographing theToronto Santa Claus Parade. This annual event has been running for 93 years and is the largest parade in Canada. It attracts almost a million people.

Bring in The Clowns 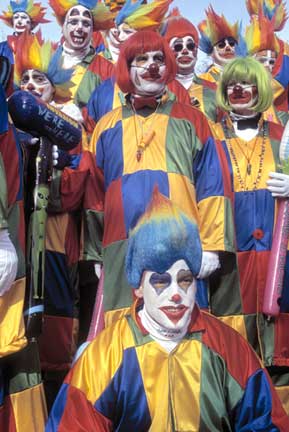 We arrived at the parade’s staging area about an hour before start time. There were hundreds of costumed clowns, marching bands and other participants milling about. Everyone was in a festive mood. It turned out that the official clown photographer (I’m not kidding) hadn’t shown up, so I got roped into doing some clown portraits and group shots for the parade organizers. Great fun.

Before the parade got underway we started walking down the parade route. There were three of us, with cameras in hand and over shoulders. Two of us wore shooting vest, which made us look somewhat "official". We simply looked like we were supposed to be there and knew what we were doing (sort of). During the two+ hours that we walked the parade route alongside the bands and floats no one ever questioned our right to be out there. The word for it ischutzpah. 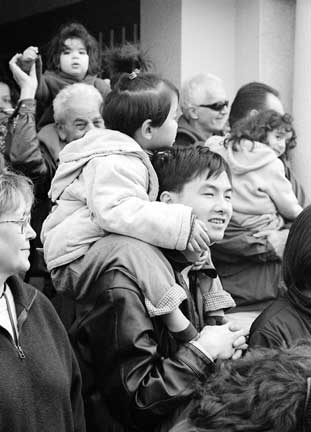 For me photography at a parade isn’t about the parade itself, though that can be enjoyable. Rather, it’s about the people who arewatchingthe parade. They’re the real show. Like at a country fairMidway, when people are in large groups in public places, and particularly where they’re having fun, they are generally unaware of having their photograph taken and relatively sanguine about it if they do notice.

The things to look for in photographing a parade, as with any other type of street photography, arecontrasts,juxtapositionsandirony. Yes, the floats are cute and the marches colourful, but the real interest is the people watching the parade. 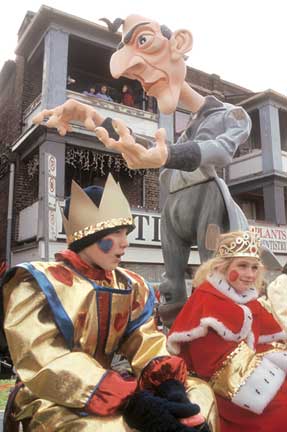 This photograph almost works, but I feel that it just misses because there isn’t any interaction between the king and queen. But I love the float figure behind them, and the people on the balcony complete the depth interest. 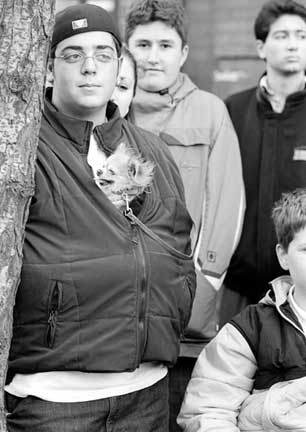 When I photograph people in crowds I’m always on the lookout for the eccentrics. This fellow knew I was there, but after a couple of frames he ignored me‚ though his slight smirk shows that he knew what was attracting my attention. I find the trick with this type of shooting is to keep at it. If the subject looks at you, keep shooting. Eventually they’ll look away and start to ignore you. The again, they might not. Either way it can lead to interesting photographs. 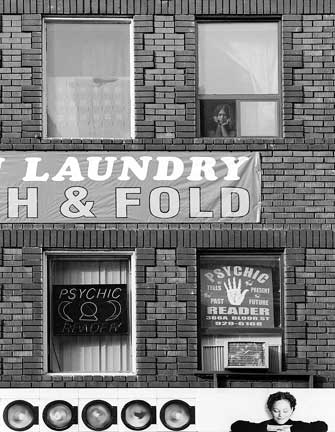 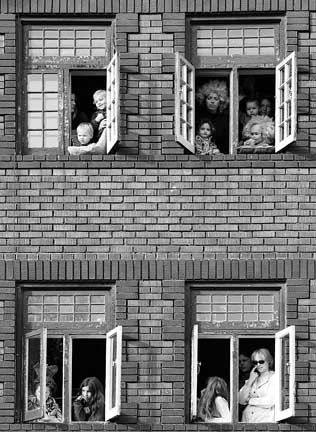 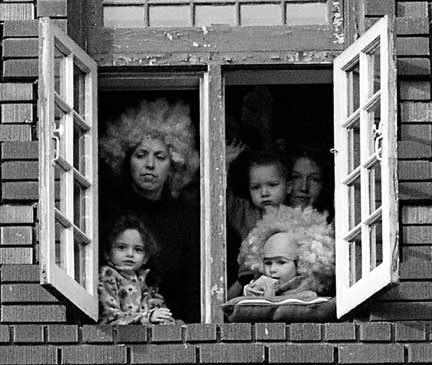 The enlarged window from the upper right is fun to examine closely. Clearly this family was having something of a costume party. Closely examine the remarkable detail. This is a chance to examine the superb image quality of theLeica Apo-Summicronlens, regarded by some as one of the highest resolution lenses currently available. It would have been a quite something if I had shot this with a sharper ISO 100 film, rather than the 400 speed film that was used.

The observant viewer will have noted that though these shots were taken from street level‚ looking upwards, there is no tilt to the buildings. A tutorial on how to correct this type of perspective distortion is foundhere. 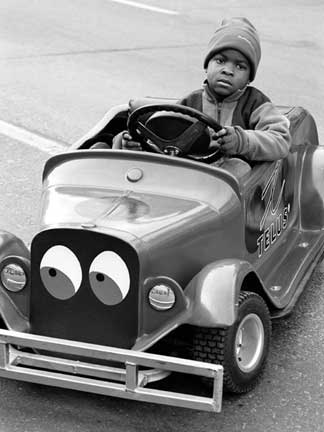 This little guy was one of several kids driving toy electric cars as part of the parade. He seemed pretty overwhelmed by the whole thing. I took several frames, but this one, where his eyes are so expressively in counterpoint to the car’s "eyes", was the most appealing of the set.