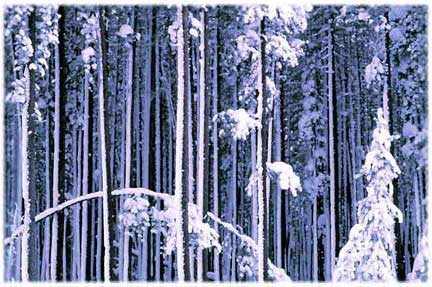 Perhaps some of you might be interested in the technique I use to give my images a painterly/illustration effect. I will be happy to scribble a few lines about my pixel blunderings, but if Michael will indulge me the space, continue to the end, where I will discuss Epiphany and other such Pretentious Musings.

All of my images begin as 35mm slides. I useNikonequipment, Fuji film (these days,Provia F), aGitzotripod, and since I was beginning to list permanently to starboard‚ a backpack, as distinguished from a shoulder bag. Along with five lenses, I carry anSB-24flash and theSC-17cord that allows it to function off the camera. I long ago gave up theQuantum Turbofor a package of 8 AAs. I do carry threeNikon F4bodies, one with aPolaroidback, the 81 series of filters, and three or four circular polarizers so I don’t have to be switching one from lens to lens‚ just as that cloud is about to obscure the sun for at least 30 minutes of Stygian gloom.

The four polarizers are a self-indulgent concession to my terminal impatience, and a recognition of the fact that the closer you can get to your output the more time youÃ‚ºll save. Which is money‚ if I’m on location for a client.

So, back to method: I usePhotoshop 6.0,Painter 6.0,Studio Artist 1.5, andPhotoGraphic Edges. But I found that the off-the-shelf image software was not giving me some of the effects that I was conjuring on my mental monitor. So I developed software so that I could create those effects. Now you know why, no matter how long or assiduously youÃ‚ºve played with all those software filters, there’s something not quite the same in my images‚ or, most probably, you hadnÃ‚ºt even noticed.

These days, as a business, I am most often shooting to create images that will sell as 30 x 40 IRIS prints. I scan the slides into myMac G4with aPolaroid 4000and create a 20-25MB file for an image I think will work as a print. In this size, I color correct, spot, clone, and do all thoseSilverFast(scanning software bundled with the Polaroid 4000) andPhotoshopthings to get the image to the jump point of the next stage. Which is sometimes hours and hours of filters, effects, edges, layers, opacities, and masks to crank those pixels around to where they do as I say. In the final step, I res it up to about 70MB withGenuine Fractals Print Pro.I love this software! I can see no difference between highly magnified portions of the same area in either file. 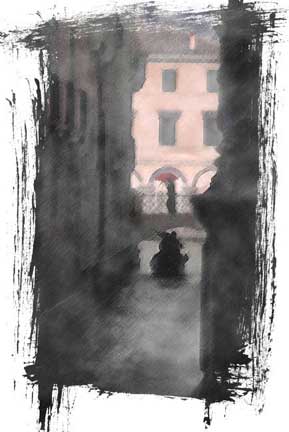 TheTravels with Redseries began in Venice, although I did not know at the time it was going to be a series. I saw the gondolier under the bridge, sheltering himself from a torrential downpour, and people dashing across the bridge in both directions. I liked the graphics of the bridge arch and the gondolier pressing his hand on the underside of it to keep from drifting into the rain.

But it lacked, so I waited to see what serendipity would provide. With a break in the clouds, the rain let up a bit, and a few shafts of light struck the pink building in the background. OK, the Photo Gods were trying, but nothing to write Zeus about‚ maybe their full attention was on a bathing suit shoot in the Caribbean. I continued my vigil, and unfortunately, as the rainÃ‚ºs intensity waxed and waned, the bridge path became very crowded. But this is the era of Photoshop. I waited for a more stately-moving individual to cross, and then later, excised the other shapes on the bridge. The woman was carrying a black umbrella. This looked a little too sepulchral with the rain, glowering sky, and the dark walls leading to the bridge. Enter Photoshop (again).

Of all the combinations I tried, I liked a red umbrella best. At this point, I started trying the various filters, software effects, layer blending modes, and sundry digital histrionics‚ several hours later to emerge withTravels with Red, Venice. The next time I needed a "something" with a spot of color was when I shotTravels with Red, Bridgein Central Park. 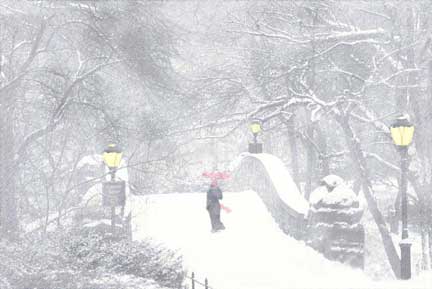 For a while I had imagined several shots that would make good images, if nature would consent to favor me with a good snowstorm. Shrouded city landmarks in the swirling unremitting white seemed to be a perfect background for a solitary figure. Nature cooperated, and arrived one of those rare storms in NYC when it snowed all night and through the morning. I live across fromManhattan,inNew Jersey, so I was up about 5am to catch a bus that would drop me off inTimes Square, about two miles south of the area inCentral Parkwhere I shot this.

Fortunately, my wife indulges all my manias and graciously consented to playRed. We arrived at the park just about sunrise, and had the park all to ourselves for about an hour. Thereafter and until well into the morning only a few hardy souls braved the stinging snowfall. After 11 am the snow became trampled beyond Photoshop’s repair. The bridge image was one of several I shot in the park. Two others were purchased byGraphique de Franceto be published as posters, and an article about my work to be published inPopular Photographyfeatures anotherTravels with Redimage I shot on that day. 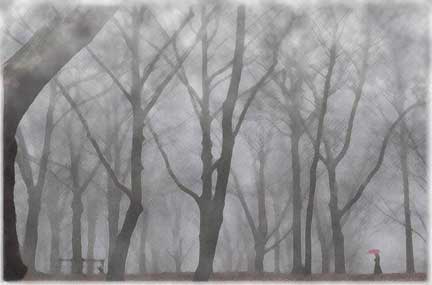 Zero Zerois an aviation term. It refers to flying conditions where the ceiling is zero (obscuring conditions all the way down to the ground) and the forward visibility is zero as well. Even without the jargon, the wraith like figures disappearing in and out of the mist made for an interesting day. The Nikon Deities (theyÃ‚ºre not as powerful as the Photo Gods) smiled on me. The winds stayed light and few people crossed my path in this small town in northern Germany.

My wife reprised her starring role asRed. As I had previously found, the images I like best are conceptually complete ‚ that is, they require little more that accents from Photoshop. In this image, I layered in additional fog in certain areas, used levels to change tones in the trees, and used minimal effects. This shot is mostly design. So yes, there is technique involved, but I find a more important component is restraint. ItÃ‚ºs more an understanding of when to control the awesome power of Photoshop.

Yes, yes, of course it’s possible to turn a step ladder into a hot pink airborne yak. So? It seems to me that just a few extra brush strokes, a little too much desaturation, a tad more in the levels dialog and on the effects meter, and the whole thing starts to go south. After a while, you learn which filters need to have their own layers whose opacity can be diminished and/or used with aBlend Modeto make it work. Keep cranking out those snapshots in theHistory Palettetoo, so you can backpedal without losing too many changes.

Sometimes I have to let the image be for a day or two, to get some perspective. After five or six hours on one image, my judgment is approaching Antarctica‚ that is, it’s gone way south.

I did not foresee aRedseries back then, nor was I searching for a theme. But often, I find the images I see in my mind, or that I find arresting, have a solitude, a stillness, even a shard of melancholy. A haunting quality, as in coming upon, as I once did, a child’s bike in the woods‚ rusted, chain hanging, its bent frame silent testament to a battle with a more massive force, and left propped against a hulking, rough-barked tree.

I see: how long ago was it new, and who left this item of once youthful pride and cheerful vitality against this tree, lone sentinel in the quiet clicking snowfall, and the intermittent sighing of the wind? I see the innocent exuberance that is youth, and I see its vestige. I see a poignancy, a parable of passing seasons, waning tides, and murky, fog-clad tableaux that would instantly drive any psychiatrist to the fetal position. But it is that poignant element I also see and seek in theRedseries.

To me, it is the most important element, the unifying element, the concept that links all the images. For often, even these most evocative natural scenes also require a counterpoint, something that communicates, touches, or draws one into the image. It’s an element necessary to every successful image, else it’s just a lifeless recording of an unremarkable instant.

For now, in certain very select images, I find the inclusion of the lone figure with the red umbrella an accent, yet very descriptive of the solitude that exists in even the most frenetic environments. In that grand, Cosmic Cycle that envelopes us all IÃ‚ºm sure new revelations and inclinations will hold me in their thrall; but for now, I’m traveling withRed. 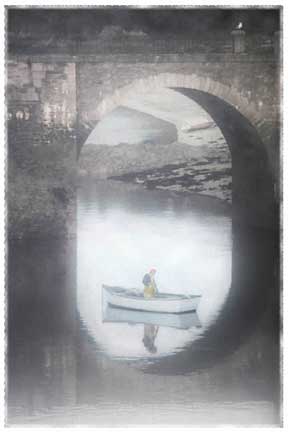 I mentioned at the beginning that I wanted to say something at the end. Not so long ago, when I was overwhelmed withPhotoshopand considerably under whelmed with my knowledge of it, I placed much more importance on the supposed capabilities of a computer and its software. As I find I can more easily get my ideas into the computer and out of the printer with a fair amount of fidelity, I find it is, just like any artistic endeavor, the idea that counts. Friends, photographers, and those who have bought my prints urge me to teach a course, or at least a class. I don’t believe I have nearly enough knowledge to charge them the exorbitant sums that my delusional self-image requires. The truth of the matter is, how long does it take, and in how many ways can you say: you put into the viewfinder and onto the monitor what has been rattling about in your heart and in your mindÃ‚ºs eye for quite some time.

It’s not the camera, computer or the software that makes an image, any more than it’s the parchment, the quill pen, or the typewriter that makes a memorable tale. When I see the many, many beautiful images on this site, I know I am not speaking to the uninitiated, but from the countless inquiries I receive about my computer, software, and peripherals, I wanted to make sure to communicate that no matter how cutting edge the equipment, dross is one’s destination without the idea. Hope you enjoyed the snaps, and I thank you, and especiallyMichael, for his site and the long hours that I know must go into it, for his knowledge and the sharing of it, and for the inspiring photography that has allowed me to admire the beauty found throughout this land.

This subject is featured in Issue #4 of The Luminous Landscape Video Journal. Big Lens‚ Big Issues Pentax's600mm f/4lens weighs 13lbs. It's 14.5" long and