Click onHEREto play a 15 minute long video interview
conducted by Nick Devlin with Bill Gouge of Pentax Canada
regarding the Pentax 645D.
Safari may have trouble playing this file. Please try Firefox or another browser.

In late August 2010, I finally got a chance to get up-close and personal with thePentax 645D. My sense is that this camera will be a bit of a game-changer. 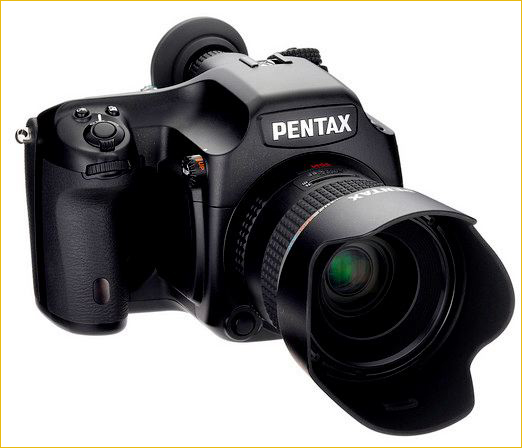 This camera just feels good. Mechanically, it has inherited the DNA of thePentax 645N II, which was a very fine camera indeed. It sits and balances in the hand effortlessly. The fit-and-finish leave nothing to be desired. The camera is fully weather-sealed, as are all newly-designed 645D lenses. This is a huge development for outdoor photographers, and suggests that Pentax knows exactly who their market is.

The camera’s use of dual SD cards, and the same compact lithium battery as in their consumer DSLRs, saves space and are a compelling design choice.

The 645D’s most important feature (other than price) is that it sports the K-7’s electronics, which make it a state-of-the-art DSLR. The camera has a sophisticated multi-segment metering system, every exposure control mode you could image, and the ability to operate a multi-flash wireless TTL array when using Pentax’s higher-end flash units. This will be of real interest to wedding photographers in particular.

The sumptuous rear LCD is as good as anything on the market, and light-years ahead of the main MF competition (thesmall and dimly litknow who they are). With the modern avionics on the 645D, this display also adds usability, since it can offer a quick overview of every camera setting all at once (á la the K7 system).

In my short time with the camera, the digital-mechanical integration appeared seamless.

The 645D has a lot of buttons, but they are big and most of them are not modal. Rather, they do exactly what they labeled for. By creating a totally integrated digital camera, Pentax is able to use the much larger body area to spread out the imaging-related inputs. While I am a bit of a minimalist, I really like this control array.

The camera is quick and easy to use.

Unlike any of its competitors, the 645D has an 11-point AF system, conveniently user-selectable with the rear 4-way controller. The focusing feels quick (and silent with new 55mm SWM lens) and the shutter release is smooth. I need much more time to test the AF’s mettle, especially with the unique arsenal of zoom lenses, such as the 33-55, 45-90, 80-160 and 150-300, all of which sport relatively modest maximum apertures. My first impressions, however, are positive.

Pentax enters the MF race with the largest existing system of 645 lenses. Ranging from 35mm to 400mm, the original Pentax 645 lens system gained a solid reputation for quality, along with very attractive pricing. The Pentax 645D can use all of these lenses (with a 1.3x crop factor), without any loss of functionality, which will be music to the ears of thousands of photographers who held on to their systems rather than fire-sale them on EBay over the last few years.

With at least the last generation of 645 “FA” autofocus lenses, the 645D is able to recognize which lens is mounted. This allows access to a number of the camera’s features, including shifts in program curves to match the focal length and optimum aperture and the simple, but convenient, addition of lens information to image metadata.

Pentax is also planning a new line of digitally optimized lenses. The first of these is the 55mm f2.8, which features ultrasonic focusing, which Pentax calls SDM (Supersonic Direct Drive Motor). A new fixed wide angle (read very wide) is rumoured to be the next addition to the lineup. These lenses are “digitally optimized”, a phrase we have all come to know, if not understand. Bill Gouge of Pentax was careful to note that there may be some chromatic aberrations visible with older lenses, due to the tighter tolerance of the digital image plane vs film. (In the video accompanying this article Bill mentions the possibility of reduced image quality — this applies only to older lenses, not the new digital lens-line). This will require detailed testing when a production camera with final firmware is available. I didn’t see anything in my few early snaps, but this is something I will look at closely, especially with lenses at the extremes of the range.

The 645D is also unique amongst MF cameras in offering a dust sensing and removal system, similar to that found in its top-end 35mm cameras. This feature works very well on the K7 and, if equally effective on the 645D, will be a real score for field shooters. With a lot more mirror movement, and acres of dust-prone CCD real estate, MF digital cameras remain very vulnerable to sensor dirt. Pentax could be well ahead of the field in addressing this issue.

The big question, of course, is image quality. Since Pentax has not provided full-production cameras to any of its subsidiaries outside Japan, a full appraisal of IQ has to wait. That said, from the few ‘backyard test frames’ I did get to shoot, my cursory impressions are that (i) the richness of detail (which is MF digital’s raison-d’être) is there; (ii) the images seem to have a lot of ‘guts’–the ability to pull a lot of detail out of underexposed areas; and (iii) ISO 1600 looked pretty good.

I will be especially interested to see how higher-than-base ISOs test-out, since this has traditionally been MF’s Achilles’ heel, but what I was able to achieve with light noise reduction in LR3 on an ISO 1600 file from the 645D certainly got my attention.

I stress that this was not a production camera, and real testing is needed. I doubt that ultimate IQ will be better than what’s on offer from Phase or Hasselblad in most respects, especially since each of these manufacturers’ 40MP cameras are likely using the same Kodak chip. However, for a first-time entrant into the MF world, Pentax seems to have gotten a lot right.

Oh, so you want one? Take a number. They are apparently selling like hot-cakes in Japan (or at least selling as fast as Pentax can make them), so we are unlikely to see any in Europe or North America until late October at the earliest. At $10K, a lot of pros in the wedding and location business, along with many landscape shooters, will find this camera seriously interesting, so there may be quite a line-up.

Nick Devlin is a barrister and photographer in Toronto, Canada. He works as a Federal Prosecutor, specializing in major drug and terrorism cases. With almost twenty years behind the lens, Nick worked extensively as a photojournalist and pro sports photographer before turning to the law. Presently, his main visual interests are urban landscape, portraiture and travel photography.