There are a number of myths about adjusting photographic perspective with PhotoShop.  Some think that it is a suitable substitute for the use of a tilt/shift lens, or the use of a view camera.  Others say that even though severe distortions are introduced, in landscape photography they are not as visible or objectionable as with an architectural image.

Of course, photographers have been using a similar technique with their enlargers for a hundred years. Below then is a brief introduction on how to accomplish perspective control in PhotoShop.  You can draw your own conclusions.

The image below was taken in Zion National Park during a heavy rain storm one fall. 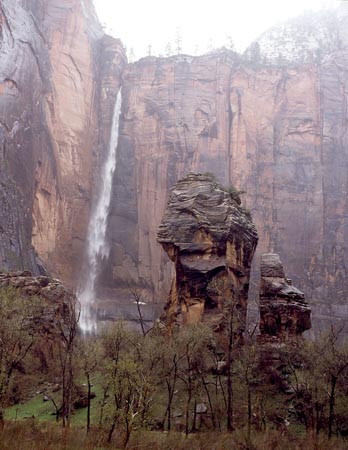 As can been seen, because of the upward tilt of the camera (a Mamiya 645 with 150mm lens), the waterfall appears to be tilting backwards.  This effect is called keystoning. A tilt/shift lens such as those from Canon, or a view camera with a rising front would have eliminated the tilt.

Here is how it looks, adjusted with PhotoShop. 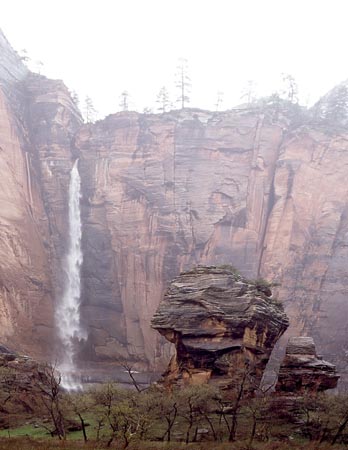 The tilt is gone, but look at the large boulder in the foreground.  The trees also look like they’ve been blasted outward by an explosion. Not exactly a natural rendition. But, if you would like to try this technique, here’s how to accomplish it.

First, if you do not already have them turned on, turn on View/Show Rulers.  Drag a guide line from the left-hand ruler onto the picture, with the line close to the edge that you want made straight, such as the waterfall.

Choose Select/All and then Layer/Transform/Perspective.  This will place handles, or control points at eight locations around the image.  You can now drag one of the handles at the top to the right or left.  When you stop you will see the change that PhotoShop will make.  When you have the point positioned so that the vertical lines in the image are straight, double click within the picture.  This will make the change affective.  Be aware that this is a very computation intensive task for the program and with a large file you’ll need lots of RAM and a fast processor.

That’s all there is to it.  Only you can be the judge of whether or not the distortions introduced justify the benefits.