There is a phrase that’s currently hot in the computing world —pervasive computing. It refers to the imbedding of microchips in virtually every device around us, from our phones, to our cars, microwave ovens and so forth, along with their forthcoming wireless interconnectedness viaBluetoothandWi-Fi.Computers R Usis who we will be.

Something similar is now happening with cameras — tiny digital cameras. They’re appearing everywhere, in particular PDAs and phones. The hottest PDA on the market today (Summer, 2002) is theSony CliÃƒË† NR-70v. This Palm OS device has a built in digital camera that makes taking snapshots a breeze (but at a 320 X 240 pixel resolution they’ll never be more than snapshots). Taking a photo is as simple as pressing a dedicated button and previewing it live on the built-in colour screen. These pictures can then be saved, transferred to a PC and treated just as those from any other digital camera. 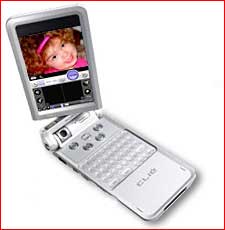 There are also optional card-based cameras that attach to other PDAs, and now even mobile phones that have plug-in camera attachments. With one of these phones one can take digital still photographs and email them instantly, directly from ones GSM phone.

There are also a number of tiny and inexpensive stand-alone digital cameras becoming available. Low-res and pocketable, and likely to become ubiquitous.

But What Good Are They?

Frankly, I’m not totally sure yet. Yes, they’re novelties, and fun to play with, but for the serious photographer do they serve any valuable purpose? I think they just might. 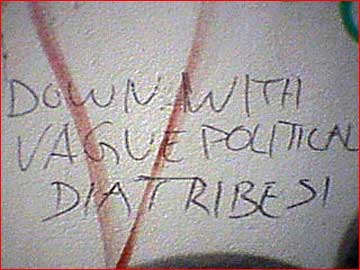 As a recentSony NR70owner I’ve had a little while to play with the built-in camera and here are a few examples of what I’ve done with it.

The above graffiti was on a building wall in downtown Toronto. I got a chuckle out of it and emailed it to a few friends the same day. An example of a photographic notebook application. I can anticipate many others since Ialwayshave my PDA with me, but not always a camera, even apocket-sizedone. 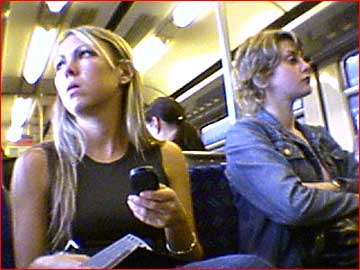 On a recent trip to London I was sitting on a commuter train making some appointment notes on my Sony PDA and thought I’d see how useful it could be for candids. Since I simply appeared to be a nerd scribbling notes these young women sitting opposite me were completely oblivious to the fact that I was also taking a photograph. (Incidental observation —almost everyone in the UK seems to have a mobile phone in their hands at all times.The British are simply mobile phone crazy).

There are obviously some candid and street photography applications to be explored that are made possible by a camera that looks like (and is) a PDA or a phone. This harkens back to the 19th century when so-calledspycameras were built into books and walking sticks. 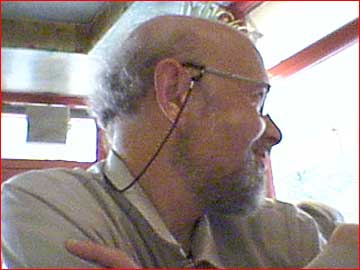 On my London trip I met and had lunch one day with a couple of UKLuminous Landscapereaders. This shot of photographer Mike Hessey isn’t going to win any awards, but serves as a record of our meeting. I can see saving shots like these as a sort of visual diary of people and locations. Yet anotherpervasive photographyapplication.

Today these are low resolution devices whose output is useful for little more than email attachments and visual note taking. But it won’t be long before the resolution increases and the quality improves to the point that they are capable of more — much more.

How might you take advantage of this new technology? 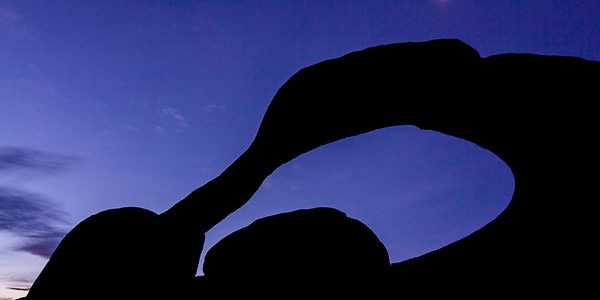 FacebookTweet Black is the queen of all colors. Henri Matisse 1 – Dusk in the Chinle Buttes There is no road there. The only sign

Oh my poor studio! All set up for my own image processing, printing and teaching, and then we have to tear it apart to create