Is there a photographer alive who doesn’t enjoy a drive or walk in the woods when the leaves are turning? Colours are vibrant, the air has a unique smell and there’s a melancholy in knowing that cold rain, snow and dropping temperatures are on their way.

But if you’re like me you’ll find that your fall colour photographs can often be disappointing. The brilliant hues of a sunny Fall day can appear over-bright in photographs, and it’s often difficult to come away with anything other than pretty pictures.

During the last week of October, 2002 I drove to New York city from my home in Toronto to attend thePhotoPlus Expotrade show and conference. The drive tookChris Sanderson(the Director ofThe Video Journal) and me about 9 hours, but we decided to drive instead of fly because the route that we took lead us through the beautiful Catskill mountains of Upstate New York. Fall colours were at their peak, and although this wasn’t a prime year for colour, the drive along Route 17 through the mountains was wonderful.

Fall can be a time of both brilliant colour and drabness. One approach to capturing these alternate states is to find a way to contrast them. In this instance as we were driving through the mountains we saw this field of stubble right next to a wooded area in full colour. 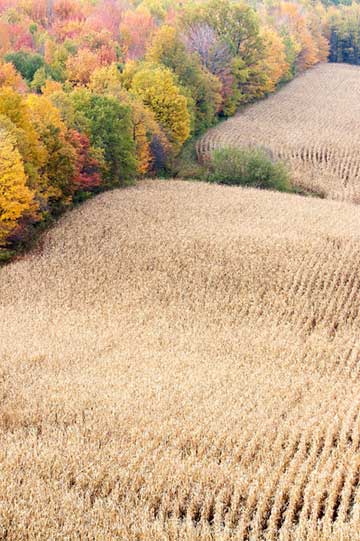 I took perhaps a dozen frames, varying the perspective and composition changing the focal length of the lens. Because there was a shear drop of about 75 feet this was the only way to achieve an effective composition. This frame ended up being the most graphically interesting. It’s a very unorthodox framing, with a large mainly featureless monochromatic expanse filling 2/3rds of the frame, but there’s enough interest in the lower right because of the strong textures that ultimately it works. In fact I walked along the highway for a stretch so that I was more parallel to the rows, so that the dark earth would show though and delimitate the rows more clearly. As with all the images on this page it’s worth viewing them in a larger size (by clicking on each), as it’s the fine detail and textures that contribute to their appeal. These are best seen in a large print of course.

I am partial to that time when most of the leaves are off the trees yet a handful stand out against bare branches. Maybe this is due to my love for Japanese art which carries a similar esthetic. I find that it’s contrasts that attract the eye, and the intricate detail of an image like this also contribute to viewer interest. 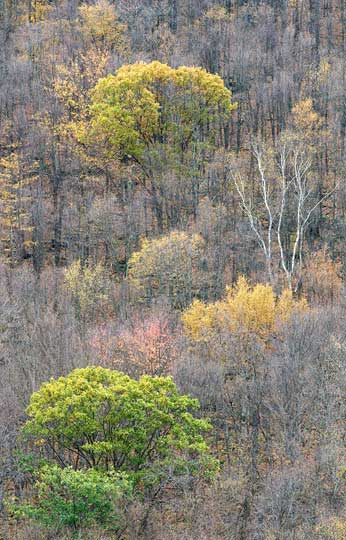 Because this was more of a business trip than a "shoot" I traveled light, with just a couple of lenses and one camera body. My longest lens was the Canon 70-200mm f/2.8L IS and I used the D60 in preference to a 35mm film body because of its higher resolution, which I knew that photographs like this would demand.

When shooting landscapes my preference is always to work in medium format, but the D60 accounted itself well — though providing not quite as high resolution as medium format. Knowing that the Canon 1Ds that I have on order was due in a few weeks made me wish that I already had it for some of these frames, but regardless, the D60 produced some very crisp images .

On the two days that we drove back and forth to New York city via the Catskills, the skies were mostly overcast. I much prefer this type of flat light when shooting Fall colour because bright sunlight is usually too harsh, and creates over-bright colours with strong confusing shadows. 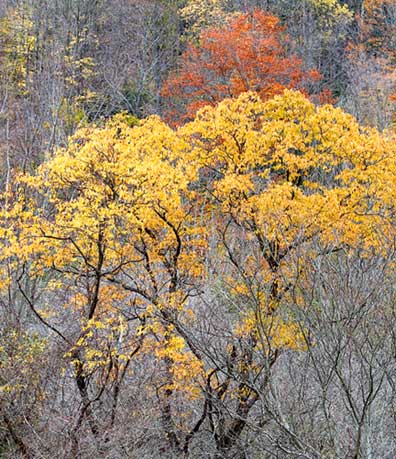 Here again the contrast between the bright leaves and the bare branches creates a look that is reminiscent of some traditional Japanese artwork. I took dozens of frames like this trying to achieve at least one with graphic simplicity that I was looking for. This is the best of the lot, though I’m still not completely happy with it.

We left the city early for our drive home, in part to escape rush-hour traffic but also to get into the mountains while the light was still good. We found ourselves at theRockefeller Turnouton thePalisades Parkwayjust as the sun was cresting the horizon. This shot works because the Fall colours are muted due to the low light levels. The sun is just catching the top stories of theEmpire State Building, and the the lights are still on on theGeorge Washington Bridge.

Manhattan From The Palisades. November, 2002

South of Buffalo, New York isLetchworth State Park. I hadn’t been there in many years so we detoured into the park for a couple of hours. This turned out to be fortuitous because colour was at its peak and we ran into a sudden snow squall that created almost white-out conditions for close to an hour. If we’d been on an expressway we would have been in trouble, but as it was we simply cruised slowly through the park. 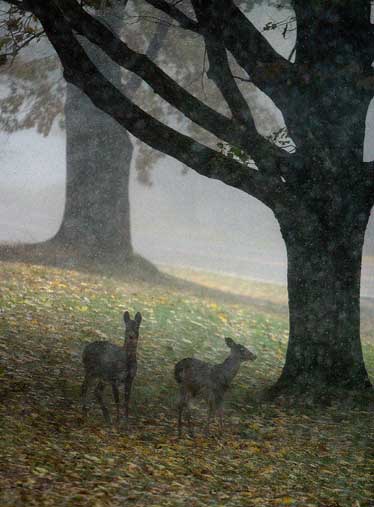 At one point during the heavy snow we saw two deer grazing by the side of the road. I walked towards them as close as I could without spooking them and started shooting. This was the first frame, and the most interesting. The blur caused by the snow has created an unusual textured effect in the shadow areas that makes a large print look somewhat like a pointillist painting.