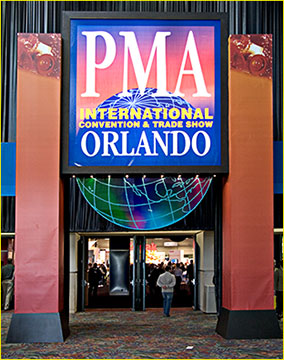 This is by no means a comprehensive report on the show. I am attending for only two days, and will simply be commenting on those things that I saw which interest me, and which I feel are noteworthy. If I missed something that interests you, I urge you to visitDPReview, or any of the several sites that are providing in-depth show coverage.

Canonhad it’s Digital Rebel XT / 350D on display, which was announced last week. At 8 Megapixels and under $1,000, with image quality up there with the 20D, this is a camera for the rest of the industry to contend with, and a great choice for anyone looking for an entry-level DSLR.

My first impression on handling it at the show was that the body certainly didn’t have the qualityfeel of a 20D, but was by no means cheaply made. If anything though, it wastoo smallfor my hands, and my hands aren’t very large at all. I think that many men with large hands will find it to be problematic without the battery grip. This is just a first impression, and so please take this with a grain of Florida sand until I get a chance to field test a camera, which I expect will be very soon.

Nikonhad its new just-about-to-ship flagship camera, the D2X at the booth, and also were displaying numerous large (20"X24") and bigger prints. Frankly, they were stunning! This is the best image quality I’ve yet seen from a Nikon DSLR, and is superior to what I was expecting, given the high pixel count and small pixel size of this new 12.4MP chip from Sony.

Sample images shown at Photokina were not very impressive, according to those that had a chance to view them. But the prints that I saw at the show today were knock-outs. The four months since announcement have been well used by both Nikon and Sony in lowering noise and improving colour fidelity. Nikon owners finally have a state-of-the-art high-res DSLR to shout about. 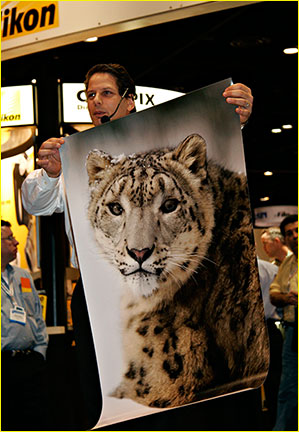 I was less impressed with high ISO test files that I saw which were taken by a colleague. A seat-of-the-pants judgment is that ISO 1600 with the Nikon D2x looks like ISO 3200 on the Canon 1Ds MKII, and ISO 800 on the Nikon is not as good as ISO 1600 on the Canon. Let’s call it a 1 stop disadvantage for the Nikon at high ISO. Low ISO images though are exceptional. I don’t know yet about mid-range speeds, such as ISO 400, and we’ll have to await knowledge tester’s results before any firm overall conclusions can be drawn.

One other Nikon product that impressed was the new WT-2A wireless transmitter. Except, it’s also a receiver. Based on the much faster 802.11g standard, this new device is able to not only transmit image data via WiFi, but also control the camera that way directly from a computer’s keyboard, just as one can in tethered mode. Now why didn’t anyone think of that before?

Leica has finally announced a ship date of April for its 10MP Digital Module-R, with a price of US $4,495.

DxO Labs has announced V2.2 of Optics Pro along with a revised pricing model. The program costs US $139 along with both raw and jpg support for all mid-range and low-end DSLRs supported so far, along with 1 lens module of the user’s choice. A version called Elite sells for US $219, and includes support for high-end cameras as well as those in the regular version. This includes the Canon 1Ds MKII, and next month, the Nikon D2x. A lens correction module of the customer’s choice is also available at this price.

A first for DxO Labs is their support for Adobe’s DNG format. Raw files can be exported after processing in Optics Pro, in DNG, and then brought into Camera Raw, for example, for further and final raw processing. That’s cool.

I am currently testing Optics Pro 2.2, and am quite impressed with many features. I will have a full test report online within the next few weeks.

DxO Labs was also displaying technical demonstrations of technology that they call DxO Lighting, and DxO Noise. DxO Lighting is a technology for automatically adding detail to shadow area, and adjusting tone variations without degrading the image. The demo I saw was very impressive, almost like a super version of local contrast enhancement.

DxO Noise technology is designed – you guessed it – to remove noise from high ISO files in digicams or DSLRs, or from small-chipped cameras, such as those used in cell phones.

These new technologies will be showing up in future products from DxO Labs, as well as others, and we can expect to see them commercially available later this year.

Epson has the R1800 printer on display, and as you might imagine, this is simply a scaled-up version of the R800, with similar advantages in printing on gloss and semigloss papers. Those preferring to print on matte papers will not find that this printer offers them any significant advantages.

Sony was showing a pre-production sample of their HDPS-M10 pocket card reader, hard disk based storage device. No screen, just an LCD showing a progress bar. Availability around June, with a price around $300. It takes CF cards as well as Memorysticks.

Without a screen though, I wonder how many photographers will find this of interest, when for not that much more devices like the Epson P2000 offering superb file viewing capability. Looks like Sony lost the plot on this one.

This is a Windows XP only application, with no word on availability of a Mac version (boo). You can read a preview onDigital Outback Photo.

I saw it demoed at the show and was very impressed. I expect to have a look at the program in the weeks ahead, but since it’s currently a free download, why not check it out for yourself? 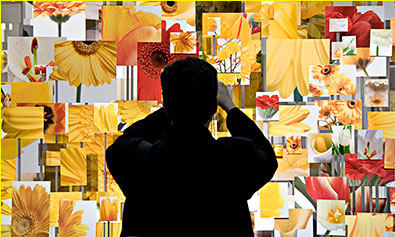 I realized at the end of the first day of the show that I had missed Mamiya. I was surprised that I hadn’t noticed them, and so first thing Monday morning I went to their booth, as listed in the show directory. They weren’t there, and instead another company occupied their space. They also weren’t anywhere else to be found.

I asked several of my colleagues what they had heard, and all I got were shrugs. No, Mamiya was not at the show.

But I also got some disturbing comments from a couple of folks who have their ear to the ground, and this is that Mamiya appears to be having trouble completing the ZD camera and backs. The story goes that the earliest that these will see the light of day is now this coming summer.

That’s all I have heard, and even this is just an industry rumour. But, the fact that they had a booth reserved at PMA (since they’re in the show directory), but then pulled the plug, would seem to indicate that they would rather be a no-show than have to field difficult questions. I don’t like publishing conjecture, but in the absence of any official word from Mamiya, all I can do is speculate. If I hear anything authoritative I’ll let you know.

ToCADis the new distributor forContaxin the US, Kyocera having decided to end their direct activities in the US, and go with a separate distribution company. Nothing new from them at this show, though a relationship between Contax and Phase One seems to be brewing, since Phase One was featuring Contax cameras at their booth, and ToCAD has a Phase back on their 645AF demo body.

Leafwas there, but not showing their Valeo backs. Strange. While I’ve heard that the new backs are now starting to ship, and I hope to be able to do a test soon, the Kodak purchase has complicated things, I’m sure. Time will tell.

Hasselblad / Imaconwere in an invitation-only meeting room, but not on the floor of the show. Given that Hasselblad usually is a major presence at any photographic show, it gives one pause.

Oh how the mighty have fallen. At the back of the hallRolleiwas showing their 6008AF with custom 16 megapixel Phase One P20 back. The sad thing was that the booth was tiny, the type usually occupied by third-string companies selling off-brand inks from Taiwan. As one industry wag put it, looks like Rollei has a death wish, and that their wish isn’t far from being answered.

All the usual suspects were there in force, Olympus, Konica Minolta, Pentax, etc. But, other than a slew of me-too digicams and video cameras, there really wasn’t much new of interest. Most people I spoke with agreed that this was one of the more lackluster shows of the past few years.

Now I’m off to the Florida beach for a few days of R&R. But I did have a chance to do some test shots at the show with one of the new cameras of interest, and I expect to have some observations here before the end of the week.