As the Boy Scouts say, “Be prepared!” Well, this advice applies to photography as well. In fact being prepared may be just as important as being there. What good does being at the right place at the right time do if you are not ready to capture the scene in front of you? This point was never made clearer to me than during my most recent visit toGrand Canyon National Parkin July, 2001.

Being on theNorth Rimof the Grand Canyon I decided to pay another visit toCape Royal, one of the most impressive overlooks I know of. I had photographed this location several years ago and wanted to revisit it with new eyes and new photographic equipment. I was there for sunset which is guaranteed to be dramatic if the sun decides to come out of the clouds. However July is the monsoon season in Arizona and it often rains every afternoon.

That day was a typical monsoon day. Although the monsoons bring dramatic weather they also force you to wait and sometimes go home empty handed after spending all day looking for something worth photographing. On that day I ended up waiting while it rained and the sun refused to come out. Nearing sunset I decided to set up the 4×5 anyway knowing that if the sun appeared I would have to be ready because things would happen very quickly. 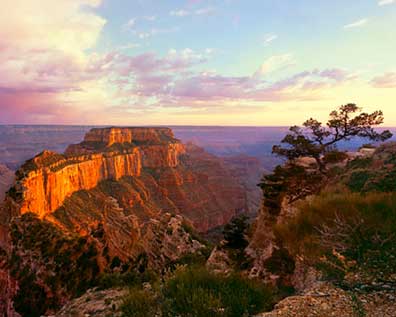 Well, the sun did come out and suddenly the landscape was bathed in golden sunset light while the rain kept falling down. By that time I had composed this image  and had just started exposing several sheets of 4×5 Velvia to bracket the exposure. The light was fantastic — everything I could have hoped for and more — and I wanted to make sure I had several transparencies available in case one got damaged or in case I made a mistake calculating the exposure. As I was busy working I heard other people on the overlook ooh! and aah! This made me turn around and I saw this incredible scene right behind me (below)). I had exposed only one sheet of 4×5 by that time and I did not want to move the 4×5 camera. However, what was happening behind me was fantastic and I wanted to capture it on film as well. 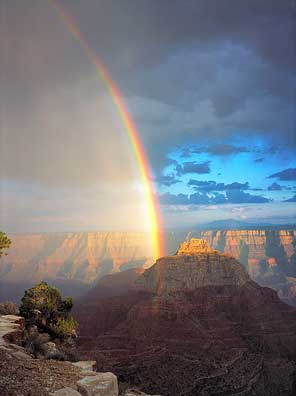 I quickly reflected on what could be done . There were only two options, A and B. Option A called for moving the 4×5, changing the lens, composing the image, re-focusing the camera under the dark cloth and, perhaps, if the rainbow hadnºt vanished during that time, get the shot then do everything in reverse to continue bracketing my previous image. Option B called for forfeiting the superlative quality offered by the 4×5 and use the $2000 medium format point-and-shootFuji 645ziwhich I always carry with me.

In other words I was prepared and I am sure you guessed which option I selected. I grabbed the loaded 645zi, exposed a full roll of 120 film and went right back to the 4×5. This only took me a couple of minutes and during that time I was even able to vary the focal length and the composition thanks to the 645zi built-in zoom lens. By the time the roll was over the rainbow had started to fade. It had lasted only a couple of minutes and I would never have captured it with the 4×5. However I was prepared, did not miss a beat and got both shots.

On any day I would be glad to have either one of these two images on film. To me they are both outstanding and I canºt decide which one I prefer. And yet without my second camera I would only have captured one or the other and possibly none at all.

I always carry two cameras no matter what format I am using just in case something goes wrong or a situation like the one described here occurs. I strongly recommend you do the same. Deciding which of these two photographs I like best may be hard but it is definitely more fun than having to decide which one to sacrifice.

Fuji GFX 50S At least once a month I try to do a Sunday road trip with my wife Debra.  She's a passionate photographer like me