A Sunday afternoon in late winter. The city is cold and bleak, but though I’m itchy to do some shooting nothing comes to mind. My still relatively newLeica M7hasn’t been properly inaugurated yet. But the day is gray and I’m feeling lazy.

Relaxing with a book I casually hear a traffic report on the radio that says to avoid one of the main downtown streets as there’s going to be a parade. A parade? I go online to see what it’s about but none of the sites that listWhat’s OninTorontotoday say anything about a parade. But, since the location is only a 20 minute walk from my house I decide to stretch my legs. I grab the newM7andTri-Elmarlens, a couple of rolls of film, and head out the door.

Indeed there is a parade of sorts, but it’s actually aShiite Muslimreligious procession. It is in celebration of a holiday which I’m not familiar with, and is also serving as a protest against persecution inPakistan. It is peaceful, yet fervent. Several hundred men and boys marching downAvenue Roadwith an equal number of women and girls following behind them. 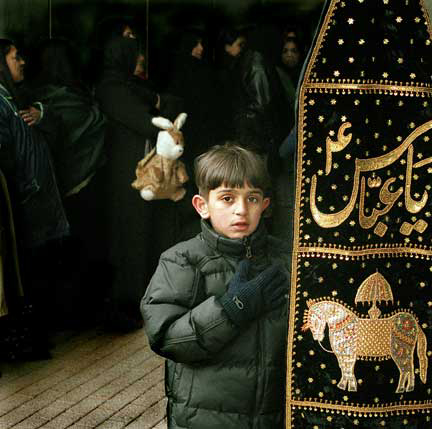 I start shooting, walking with the procession. I burn through two rolls of film quickly, knowing that I’m not really getting anything special because the street’s background‚ office buildings and cars‚ is messy and confusing. I run out of film at around the time that the front of the procession arrives at the covered rotunda of a courthouse building.

I pop into a corner variety store in search of more film. Two rolls ofFuji Sensia 200is all they have. That’s fine. 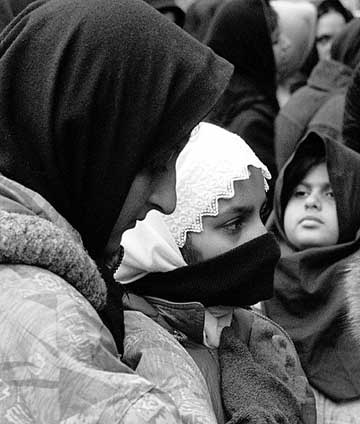 For the next half hour I wander among the crowd. Everyone is bundled up in their winter clothes. Many are chanting and beating their breasts in unison. Women are mostly garbed in black with head scarves. Everyone is caught up in the fervor of the chanting.

Somehow I am almost completely ignored by everyone. I feel like I’m wearing a cloak of invisibility.

In The Courthouse Rotunda 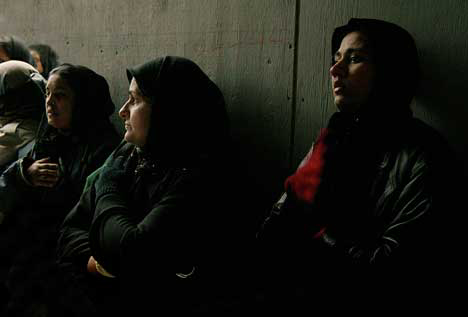 The next day while inspecting my film I find, as expected, that none of the shoots taken during the street procession work. But there are several from the courthouse rotunda that are strong. The clean concrete background and mysterious shadows created by illumination that is the equivalent of window light, remove the scene from its contemporary location and make it seem distant‚ almost timeless.

There is richness in the shadows of both of these frames that I’m afraid is lost on the Net. In prints there is tremendous detail, texture and luminosity to the shadows.

On a technical note‚ I used theLeica M7on autoexposure, and notwithstanding that I was shooting wide-latitude color negative much of the time I found all of the exposures, even those shot in tricky light like the ones on this page, to be very accurately exposed.

Here are several other pages on this site that are relevant to street photography.

Issue #4ofThe Video Journalcontains a major segment on the art and technique of street photography.