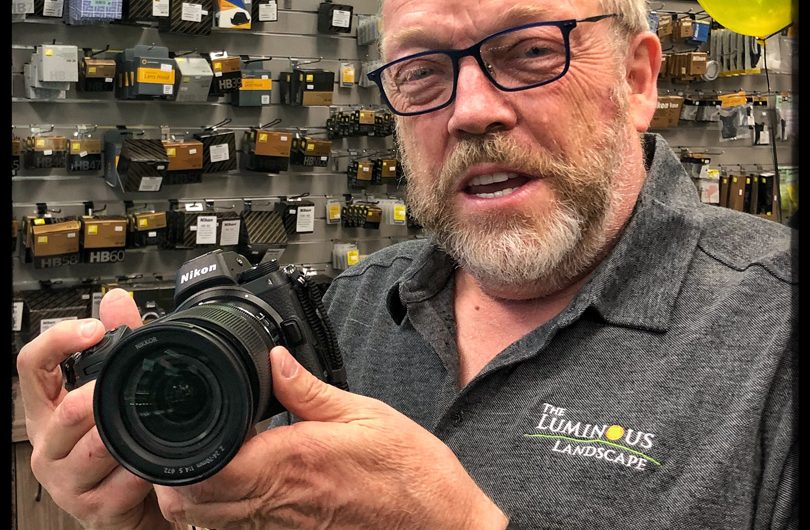 My Thoughts On The NEW Nikon Z6 and Z7 Cameras As you may have noticed, there was no mention of Nikon Z6 – Z7 on this site’s home page. There are a few reasons for this. First, I was running two back-to-back workshops in the Palouse. I also never received an invite to the press event or any press material that would enable me to prepare a story ahead of time, as is the usual procedure with other camera companies. Like many of you, I watched the live announcement from Japan to get some preliminary knowledge of the new Nikon cameras.

By the time I would have been able to prepare anything, it would have been 4:00 AM, and time to get up for the sunrise. Also, within minutes of the announcement, hundreds of sites were expressing their opinions about the new cameras, without even seeing or holding one. I don’t believe in doing this. We have always reported on cameras we have seen and touched, and if they were pre-production models, we said so.

It seems that a long time ago, Nikon fell out of grace with Luminous-Landscape — or should I say, Luminous-Landscape fell out of the graces of Nikon. From what I heard, it was due to something Michael had said. Those of you who knew Michael know that he called it as he saw it, and I suppose he said something that Nikon didn’t like. I also wrote a story about Saying Goodbye to My Nikon when I made the switch to mirrorless years ago. Since then, we never hear from Nikon.

Canon, Fuji, Olympus, Sony, Panasonic, Leica, Phase One, Hasselblad, and others all keep us in the loop with press releases and news about products. Not Nikon. So Nikon, if you are reading this, maybe it’s time for you folks to reconsider. I don’t like getting my news from rumor sites and other YouTubers.

Upon my return from the Palouse last Tuesday, I did have the chance to go to an event at Roberts Photo in Indianapolis, where I saw the new cameras first-hand and spent a bit of time going over them. I also placed orders for a Z6 and Z7, and two lenses. I am buying these on Luminous-Landscape’s dollar, as for the most part that is how we have always tested cameras. It’s not uncommon for us to sell the cameras we don’t like and invest heavily in the cameras we do like. This has been our policy for many years.

For the record, I own (I bought) Olympus, Fuji, Panasonic, and Sony cameras. Yes, these are all mirrorless systems. As we stated in a recent story and video, Mirrorless Revolution 2014 – We Said It Back Then, Luminous-Landscape has always been about working with cameras that show innovation. For us — and most of you are aware of this — DSLRs were just not part of that innovation over the last several years. Finally, it seems that Nikon and Canon have decided to join the mirrorless camera offerings, and based on all the talk, may have felt it was past due.

I’m very excited about this, and can only see the cameras improving even more, with these two major players now in the marketplace offering serious mirrorless solutions. There has never been a better time to be a photographer. More and more cameras to choose from means we will be able to find better tools for the photography that we do.

Within days of the announcement, many YouTubers and other content creators were coming down hard on Nikon. Most were expecting more, and many were critical of various aspects of the camera. I’ll list below what I have read, and if you have been keeping up with the news, these criticisms should not be very surprising.

• Slow auto-focus
• A vertical grip (a battery pack has been announced, but is not the same as a vertical grip)
• Frame blackout between exposures
• A small battery that doesn’t last long
• Single card slot
• XQD card instead of SD card
• Low-quality kit type of lenses at the introduction
• Autofocus that doesn’t hold focus in continuous shooting

Many are claiming that Nikon has botched this camera launch and should have launched a camera comparable to the Sony a7 III. No one really goes into image quality or the dynamic range, other than to restate the specs. Keep in mind, many of the people on a number of these sites hadn’t even seen a Nikon Z camera, other than on YouTube. Still, others haven’t done more than read the specs.

After looking at and holding the Z6 and Z7 cameras, as well as doing some test shots in a very limited environment, I will hold my judgment.

Since it is our policy not to comment on a camera with which we have not spent significant time, I will not say anything at this point. I want to give this camera a chance. Having been in the camera business, I know what it takes to develop a camera. Yes, I would have thought Nikon would have at least exceeded the specs of the Sony a7 III, but so what?  The camera felt good in my hands. The buttons seemed to be well-placed. The viewfinder and screen looked really nice.

I am a bit baffled at the lenses available at launch. I would have loved a 24–70mm and a 70–200mm 2.8 lenses, but these are coming next year. I really want to see how well existing glass performs on the new cameras with the adapter. This will be extremely important for present Nikon shooters who want to use their present lenses. We ordered an adapter and we will try several lenses out with the adapter, as well as the new lenses when we eventually have the cameras.

Now I wait for delivery, and then the fun will begin. I am sorry we didn’t have anything to share at launch, but Nikon seems to have forgotten we exist. I hope that changes in the future. It’s the only camera company that does not stay in touch with us. Let’s put whatever issues there are behind us, Nikon.

This will be a busy month in so many ways. Photokina is right around the corner, and I know we will see more news. We are already hearing rumors about Canon, Sony, and Panasonic announcements. This is all good for us as photographers. Within the coming months, we will be able to line all these cameras up and take a serious look at the things we like and don’t like about them.

Yes, the internet, YouTube, and forums will go crazy with comments and opinions. Eventually, we will add our voice to this, as we get a chance to try these new cameras out. We will make sure we get to shoot with all the new gear that is coming. We’ll most likely do a few On The Rocks episodes about this, especially because Jody and Phil, who are my co-hosts, work at Roberts Camera, and will have formed some pretty vocal opinions of the new releases— plus they’ll have the new cameras to work with every day.

In the meantime, I suggest we give Nikon and others a chance. While many of us will wonder why new cameras have certain features but not others, the main test is shooting with them in the field. Until we can take these cameras out and give them a proper test, we will just report what we can.

I know Canon and Sony have not forgotten us. As new cameras become available — and we expect they will — we will report on them right away. But we will also wait to give these cameras a proper test with production units before commenting on the good, bad, and ugly. For us, as for many of you, the real test will only come when we shoot in RAW and evaluate the properly processed images. I would expect it will be a short time after the release of these new cameras before Lightroom and Capture One, as well as others, are set to handle RAW files.

In closing, I hope Nikon is reading this. Get us back on your press list. The next few weeks will be really fun as we learn what other companies are releasing. Frankly, I can’t wait to make prints from the files and share them with friends. My expectation is that if I took any of the new cameras and shot with them, then processed and made prints, there would most likely be no significant difference in quality between those photos and photos taken with similar cameras. From what I can see, all the cameras will make great files and prints, and in the end, you’ll most likely never tell them apart.

Contrary to what some people think, we are not a Sony fanboy site. Sony has been releasing cameras quite rapidly over the last few years, and I don’t see that abating in the future. Like many other sites, we have become dependent on Sony cameras for many things we do. The image and video quality of the cameras, as well as the new G-Master lenses, set the benchmark for many cameras these days. It’s common knowledge that all the new cameras being released are being compared to Sony specs. We do own complete Fuji systems, with the X-T2, X-H1, X 100T, and X-Pro2 cameras, as well as a large stable of lenses. We have numerous Panasonic cameras we use for our videos. I also love the Olympus cameras and use them a lot, especially when I want to travel light. In the end, it’s hard not to sound like a Sony site when we attend three to four Sony events a year — plus they make nice cameras that work well for us.

Stay tuned. Things are going to get more interesting over the next few months.