A thousand years before photographers claimed the American Southwest as their own other artists made their mark on this landscape. From pre-history, though the Anasazi, to today’s Navajo,Hopi and other native Americans, creating images in this environment has been an ongoing theme.

I’m fascinated by Rock Art as it’s commonly called. I had first seen an example in Canyonlands National Park on a shoot there in January, 2000 at Newspaper Rock. That is an example of a petroglyph, where the image has been cut or scratched into the rock. Much rarer arepictographs, as seen here, where the images have actually been painted on using mineral dyes. 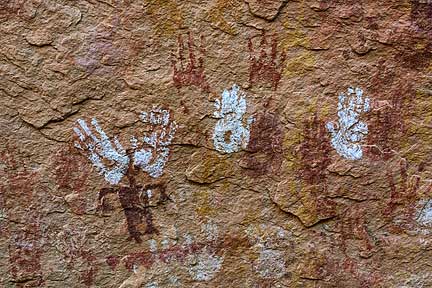 Pictographs are for this reason much rarer, as sunlight and weathering has destroyed all except those that are in well sheltered locations. (And you think you have problems with your inkjet prints fading!) 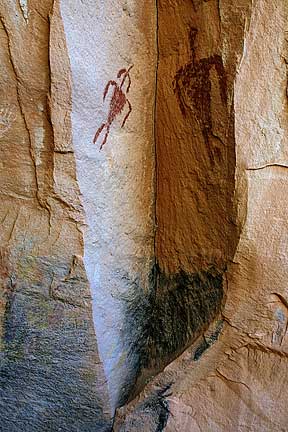 The other major danger is vandalism. Unfortunately unless the locations of these sites is kept secret, (or if within a National Park Ãï¿½such as Newspaper Rock fenced off), the yahoos of our society like nothing better than to deface these ancient art works. For this reason I can only say that this particular location is somewhere in Northern Arizona, under an overhanging ledge which contains an Anasazi ruin. It is at the end of a remote unpaved road and at the top of a very steep climb up a tall is slope. 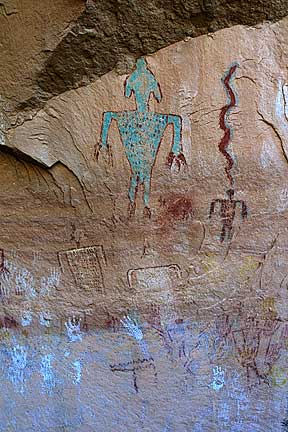 The symbolism used on these rock panels continues to elude us. People have lived in the Southwest for some 6,000 years and there have been various tribes and cultures over the millennium. This panel was likely created by one of theAnasazi“Ancient Enemiesin modern Navajo” who were a people that had developed a high culture with an extensive network of settlements, but who disappeared, seemingly overnight, in the early 1,300’s.

As for my interpretation, the figure on the right looks awfully like someone being struck by lightning 🙂 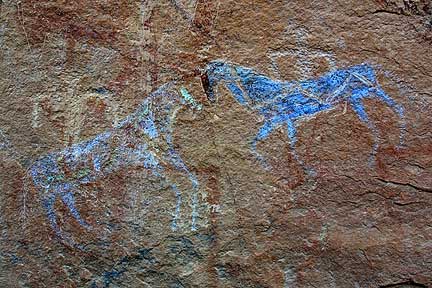 This pictograph, superimposed on an earlier petroglyph, shows two horses and therefore is likelyNavajoorHopiin origin, dating from some time after 1,500 CE, once the Spanish had introduced horses. 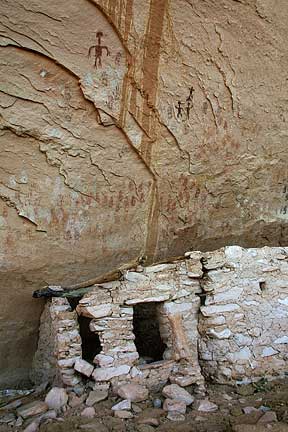 This photograph gives a context to the ones above. The ruins are about chest height. It’s curious to me that the pigment-based rock art actually appears to have survived the centuries better than the stone buildings. Can we expect the same from our art?

One of my colleagues has said that for him photographing Rock Art is as exciting as taking pictures of wallpaper. I beg to differ. For me producing these photographs is an act of continuity with the persons who originally carved and painted them. We both stood at the exact same spot in the landscape and created an image. Them of something from their minds and hearts, me a record, many hundreds or even a thousand or more years later of that vision and its physical environment. I feel privileged to have been there and through these pages to be able to share it with you.

If you have any thoughts on this I’d enjoy hearing from you. Mail.

I very much enjoyed looking at your rock art images of “Mystery Cave”. Thank you for keeping the location private as this is definitely a necessity. More importantly, I also enjoyed reading your text on rock art. I agree with you that rock art is not wallpaper. In fact, I and many other “experts” in rock art research believe that rock art was not made for decorative purposes. Rather, it had a ritualistic, or religious purpose for its creators, a purpose which is unknown to us today.

Although the exact meaning of rock art may continue to elude us this should be put aside. The most important thing rock art needs is respect from us who are, in effect, its contemporary caretakers. Many people wrongly assume that rock art is useless because we do not understand what it means. Such a belief leads to random acts of vandalism by people who have no idea what they are in contact with. The best we can do is learn as much as possible about it and leave it as it is. Rock Art may hold crucial information about cultures which vanished hundreds of years ago such as the Anasazi and other pre Columbian cultures.

In “Mystery Cave” the pictographs (rock paintings) is on the walls along the alcove. Many sites have rock art carved on isolated boulders, or on the end of a cliff face, thus allowing one to photograph both the rock art and the landscape. This makes the art more part of the land, as if it belonged to the topography.

Light is as important in Rock Art photography as it is in landscape photography. For example, you want to avoid photographing rock art in direct sunlight, especially pictographs, as the direct sun washes out the colors. At “Mystery Cave” we were fortunate that the site was in the shade in the morning. Taking photos of pictographs in the shade makes the colors more brilliant, just like it does with landscapes.

With petroglyphs (rock carvings) a reflector can be used to bounce sunlight onto the carvings to give them a 3 dimensional effect. To this end we use a round, disc-like reflector, either White, aluminum or gold color. These discs come in many diameters but I personally like the 24″ model made by Lumiquest I believe. With this implement, when photographing a petroglyph panel in the shade on a sunny day, one looks for a location from where it is possible to catch a ray of sunlight with the reflector and bounce it onto the carvings. Because petroglyphs are carved into the stone from a quarter of an inch to several inches on occasion, the bounced light, which for the best effect should be aimed so it just grazes the carvings, give them a 3D quality making them stand out from the rock. This technique has been developed in part by Ekkehart Malotki who has authored several books on rock art and who is currently working on a new one about the rock art of the 4 corners area. This technique works best with two persons, one photographing and one manning the reflector.

Personally I have seen hundreds of different panels and I neither tire of looking for new ones nor get bored with going back to some I have already seen. I have been fortunate to discover, or rediscover, sites that no white people seemed to know about, deep onto the Navajo reservation, sometimes requiring day-long hikes just to get to the location. I also feel confident that I was the first one to take digital images of some of these panels with the Kodak DCS 560. I have spent untold hours searching for panels along canyon bottoms with or without the reward of discovery at the end of a long day. As Ekkehart Malotki says, when looking for rock art “as long as there is rock there is hope.”

There aren’t a great many books on rock art. One that I’ve found invaluable in trying to understand what I’m seeing and photographing is A Field Guide to Rock Art Symbols, by Alex Patterson. (The link is to AMAZON.COM). The book also contains a list of major rock art locations, though without detailed specifics.

Another worthwhile volume is Art on the Rocks byBruce Hucko.ISBN 1-58071-002-6. This is less academic than the former book but contains numerous well done photographs of a variety of different types of art and sites.

There is no abstract art.  You must always start with something. Afterwards you can remove all traces of reality.  Pablo Picasso 1 - Introduction Creating