At dawn, on a morning in early Fall, I left my hotel room in London, Ontario to drive back to my home in Toronto. I had visited London the day before to give a talk to a local photographic group. Rather than take the main highway home, I decided to drive the back-country roads though Ontario’s farmland. I looked forward to the leisurely drive because the day was forecast to be fair, and I had a new long-lens for my Contax medium format system that I was interested in giving its first field test.

My plans went somewhat awry as a fog started to develop before there was even enough light to see by, and it remained very foggy for the next three hours. What I hoped would be an enjoyable landscape shoot in farm country turned into a slow and anxious drive through heavy fog. 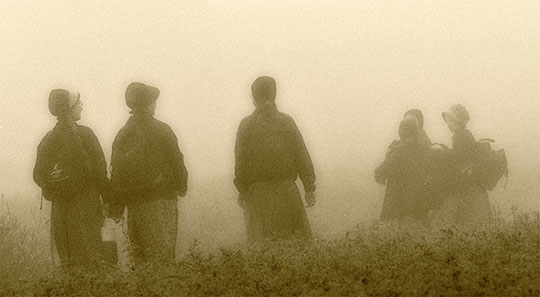 At about 8:30 AM I was driving just south of the town of Elora, when I saw several groups of children walking along the rural road on their way to school. At first I thought that I had entered a time warp. Their clothes were 19th Century, and only their backpack book-bags gave away anything of the 20th, let alone the 21st Century.

I realized quickly that I was in Mennonite country. This religious sect are similar to the Amish of Pennsylvania, eschewing all modernity, driving horse-drawn buggies instead of cars, and wearing clothing that could have been that of their great-grandparents. One of their taboos is photography. They are very shy around cameras. I didn’t want to offend, and so I took only a few photographs, and these from inside my car with a long lens (the lens I had on the camera for testing).

The girls above were walking down a farm lane. Even at 350mm they filled less than 20% of the frame, and so when processing the file I simply cropped and ressed it up in Photoshop. Because of the fog there was little colour, and in any event I intended to make the print monochrome and sepia to try and capture the timeless quality of their garb. I used a bit of gaussian blur, and also added some noise to complete thelookthat I was after. 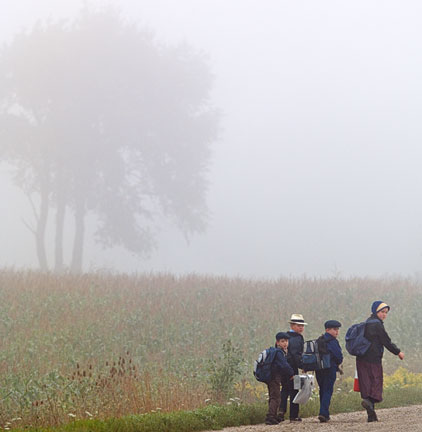 These children were suspicious of me from the moment I pulled my car up behind them on the opposite shoulder. It was a quite country road, and at a distance of some 50 meters I would have thought that I wouldn’t have attracted their notice. But, my large camera and long lens camera certainly did, and I took just this one frame as they turned suspiciously to see what I was about. 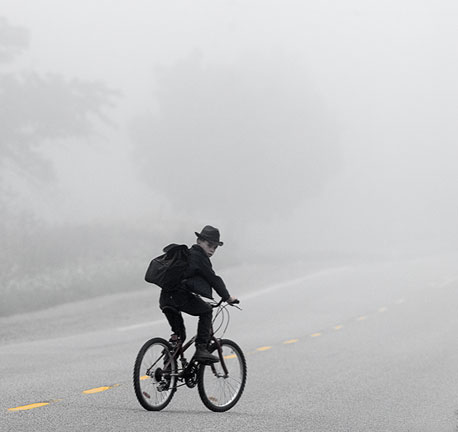 A few seconds later this young man drove past where I was parked on the verge, looking back over his shoulder at what I was up to. Again, I had time to fire just a single frame as he rode past the girls on the other side.

Later that day, as I experimentally converted it to B&W, I liked it better than with its fog-muted colours. But as I flipped back and forth between colour and B&W, I had a thought. How about a mix of the two? I had just re-watched the moviePleasantvilleon TV a few days earlier, and had been reminded of how effective this technique can sometimes be.

Forward into the Past

The mild irony of the day was that my presentation the evening before had been titled –Photography in the 21st Century, Technology and Esthetics, and here I was taking photographs that almost could have been scenes from the 19th Century.

All three of the photographs were taken within 5 minutes of each other, and two of them within 10 seconds. They weren’t what I had set out to shoot that morning, and they turned out to be the only photographs that I took that day. About a half hour later the fog quickly started to burn away, and it turned into a bright, sunny and otherwise unremarkable day.

I suppose that I should have seen it coming after the bullfighting kukuffle of Spring 2004, where thePolitical Correctness Policedescended on this site after I published some bullfighting pictures.

It now seems that the above small photo essay has roused the PCP’s ire again – this time claiming that taking these photograph wasimmoral,insensitive, and worse…

Here’s all I’m going to say on the matter. Photographing people in a public places is both legal and moral; at least that is still the case in the U.S. and Canada. The limitations that sensibly apply have to do with violation of privacy, harassment, commercial use, and concerns regarding holding that person up to ridicule or libel. None of these apply in this case.

There is a rich 150 year-long history of documentary and street photography, and one simply has to look at any daily paper, or watch TV news, to understand that these particular photographs, whatever one may think about their artistic merits, fall within the broad spectrum of acceptable practice.

Since these photographs were not taken for commercial purposes, the subjects were not harrased, were taken in a public place, and no editiorial comments were made regarding them, this photograph clearly fall within accepted common practice.

GildingThe Lilly In May of 2001 I reviewed a program calledICorrect Professional. This was a Photoshop plug-in that allows for the automation of various levels