Back in the late ’70s Vivitar appeared on the scene with a series of‚ for then‚ exceptional lenses. Today the Vivitar brand has been debased and sits at the lower end of the market. But in the mid-70’s to early ’80’s the brand appeared on some fascinating and high quality lenses. Probably the most famous of these was the first 70~210mm f/3.5 zoom wearing theSeries 1moniker.

This series of lenses was designed by an American company – Opcon Associates, of Stamford Connecticut, whose chief designer,E. Betensky had worked for Perkin-Elmer as a senior optical designer. Perkin-Elmer worked extensively at the time for NASA as well as other U.S. government agencies and is renown as the designers and builders of the Hubble Space Telescope’s optical systems (including the near sighted mirror).

One of the least known yet most interesting of the Series 1 lenses was the 800mm f/11 Solid Catadioptric lens. It was originally designed and built for the U.S. military by Perkin-Elmer. There also was a 600mm f/8 lens in the series of the same design. What made these two mirror lenses unique was that they were of a solid glass design, with no air spaces between the front lens, rear mirror and front reflector. This means that this 800mm lens weighs less than 3 lbs and is just slight longer than 3 inches in length. It also means that this lens is extremely rugged. The lens barrel is metal and feels like it could survive reentry.

When these lenses were new I remember readings reviews, examining one at a dealer, and desperately wanting to own one. I imagined all of the great images I would be able to capture if I just had one. But, at about U.S. $650 (around $2,000 in today’s terms)‚ it was at the time completely out of reach for me. 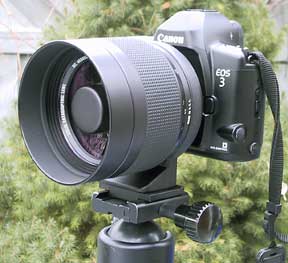 Not long ago though I was browsing the used equipment section of one of the smaller Toronto camera stores and there in the display case was an 800mm solid CAT in almost perfect condition. It came with a fitted case and all four rear-mount filters. I couldn’t resist temptation and so the lens followed me home that same day.

I don’t use very long lenses often. My Canon 100~400mm IS zoom is as long as I regularly use. Very occasionally I have used the Canon zoom with a Canon 2X extender when I want something like a huge sun or a highly compressed layered landscape, but this combination is physically very long and subject to the slightest vibration. Only the most meticulous technique‚ heavy tripod, mirror lock-up and cable release produce acceptable results. In the end this combination isn’t, of course, as sharp as a prime 800mm lens would be. But those lenses are huge, and hugely expensive.

While planning an upcoming shoot, which will likely include some wildlife opportunities, I wondered whether the solid CAT would be worth using. Oh sure, I’d played with it a bit after buying it, but had never really used it for any serious projects. So prior to trying it on location, one cold December afternoon I decided to do some tests. 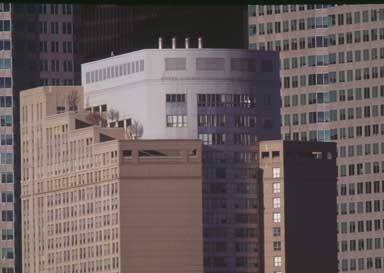 At a distance of probably a mile I shot across the Toronto harbour to some downtown office buildings. The air was crystal clear and the sun bright. The above shot is full-frame and was taken with the Canon zoom and 2X extender.

Below are extreme enlargements from the Canon set-up and from the Series 1 mirror lens. You are looking at the satellite dish to the left of the four smoke stacks on the center building. These enlargements are at “actual pixels” magnification in PhotoShop. In other words, the largest they can be made before pixelation sets in.

The scans were all done with an Imacon FlexTight Photo scanner at 3,200 DPI. The film used was Fuji’s new Provia F 100, the finest grained, sharpest colour film currently made. Of course a heavy tripod, mirror lock-up and cable release were used.

The Canon frame is on the left and the Series 1 frame on the right. 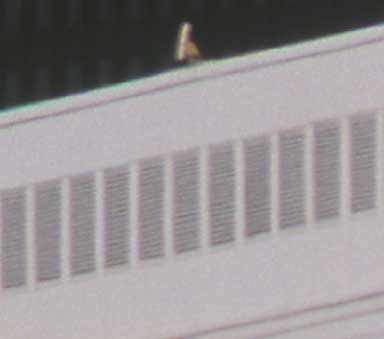 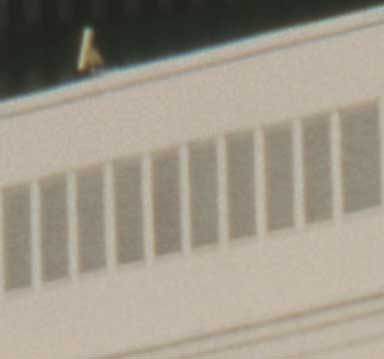 As can be seen there is a marked colour rendition difference between them, with the Vivitar being significantly warmer in tonality. Also, even though both the Canon zoom with 2X extender and the Series 1 mirror lens are ostensibly both 800mm in focal length it appears that the Vivitar frame has quite a bit more magnification.

You probably thought, as I did, that this venerable lens‚ the solid CAT‚ would trounce the combination of a zoom and tele-extender. Wrong, unfortunately. It appears that a modern lens system, even when used at its most extreme is still superior to the best mirror lens that could be designed 20 years ago. This is clearly visible in the superior resolution of the slats in the building’s ventilation system.

So my idea of using the CAT for wildlife has been shelved. In any event, either combination is very difficult to use since vibration at this magnification is extremely difficult to contain. Also, both systems are slow‚ f/11. And, for best results the Canon combination should be stopped down at least 2 stops, which yields a working aperture of f/22. Not exactly convenient.

So the Vivitar CAT goes on the shelf. I’m not sorry that I bought it since it had figured so prominently in my dreams and aspirations some 20 years ago. I wish it had worked out though as a practical tool rather than just a historical footnote.

At the risk of being unoriginal, if you need a really long lens for the type of photography that you do then don’t settle for yesterday’s solution or today’s kludge. A current generation 300 – 600mm lens of moderate to high speed is the solution. Top lens makers have them at usually quite high prices and for Canon owners the new long focal length Image Stabilized lenses are unsurpassed, in quality as well as price. With lenses, as with almost everything else in life, you get what you pay for.

In early 2000 I bought one of the new Canon super-telephoto lenses, the 300mm f/2.8 IS. Remarkably, when used with a Canon 2X extender this lens still provides remarkable resolution and quality. While not of 800mm focal length, as discussed above, this combination creates a 600mm f/5.6 lens‚ quite fast and offering excellent reach and quality.

For anyone interested in the more interesting lenses of yesterday I can recommend the classic third party lenses web site. Lots of fond memories here for those who’ve been involved in photography for a while.