Well, this is a pleasant surprise! Unless you already know this because you’ve been reading the rumour sites you’ll be pleased to learn that Sony has just (Oct, 16, 2013) thrown the camera industry a bit of an aggressive curveball with the introduction of the Alpha 7 and Alpha 7R. An also new and fascinating compact, the RX10 was also introduced today.

I was able to spend a few days in early October with an A7R, and this is a brief hands-on report. The camera was pre-production and I had no raw software available, so I won’t be commenting in any detail on image quality. But, given Sony’s past excellence in sensor design there’s little reason to imagine that it will be anything other than first-rate. It certainly appears to be, based on my informal testing so far.

The A7R is a new breed of hybrid camera. It has a body style reminiscent of the Sony RX1 and RX1R, reviewed previously on this site, though just slightly larger. But it also has a built-in high-resolution EVF and also a tilting rear LCD. Actually it is the very nice built-in ergonomic grip that gives it a slightly larger size. Otherwise it’s very close to the RX series.

The R designation at the end of the model name means that the camera does not have an anti-aliasing filter over its sensor, which might offer a greater possibility of moire, but also a higher resolution image. (At 36MP, moire is of diminishing concern).

The sensor is full frame, with a resolution of 36 Megapixels, making this only the second camera after the Nikon D800e with a sensor this size, of this resolution, and without an AA filter.

The A7R feels terrific in hand. There is heft, but it’s not too much. It is a small camera, but not so small that the controls don’t fall conveniently to hand. Frankly, I find it to be one of the nicest cameras to hold and use in a long time. Sony has been known for bringing out some cameras these past few years, that are, shall we say, a bit interface challenged. Not the new 7 series.

There is a front dial, a rear dial and an exposure compensation dial on the top panel. The menu system is a model of clarity, and moving between sub-menus is easier than ever before. The horror that was the NEX interface is now, hopefully, behind us.

The camera is rated at 4FPS, which is pretty decent for a 36MP camera. My tests confirmed this. Using a fast SD card, the camera is capable of shooting 20 frames in 5 seconds before it hits the buffer. From that point on about 1FPS is possible.

The rear LCD is articulated, and the EVF is located in the center of the body, and has a bright, sharp OLED screen. And for those that want a bit more heft, a vertical handling option, and the ability to run two batteries for longer life, there is a vertical grip coming for $299.

A Matter of Size

It’s frankly astonishing how small the A7R is when you realize that it’s a full-frame interchangeable lens camera. If you imagine it without the grip (which really is helpful for just about any sized hand) it’s hardly larger than the diminutive RX1. It is smaller than just about any APS-C sized Compact System Camera, including the Fuji X-Pro 1 and is a close match in size to the new MFT format Olympus OM-D E-M1. Put another way, this is the smallest interchangeable lens full-frame camera ever made, and that includes the Leica M8, M9 and M 240.  It’s a hefty beast, though its mass speaks well of its robust construction.

The Question of Lenses 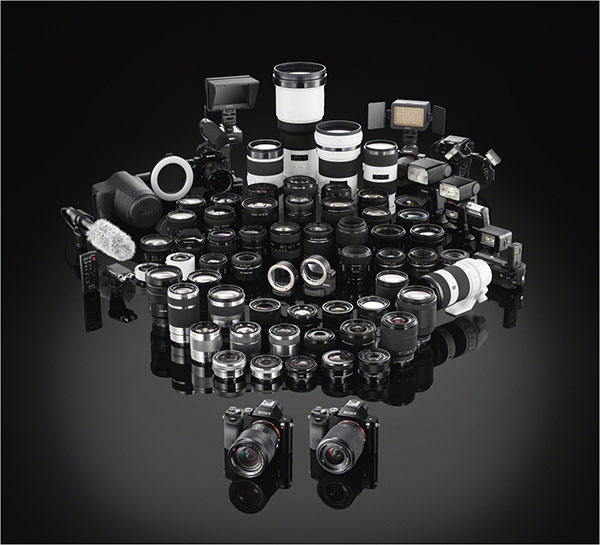 This is where things get interesting, not to mention complicated.

The A7R has a new lens mount based on the NEX E mount. It’s called FE, with F obviously standing for full-frame. Even though the mount is Full Frame rather than APS-C, all Sony NEX compatible E mount lenses fit without an adaptor and work normally. Of course since they only cover the APS-C format the camera recognizes this and the frame is cropped automatically.

There are several new FE mount lenses. These are full frame lenses when used on an A7R or A7. You can also use them without problem on a NEX camera. You can also mount Sony Alpha mount lenses, with full automation using the new Sony LA EA4 adaptor, though I found that than older EA3 adaptor seemed to work just fine. I did not have either the new adaptor or the time to check this out in detail, though it did seem to work properly with the Alpha mount lenses that I have available.

The new line of FA lenses looks like this…

Sony’s lens road map indicates that they expect to have a total of ten FE lenses by the end of 2014, and up to an additional five lenses during 2015.

It should be noted that these FE lenses are full frame, and for this reason can not defeat the laws of optics. This means that they can not be as small as APS-C lenses, which will always have an edge in this regard. APS-C as well as MFT cameras will always have an advantage when it comes to lens size, weight and bulk.

For some photographers (myself included) putting Leica M mount lenses on the Sony A7R may be reason enough to break out a bottle of Veuve Cliquot champagne and celebrate. Using an M to E adapter (I have a Metabones), virtually every Leica M lenses that I own works well on the A7R. Some of the ultra-wide and very wides do vignette, so be aware of this. There is no software correction for this, because we’re mixing and matching. With other systems where the lens and camera are from the same company there’s a lot of magic that can be done in firmware.

I had neither the time nor the full selection of lenses to test in detail what works and what doesn’t, but I think it fair to say that most retrofocus design Leica M lenses will work on the A7R. When you consider that this camera has a high resolution EVF, focus peaking, intelligent Auto-ISO – so manual aperture lenses can be used in a semi-automated manner, and of course a 36 Megapixel sensor, this is hot stuff indeed.

In my opinion, anyone who owns a set of (or even a few) high quality M series Leica optics should seriously look at the Sony A7R. They make for a killer combination, and the Sony costs less then a third of an M240 camera. Just test that the lenses that you plan on using work as you expect before taking the plunge.

I also tried several of my Nikon lenses using a Novoflex adaptor (with aperture control ring) and they too worked just fine, including the superb 14-24mm Nikkor. There is some chromatic aberration visible on some lenses at some apertures, but a trip to the Lens Correction tab in Lightroom or Camera Raw / Photoshop makes short work of this.

Overall, I can not recommend the A7R highly enough for anyone looking to find a new body for their Leica lenses, and who find the price of an M240 a bridge too far, as I did last year. And for those of you with M8, M9 or M240 bodies, the A7R makes a relatively inexpensive second body as well.

Being a Sony, naturally the A7R has excellent video – for a still camera, of course. It features AVCHD at 24P and 60P, and the European variants. There is an external audio input and audio meters as well as a headphone jack. There are settable zebras and the video button is recessed and located on the side of the camera. No more video of the inside of your camera bag, a-la NEX.

The new Alpha 7 and 7R present us with something of a confusing picture of where Sony is going with its product lines. It appears to be a merging of the Alpha line and the NEX line, though I don’t believe that this is actually what’s happening.

Sony’s Alpha lens line is mature, with some 36 different lenses available. The NEX lens line, though not quite as well developed, still covers most of the basis in terms of fast primes and zooms.

The world-wide trend is toward smaller cameras. Maybe it’s the aging population, or maybe just a Japanese trend that is slowing spreading around the world. (Apparently more than 50% of new DSLR style camera sales in Japan are now Compact System Cameras rather than larger cameras with optical finders).

With the A7R and A7 Sony has leapt over the product category chasm in a very cleaver way. They have introduced large sensor, high-resolution cameras but made them the size of Compact Systems. They have provided a migration path for those who own Alpha lenses, and also a migration path for those who own NEX E-mount lenses. The former requires the use of a lens adaptor, while the latter means an APS-C sized image rather than full frame, but it’s a clever solution to be sure.

There is also the new FE lens line, which covers full frame on the new cameras and requires no adaptor or image coverage compromise, though it of course means buying into a new set of lenses.

This all then begs the question – where is the Sony Alpha line of cameras going? Will there be new Alpha cameras that use the existing A mount, or will all new Alpha series cameras from now on take FE lenses? The other question is, what’s the future of the NEX line and the regular E mount?

When asked directly Sony representatives won’t answer these questions. It may well be that they don’t know yet, of even that the company’s senior management and product planners are waiting to see how their new offerings are accepted in the marketplace before making any final decisions. All options seem open at the moment.

But as appealing and as innovative as the Alpha line has been, the reality is that in the DSLR-style segment Sony is an also-ran, behind Canon and Nikon, and likely will be unable to close the gap no matter how good their Alpha cameras may be. Thus a change in strategy was needed.

The NEX line is apparently doing well and has a good market share in the CSC segment. But, people want full frame, people want higher resolution sensors, and people want smaller and lighter cameras. This is what the new Alpha 7 and 7R gives them, without abandoning existing customers. NEX continues separate from Alpha and we can expect new cameras in this line, but of course they will remain APS-C.

I think that Sony has pulled off an excellent solution to their conundrum, and my first impression of the A7R at least, is that it is an excellent and very appealing camera.

And for those who wonder about the future of the Alpha line, make note that Sony calls these two Alpha cameras, not NEX, and not some other new name. They are simply called Alpha. Enough said for now.