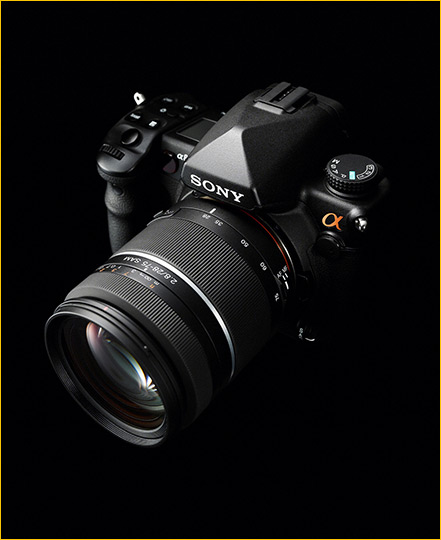 Sony likes to win, and much of the time they do. Betamax was an exception, even though it was technically superior to VHS. But, it then went on to become a broadcast standard that lasted more than two decades, actually outliving VHS. Other than that Sony has a long history of winning products, and of dominating the market segments that they target.

Sony is relatively new to DSLRs, but their acquisition of Konica / Minolta a few years ago gave them a highly regarded platform on which to build (more Minolta, in truth, than Konica). A wide range of cameras in the consumer end of the market has done very well for them, and with last year’s A900, a full frame 25MP model, they have shown themselves to be highly aggressive in terms of pricing – something that Sony isn’t usually known for.

It should also be noted that Sony is one of the few manufacturers of camera sensors, supplying many of their competitors, as well as themselves.

With the new A850 Sony is pushing the price envelope once more. The A900 currently sells for $2,700, with Canon being forced to match them in terms of pricing with the 5D MKII, the only other 20+MP full-frame camera available in this price range. (The Canon 1Ds MKIII is currently about $6,500 and the Nikon D3x is some $8,000, so both are in another league altogether).

The question then becomes – what are the compromises that Sony has had to make to lower the price? The answer, as we’ll see, isvery, verylittle.

The A850 will be available in most markets in September.

Compared to the A900

I have written extensively about the A900 on these pages. This includes mySony A900 Field Review, aSony A900 and Canon 5D MKII Comparison, aSony A900 Update – One Month On, aBig Three Noise Shoot-Out, Bill Caulfield Brown’sSecond Opinion, and Nick Rain’sField Report. Whew! I think that the A900 has probably received more coverage on these pages than any other camera to date.

So, what about the A850? What does it give up compared to the A900? The answer is surprisingly little. The frame rate is reduced from 5 FPS to 3FPS, the viewfinder shows 98% coverage rather than 100%, there is a very slight difference to the body’s metal finish, and the $30 remote control that comes with the A900 is an optional extra with the A850.

I’m therefore at something of a loss as to what to report on. If you read our previous A900 reports they’ll tell you everything that you need to know about the A850, because to all intents and purposes they are the same camera. The sensor is the same, the AF, the in-body stabilization, and just about everything else. Hold them in your hand, look through the viewfinder, peer at every control and menu, and of course compare images. There’s almost nothing of significance to choose between them other than the reduction from five frames per second maximum shooting rate to three.

Be aware that there are no changes to image quality over the A900. But, because the internal file information shows this to be a different camera, Lightroom and Adobe Camera Raw (CS4) can not process the A850’s raw files. We’ll have to wait for updates to these two programs, or –the horror of it– use Sony’sImage Data Converter. My recommendation is to shoot combined raw and JPG for the time being, or at last until Adobe has support for the A850 as part of their frequent program updates. 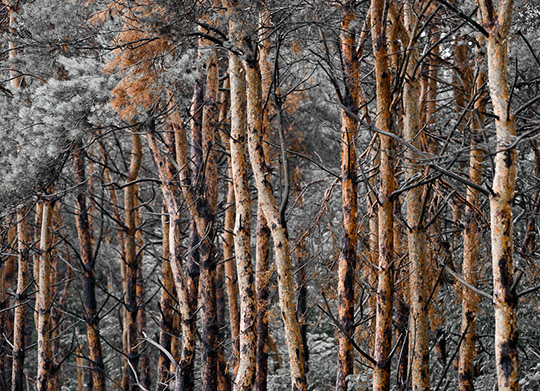 Memo to Sony – (And Some Other Camera Makers)

Isn’t it time to adopt DNG as your raw format? You introduce new cameras every few months, and each and every one needs to have new raw support written for it.Enough already!

You also produce pretty crappy raw software. Wake up and smell the coffee. Adobe, Phase One and Apple simply do a better job. No one except beginners use your raw software.

Do your customers and yourselves a favour and simply adopt the open DNG raw format standard. Your customers will thank you.

The A900, and therefore the A850, have many strengths. Among these are in-body stabilization, which means that every lens is stabilized. The cameras also have the industry’s largest and brightest viewfinder (and I see no difference between the A900 and A850, though there might be some measurable in the lab).

Image quality is as good as that of Nikon and Canon’s 20+ megapixel full-frame cameras, at least up to ISO 1600. So, if you don’t need more than 3FPS, and typically shoot at more moderate ISO’s, the A850 produces images comparable to or better than any other DSLR, including the 5D MKII, 1Ds MKIII and D3x, and does it for a price that is more like that of an APS-C sized sensor camera than a 25 Megapixel full frame model.

Feel and handling are or course subjective. I was always a fan of Minolta’s bodies and user interface designs, and Sony has remained true to that gestalt. For my money (literally) the A900 and A850 are the best handing DSLRs on the market. There is something intuitive and simple about the way that the camera handles, yet the simplicity isn’t due to lack of features. In a word, these cameras feel like they were designed by photographers, not teckies.

Be aware though that these are full-bodied cameras. Large sensors and large viewfinders take up space, so don’t expect some svelte light-weight little number. These are big, serious tools.

Lenses are something that lies between a pro and a con for Sony. Their G series lenses are in the same league as Nikon’s best and Canon’s L series, while the Zeiss lenses that Sony sells are just about as good as it gets – and priced accordingly. Where Sony still has a way to go is in the breadth of their lens line. They have all of the primary bases covered, and also quite a few specialty optics, but they don’t have the 40-50 lens line-up that the big two do, so if you’re looking for a 1,200mm f/4 or a Tilt / Shift you’ll have to look elsewhere.

On the "con" side of the ledger this camera’s most obvious deficits in today’s marketplace are Live View and video capability. Sony’s Live View implementation on the A550 and A380 is excellent – better in terms of autofocus than just about competitor, so it isn’t as if Sony doesn’t know how to do this properly. No Sony DSLR has video yet, and it’s been conjectured that this is because there may be a conflict between sensor anti-shake and video recording. But, I doubt it, since Pentax has sensor-based shake reduction on the K7 and also video capability.

My guess is that in this recession year Sony, as have so many other manufacturers, has decided to pull in their horns a bit. But 2010 is a Photokina year; we’ll likely be well out of the recession, and I expect that we’ll see a new flagship camera (A950?) by then with Live View, HD Video, and hopefully an articulated LCD – which in my view is really necessary to make LV and video properly usable on a DSLR.

Memo to Sony – (And Some Other Camera Makers)

Don’t you actually try and use your products? A fixed rear LCD when shooting video is a total pain in the butt.

So, Sony. If and when you do add video, kindly add a fully articulated LCD. Thank you!

Sony has clearly decided that they want a major slice of the DSLR pie and are pulling out a lot of the stops to make this happen. With the new A850 they are taking no prisoners, undercutting their only real competitor, Canon’s 5D MKII, by 25% in terms of price. Few observers thought we’d see a 25MP full-frame camera for under $2,000 this soon, but I can’t see anyone complaining about it, except maybe the competition.

Making People and Other Things Go Away

How many times have you been photographing a scene and no matter what you do or how long you wait, there is always someone in