There are as many ways of doing landscape and nature photography as there are photographers. For some, such photography is an activity akin to fly fishing. Find a likely spot and work it until you get a catch. For others photography is more like hunting — keeping on the move searching for prey.

For me it’s the latter, and this was brought home to me doing the two week-long workshops which I conducted in Iceland in the summer of 2004. Each workshop consisted of 12 people and lasted for 7 days. During each of those weeks we drove some 2,500 km, at least half of it on dirt roads and mountain tracks.

Because Iceland is located close to the Arctic circle, in late June and early July daylight lasts for more than 21 hours, and on the northern coast there is as little as 30 minutes of “night” each day. These extremely long days, with as much as 4 hours of golden light on either side of sunset create a huge problem for photographers, along with some excellent photographic opportunities. What the problem is can best be summed up in one word — sleep. Or, at least, the lack thereof.

I’ve discussed this issue in my previous article ondoing photography in Iceland, and so in this article will address one other aspect of engaging in a non-stop week of photography, and that’s the need for constant motion. 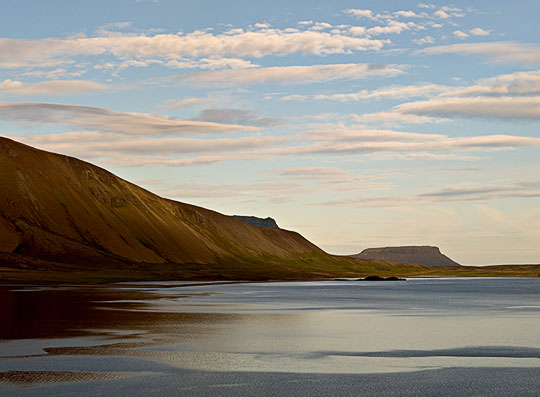 While identifing locations that have a good likelihood of yielding fruitful images is important, the truth of the matter is that almost anywhere can produce strong images as long as thelight is right. Of course, successful images result from the fortuitous combination of light, subject and composition. Light and subject are up to Mother Nature to provide, while creating a composition that ties them together is the photographer’s job. But here’s the crux of the issue. A great subject alone, or some pretty light by itself is rarely sufficient to create a successful image. You need both at the same time! My essayAbstracting The Landscapeelaborates on this topic.

Like the fisherman you can find a likely spot and park yourself there for a while waiting for the light. For some photographers this is the preferred way of working. It requires patience, something which I’m afraid that I don’t have in abundance when I’m on a location shoot. If I have to wait too long for the light I find myself becoming itchy, imagining that there’s something better around the corner. And experience has shown me that more often than not, there is.

For this reason my style of working is to keep on the move, like a shark, which I once read has to keep in constant motion or it will drown. And, like a shark, I am always on the prowl, look for prey, which in my case means that fortuitous combination of subject and light that sometimes comes together to make an appealing landscape photograph.

Why Can’t We Stay Here for a While?

For some of the members of my recent workshops in Iceland this was a common question. We’d be in a potentially worthwhile location, but I was urging everyone to either stay in the vehicles so that we could move on, or at least get back in quickly after taking a few snapshots. I would explain that the situation wasn’t working, but still the feeling for many was obviously there that we’d come all this way (sometimes a hundred miles or more, and not to mention — all the way to Iceland) and so why not get out and do some exploration and shooting?

The answer was, and is, that the reason we were on this expedition was to find and photograph as many first rate images as we could. By stopping and setting up tripods to take what would likely end up as snapshots or postcards (at best), we were denying ourselves the time needed to keep moving, keep looking, and like the shark — stay alive, at least photographically.

The truth is that many photographers are willing to accept the mundane and the mediocre. It’s easy to do so, especially when the subject is attractive, or the light is appealing. But unless both come together at the same time and place, and you can see how to meld them, it’s all just so much self gratification (to phrase it politely), because it is unlikely to produce a compelling image. 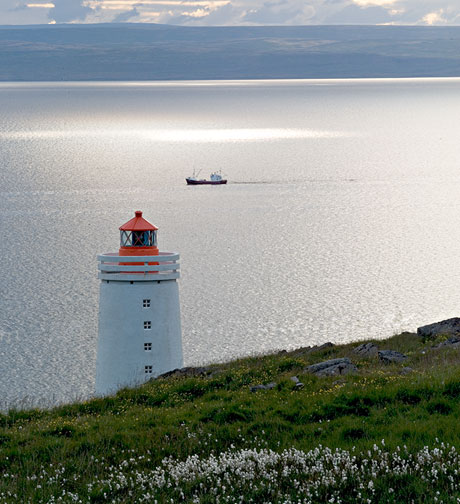 It was about 10pm, and we were driving up the side of a fiord towards the Arctic Ocean to photograph sunset at a beach frequented by Gray Seals. I recalled a pretty lighthouse located along this road, and as we got close I stopped so that we could take some snapshots. But within 10 minutes everything came together. The overcast broke and spotlights of sun started moving across the water. As we shot this we saw a fishing trawler heading up the ford, back to port for the evening. The hope was to find a moment when the spotlight and the trawler would be positioned appropriately in relation to the lighthouse.

The photography gods were smiling that evening, and for a few seconds all the pieces lined up together. It was a highly problematic exposure because of the huge contrast range, and though I shot a series of bracket exposures for blending, in the end I used just one frame because the blend looks artificial. In the final analysis this isn’t an A list or portfolio grade image, though it does rise above snapshot to what I’d call postcard level. But it does illustrate how subject, light and timing must all come together if compelling images are to be created.

I wonder if the trawler was fishing for sharks?