I began my photographic career in the late 1960’s as a photojournalist. For ten years I worked freelance for numerous magazines as well as on staff at a major national TV network. One of the most important lessons that I learned from my editors during this period was "Immerse yourself in a situation, and then take enough photographs to properly tell the story." Telling the story does not necessarily mean producing asequenceof frames, but rather exploring the situation in enough depth to be able to extract the one or two definitive frames that capture the essence of the situation. 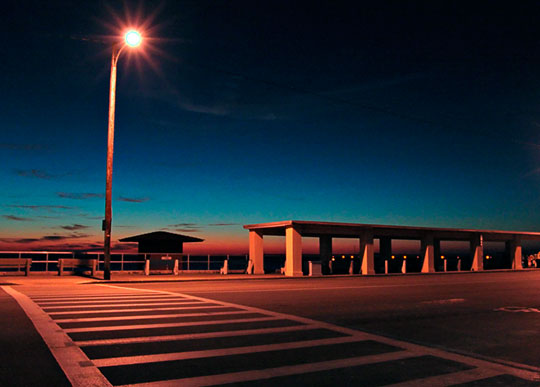 In late January, 2004 I found myself in south Florida on a mission unrelated to either photography or vacationing. But since photography is what I "do", I steal whatever time I can to practice my craft. It was sunrise on a Sunday morning and I walked from my hotel to a municipal pier — a favourite early morning spot of fisherman, and locals who wish to watch an Atlantic dawn. 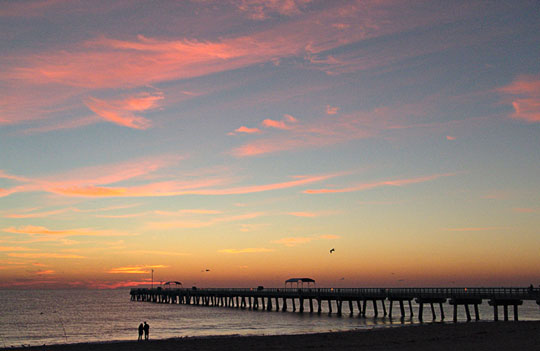 As I photographed I noticed another photographer working the scene. Like me he walked around the pier area taking his photographs. Once the sun had risen and it was time to head back to the hotel for coffee our paths crossed and we chatted for a few minutes. I’d noticed that he’d not been shooting very much, and so I asked him how he’d made out. "Not great," he said. "I only took a few shots because not much was happening." 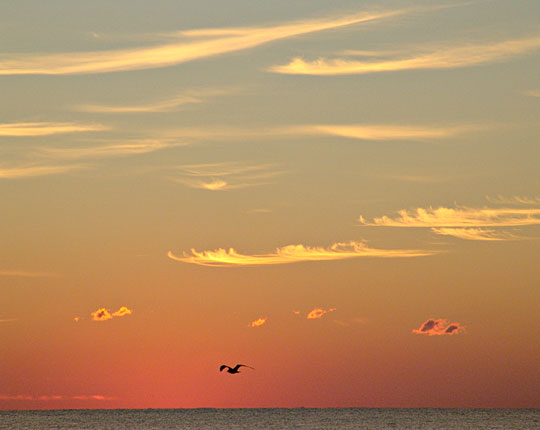 During the 60 minutes that I’d been out shooting I had taken 130 frames. Of these about a half dozen were worthwhile. Not "great", but certainly worth printing and enjoying. As I walked about I saw a great deal happening — a loving young couple admiring the beauty of the sunrise — the drama of the long shadows cast by the pier as the rising sun back-lit them — the instant before the sun broke the horizon when the clouds, sky, birds and ocean shared the pre-dawn silence. The mysterious illumination of a deserted crosswalk before first-light. 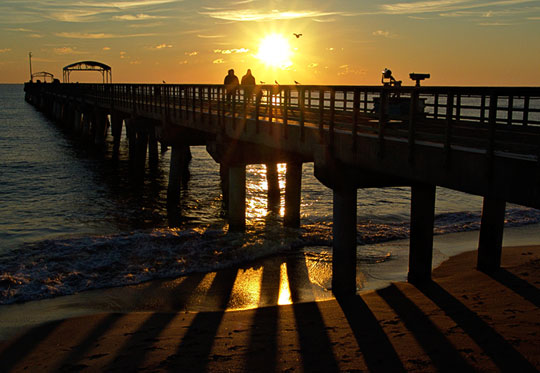 Nothing much happened? Sorry my friend, but so much was happening that at the end of an hour I was not only exhilarated, but also almost exhausted with the intensity. Indeed, this is one of the reasons that I photograph — not, as one photographer put it, "to find out what I’ve seen", but rather"to be more fully in the moment" — to experience what there is to see and feel all the more intensely. And to do so means not being passive and waiting for something to happen, but rather to be an active participant; looking, thinking, and feeling the moments as they happen — and capturing them. This means not being afraid to make mistakes; not fearing to "waste" film or bits.

Then, if you do this long enough, and often enough, and intently enough, worthwhile images can emerge.

The photographs in this essay were taken with theSony F828,
an 8 megapixel digicam released in December, 2003.
My review of this camera, in three parts, beginshere.

s Please use your browser's BACK button to return to the page that brought you here.