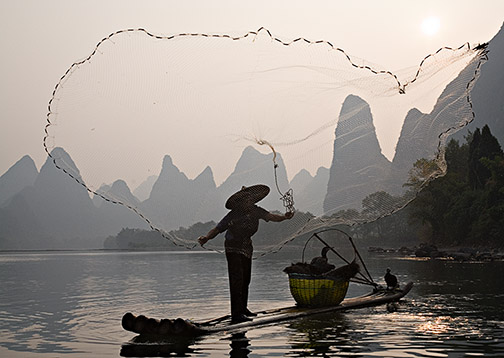 To landscape photographers the American southwest is the spiritual homeland. Yosemite, Arches and Zion National Parks figure among the archetypes. Beginning with the photographers of the 19th Century, and enshrined by Ansel Adams and his acolytes and imitators during the second half of the 20th Century, the national parks, deserts, and mountains of California, Nevada, Utah and Arizona have been the favoured destinations and prime subjects of legions of American landscape photographers.

But while contemporary fine-art landscape photography has its heart and greatest number of practitioners in America, there are other schools, and other venues. The world is a very large place, and America obviously has no monopoly on compelling landscapes. In this respect China and Japan stand apart, with equal fascination and rich histories.

Though in the West we see little of either historical or contemporary Chinese landscape photography, there is a rich history of Chinese landscape painting that is accessible though books and traveling exhibits. Through these, as well as an occasional visit over the years to art galleries and museums in Hong Kong and Tokyo, I became enamoured of the style of landscape painting and photography from these countries, and increasingly saw similarities between their esthetic and my own evolving style of working. It therefore increasingly became a desire of mine to visit some of the more famous locations in China. These included Guilin, famed for its gently weathered karst limestone hills, and Huangshan – the Yellow Mountains – instantly recognizable by their craggy and misty vistas, so often seen in classic Chinese paintings and pen and ink drawings.

Though China has been a popular and reasonably accessible place for westerners to visit for the past two decades, it is such a vast country, and appropriate tourist infrastructure so limited outside of the more popular spots, that Western photographers have barely scratched the surface of China.

In early 2005, I decided it was time to remedy this, at least insofar as my own work was concerned. To make the logistics work, and at the urging of several of my previous workshop participants, I also decided to turn the trip intoan expedition/workshop, with a maximum of 12 members.

Knowing no Mandarin, and with only a sketchy sense of the country’s geography, I knew I needed to enlist some help – calling upon the experience and contacts of a professional photographer familiar with the country. This had worked very successfully for me on previous travels, including in Bangladesh, Iceland and Tanzania, in recent years. For China I found an ideal photographic companion inPaul Elson, a New York based photographer with extensive shooting experience in China, along with his wife Jasmine, who speaks fluent Mandarin and Cantonese.

Paul has good connections with theChinese Artistic Photographers Society, that county’s largest photographic group, with more than 4 million members. In fact when they heard that Paul and I were planning on doing a small photographic expedition,Mr. Liu Lea, the society’s Chairman, became personally involved in helping us plan our adventure, and he joined us for the first half of our journey in Guilin.Mr. Sau Yalun, the society’s Vice Chairman, accompanied us for the second half, when we were in Huangshan and Shanghai. Their involvement was of huge benefit in finessing the ever-present Chinese bureaucracy, and along with Jasmine’s language skills and tenacious attitude, helped overcome every obstacle that China threw at us. These included truculent customs guards, stubborn bus drivers, and hoteliers who decided at the last minute not to honour pre-paid hotel reservations made months beforehand. 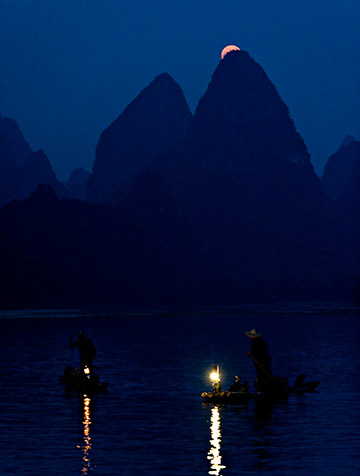 Just a short flight from Hong Kong, Guilin is one of the most popular tourist spots in China, visited by millions of people a year. The limestone hills in the region have a look almost unique in the world. The only other place with anything similar is in Vietnam, and on not nearly as large a scale.

The Li River runs though these hills and is the "highway" from which to see them. Literally hundreds of large and crowded tour boats ply the river each day.

From a photographers point of view the best time to shoot such landscape is early and late in the day. To make this work for us, and to avoid the crowds, we hired a small boat of our own, waking up at 4am in order to be at the right spot for sunrise. We had scouted the river in this boat the day before, doing a sunset shoot.

In addition to the natural beauty of the river, the other "feature" of the Li River are the traditional fisherman in their small boats, who work at night with lanterns on their boats, using tethered Cormorants to catch their fish.

Photographs of them against this unique landscape are both picturesque and archetypal. They are also, I’m forced to say, in some ways fake. These fisherman work at night, not during daylight hours. Any photograph that you see of these fisherman also showing the landscape, and not done with flash, are therefore in some way set up.

Consequently we hired several fisherman, their boats, lanterns and cormorants, to work with us in setting up our shots. These are not actors. These are real fisherman, moonlighting if you will, and likely making more money from this outing than they would from a night’s fishing.

Now I know that some people will regard this as something of a cheat. So be it. But I don’t see it that way. Good photographs sometimes fall into ones lap. In the case of street and documentary shooting, this is always the case. But landscape and nature photographers almost always plan their shoots according to the time of year, seasons, weather, sun and moon positions, animal migration patterns, and the like. Making sure that all of the pieces are properly in place is part of the game.

For example, you’ll notice the full moon in the photograph immediately above. This was no accident. Our entire trip was scheduled to coincide with the full moon during the third week of October, 2005. This is something that I frequently make part of my shooting schedule, and if there’s no compelling reason not to schedule a shoot around the time of a full moon I always try and do so. Consequently people sometimes will comment on how lucky I was to have the moon in just the right place. Well, no. No luck was involved (other than weather). In the case of the shot above it took three months of planning, and scouting the location the day before with a GPS and ephemeris tables to pinpoint exactly when and where the moon would be located. 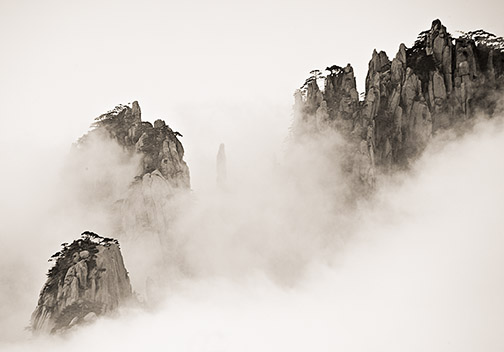 I’m sure that at one time or another almost everyone has seen the iconic images of theYellow Mountainsof China, even if they weren’t aware of their name or location. Huangshan mountain, is, like Guilin, one of the most popular tourist areas in China. But it has only been so for about the past 20 years. Prior to 1975 the only way into this mountain fastness was by hiking arduous footpaths, and its only inhabitants isolated monks and hermits.

But today there are cable cars which carry visitors by the thousands each day to the several hotels that are scattered about the mountain tops. Once up there there are no vehicles of any kind. The only means of transport is by foot, along narrow but well maintained foot paths. There are porters available (not cheap) who will carry your bags from the cable car station to your hotel, and who actually carry all of the food and other consumables up and down the mountain.

The trails are immaculately maintained. Sometimes on a remote part of a trail, after not seeing anyone for an hour, it is not uncommon to encounter a sweeper with his wooden whisk clearing the path of leaves. The Chinese take the maintenance of thisWorld Heritagesite very seriously. And, as for the tourists, just as in the US’s national parks, once you get away from the major lookout points by just a few hundred meters, the trails become almost deserted. But, at the famous lookouts, even at dawn, you’d sometimes think that all 1.4 Billion Chinese had decided to share the sunrise with you. 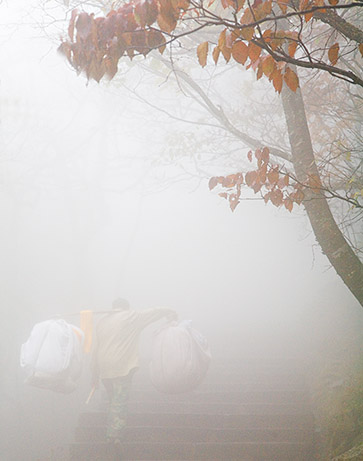 In the US I am almost always the only person on a remote mountain vantage point at dawn. At Huangshan we had to arrive at least an hour before first light to find a spot on a popular vantage point, the eager tourists (not necessarily photographers) were so numerous.

Speaking of tourists – at both Guilin and Huangshan we saw fairly few Westerners. Maybe 5% of the total number of tourists, most of whom were either Chinese, Korean or Vietnamese. Remember, with nearly one and half billion citizens, China has a huge middle class – possibly as big as that of the US or Europe – and growing. And they love to travel.

An observation about their photographic habits. As you might expect virtually every single person at Huangshan was carrying a camera, and nearly 100% of these were digital. Not that I paid close attention, but the most popular digicam seemed to be the Sony F828. A disproportionate number of people were using this particular model. There were as well the usual number of DSLRs, much as you’d see in any group of tourists, but few other than our group were serious enough about their shooting to carry tripods. Indeed, our tripods garnered as much attention as the fact that we were Westerners. Curious.

A Special Word of Thanks

I would like to thank theChinese Artistic Photographic Society, and especiallyMr. Liu Leathe society’s Chairman, andMr. Sau Yalun, its Vice Chairman, for their hospitality as well as extraordinary efforts in ensuring the success of our adventure.

Thanks are due as well toJasmine and Paul Elson, without whose familiarity with the country and language, this expedition would not have been possible.

The center of Garfield Mountain is hollow, a steep sided bowl with a rim like jagged dragon's teeth. North, a narrow cleft drains the bowl.