Thinking Out The End Result

A few weeks ago I was in Chicago for the weekend to teach a workshop with Jeff Schewe.  The workshop was all day Sunday.  On Saturday though I joined up with LuLa videographer Michael Durr and we did an early morning Chicago walkabout.  I’ll have a whole article on the walkabout coming up.  But, first I wanted to share part of that walk and talk about how I photographed the famous Chicago Bean.

The bean is a famous Chicago landmark otherwise known as Cloud Gate is a public sculpture by Indian-born British artist Sir Anish Kapoor.  I don’t know any photographer who doesn’t enjoy photographing the bean.  It offers an infinite number of possibilities of interesting photos.  I have photographed this iconic location many times.  Chicago is by far one of my favorite cities to photograph in.  This location is always a good place to start out my photo walkabouts.

Since I photographed this location before I knew the best time to shoot the Bean was at dawn.  The location during the day is jammed with tourists.  When Michael and I arrived we were the only ones there except for one other photographer.  This photographer just happened to be a photographer from the UK and recognized us and is a LuLa subscriber.

I went into this portion of our morning walk with an idea of what I wanted.  My goal was to shoot the Bean from several angles.  I would then use post-processing techniques in Capture one to add a very dramatic separation of the Bean from the rest of the photo.  In addition, I would straighten the perspective of the falling back look of the buildings in the photo.  I have a real thing of looking at a building shot with wide angles lens that feels like it is falling backward.  Tools in both Lightroom and Capture One allow this to be so easily corrected. Above is the before and after of Bean 1.  when I shot this I knew I wanted it to be Black & White.  I also knew I wanted it to glow bright and become almost alien looking. I shot this straight into the sun and the sun eas blocked by the bean.  I decided on this image, correcting perspective was not what I needed. I used Capture One for all the processing of these images.  You could do the same with Lightroom but as many of you know Capture One is my go to RAW Processor. My first step was to adjust the exposure sliders and then draw a mask on the bean itself.

Drawing the mask was pretty easy.  I created a layer and then using the brush set a width and feathers that worked for me.  I also set the flow to 100% and used auto masking.  I went around the Bean’s edges and kept the inner circle on the edge of the bean.  I used short strokes and then auto mask would define the edge.  I some cases where the mask didn’t kick in properly I switched to the eraser tool and using the same setting went in and erased the area that was outside of the Bean.  A lot of the time the eraser tool with auto-mask selected will do the trick.  If it doesn’t you need to decrease the size of the brush and just erase any areas right up to the edge.  It doesn’t take much time.  After doing the outside of the bean you can do an auto-fill of the mask from the masking tool pull-down in the sidebar.

I then created a new layer and then duplicated the first layer (copy Mask From . . .) and then selected Invert Mask.  This now gave me two layers that I could use to brighten the bean and darken the background.

Now that I had both masks created I selected the background mask and dropped exposure until the image had a much darker background.  Then I selected the first mask of the Bean itself and increased the exposure just a bit.  Color saturation and contrast were pushed just a bit too so that when I converted to B&W I would have the desired almost ghostly effect.

In Capture One I cloned the variant so I would have a duplicate file with all the adjustments.  I then went to the color tab and selected the Black and White tool and checked the box.  The image converted to BW. I then used primarily the blue slider to darken the sky.

I had envisioned this image as a BW with this kind of look.  My overall goal with all the images was to create a photo of an iconic location like the bean and make it different than the thousands of others taken of it.

For this shot, I wanted to create something that would make a viewer stop and try to figure the image out.  The Bean plays with you.  When you stand next to it, it literally reflects you in an infinite variety of ways.  I knew from past visits that I wanted to create a BW image of the reflection and that I needed to lie on my back at the very center of the bean.

You can see me there with my camera bag next to me. I then waited for someone to walk into the image like you see in the bottom of the photo.  The end result is an almost hypnotic image.

Once again I used Capture One and did my basic adjustments on the color image.  Contrast and exposure were the slider I used primarily.  I then cloned the variant and switched it to BW mode.  I used primarily the yellow slider to lighten the color of concrete and make it whiter.  You can easily see the effect of using color slider to adjust the tonality.  It’s pretty cool and a lot of fun. All the images in this article were taken with the Fuji X-H1.  I also used for all three images the 10-24mm wide angle zoom.  Of course, using this wide angle lens like any wide angle will introduce a perspective distortion.  Because I knew I had the perspective correction tool in Capture One I was not concerned knowing I could correct the images from looking like they were falling backward.  So, I took the tool which gives you two lines on either side of the image.  I lined them up along the straight edges of the building and then selected apply.  As you can see the perspective was corrected quite nicely. As I did with the Bean 1 image I made two different masks and the adjusted each to my liking density and color wise.  Capture One makes it very easy to do these adjustments and it only took minutes to draw one mask adjust it and the copy and invert it.  I  like the result as seen below.  This is kind of a 3/4 view shot.  The next image was a carefully aligned direct side shot.

This is one of the images of the four I like best. It’s a direct side view of the bean with buildings in the background.  The first thing I did was correct the perspective of the image using Capture One’s perspective correction tool. I placed the Fuji X-H1 on the ground for this shot and used the cracks on the sidewalk to lead the eye into the bean. Once again I wanted to darken the background and lighten the Bean to give it drama and separation. 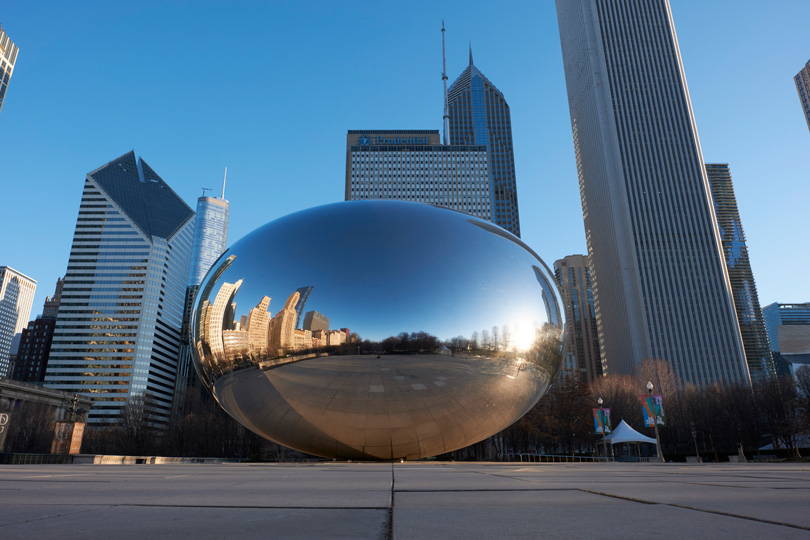 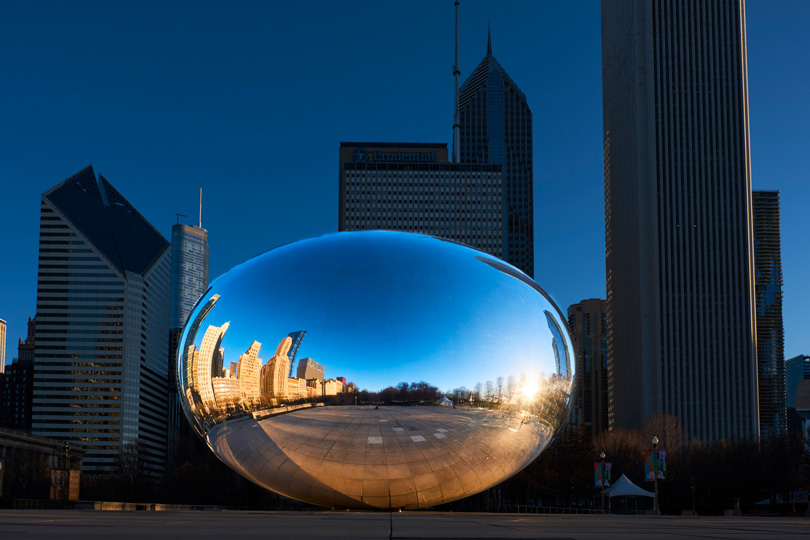 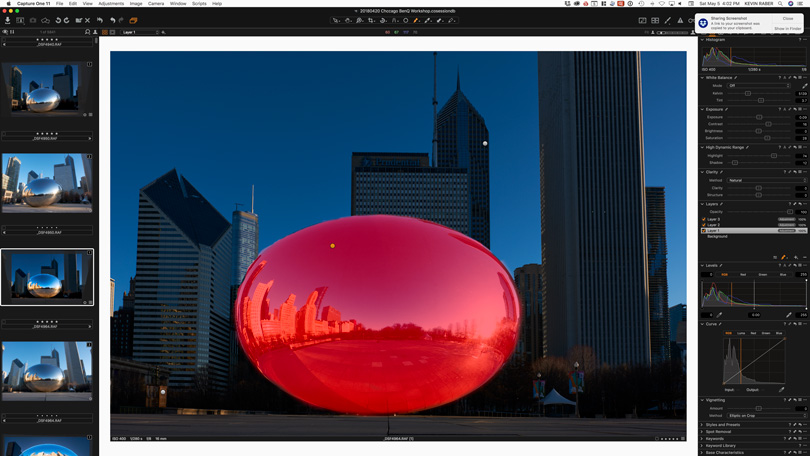 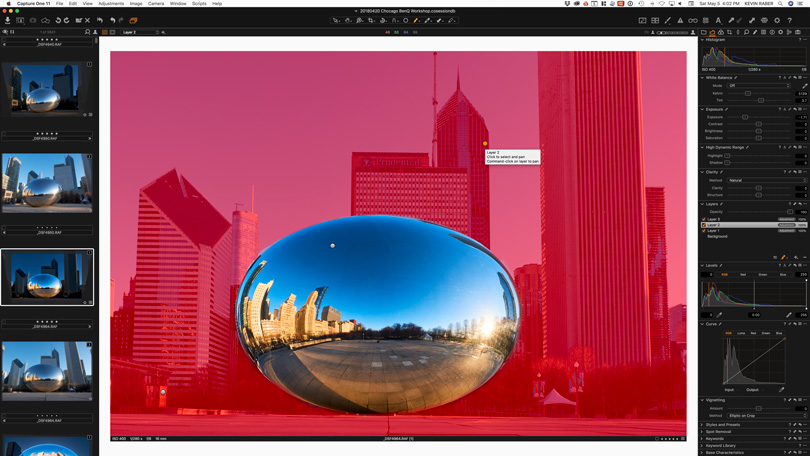 I pretty much used the same procedure as I did for the other images above.

In today’s world, it is hard to make your images look different from others.  Everyone is taking photos be it with a mobile phone or a higher end camera.  Differentiation is getting harder and harder.  This is even truer when it comes to landscape photography at iconic locations.  Maybe that’s why I enjoy going to such remote locations with what I term dynamic landscapes.  This means I can photograph icebergs, oceans, and landscapes such as found in the Palouse that will be different in a week.

With the Four Beans, I was able to get a different look for the Bean than I have seen elsewhere.  As the artist, this is my interpretation and like all things, there will be those that like it and those that don’t.  I especially like the Bean 1 BW image.  It has its own glow and looks like it was almost an alien ship landing in the plaza.

The shooting part of this was fun, especially because I had pre-visualized how I wanted to see the photos prior to shooting the shot.  I had even more fun in the post process part using Capture One.  It’s great that we have such tools available to us.

I hope you take a moment when approaching a well-known location and consider what can be done to make your image look different.