The Leica M8 in Antarctica

All of man’s forays into Antarctica have an element of romantic folly.   My own folly as a traveller on Michael’s recentAntarctic Questwas bringing my Leica M8.  Still being in the first-flush of infatuation with this camera when the departure date rolled around, I disregarded common sense and stuck it in my shoulder-bag, along with a coterie of lenses, comprised of the CV15, 28 and 90 and Leica 35 and 50mm Summicrons.  The fact that all this gear took up less than half of my carry-on “personal items” confirmed what a superb travel camera the M8 really is.

From Tangos to Icebergs

Argentina is the most convenient gateway to the Antarctic, so the first stop on our journey was Buenos Aires. In the height of summer heat, with temperatures touching 40 degrees centigrade, this teeming metropolis of more than 14 million inhabitants was a diametric contrast to the wonderland of barren ice awaiting us to the south.  In this environment, the M8 shone. Discreet enough to avoid excessive attention and small enough to carry without a large bag, it was both comfortable and functional.

Performance in the Field

Consistent with Michael’s experience in Marrakech, the colour, detail and dynamic range the M8 captured were outstanding.  While wandering the beach in Carcass Island in the Falklands, I came across a tableau of flotsam which cried out for a Leica-sharp rendition.  The M8 did not disappoint.  Scroll over the full-size jpeg for a 100% view.  I would not hesitate to make a very large print of this image, and am quite confident that it matches in detail anything any 35mm DSLR could produce. 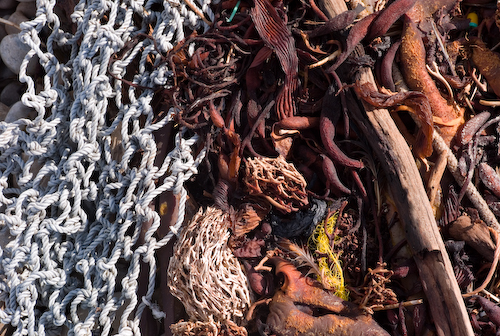 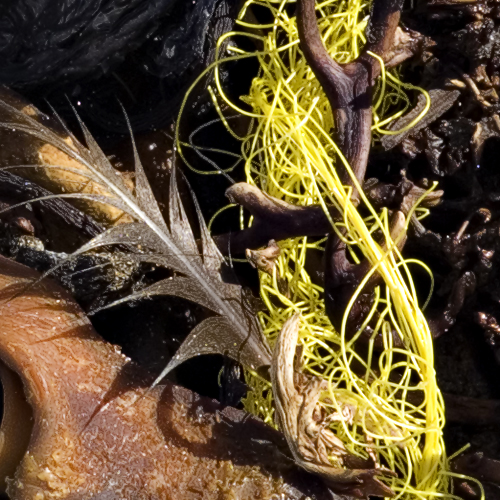 A Bird out of Water?

While I love rangefinder cameras (and very nearly brought my Fuji 6×9 on this trip), I will be the first to admit that RFs are not well suited to shooting wildlife and landscapes, especially from moving platforms, such as our ship and the Zodiacs which carried us ashore and amongst the icebergs.  The versatility of long, autofocus zoom lenses is undeniable in the Antarctic.  This really is DSLR territory.  That said, I often carried the M8 with the CV 15 (a 21mm equivalent) attached as my wide-angle camera, while a 70-200 or 400mm lens rode alongside on my trusty EOS-1Ds MkII. 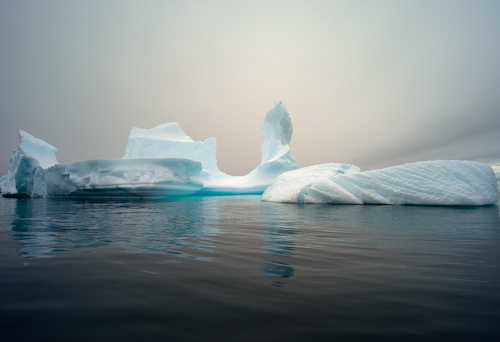 AsIce Palacedemonstrates, the M8 is capable of capturing luscious tone and detail. The Auto white balance was madly off in all directions, but I couldn’t care less since the exact rendering of the RAW file is an artistic control I do not ceded to my camera or a grey-card.  The colours in this image are very close to we saw, and even closer to what we experienced.  There is no “Photoshop Magic” going on here, or indeed in any of the images in this review.

The two greatest challenges with the M8 were focussing and framing. Ever try to focus a rangefinder patch on pure ice from a bobbing Zodiac?  Similarly, the frame lines in the M8 proved to be less accurate than hoped, leaving my constantly chimping and re-shooting after cutting-off a desired part of the subject.  Because so much of Antarctica’s visual appeal lies in the strong graphic quality of its snow, ice and rock, the looser framing of the M8 becomes a liability in shooting landscapes.

Of course, the M8 is up to the task of producing top-quality images if you’ve mounted the right lens, and know your tool well enough, as the shot below shows.  In general, however, the run-and-gun style of shooting necessitated by the near constant movement of our shooting position or our subjects hampered the M8’s effectiveness.

Wildlife and the M8

There are few places in the world where you can get close enough to wild animals to make great photos with wide-angle lenses.  South Georgia is one of those places.  I shot several of my favourite images there with the CV15 on the M8. I found that showing the context in which these amazing creatures lived – namely the dramatic topography of mountains, glaciers and oceans which comprises South Georgia – became my chief artistic aim.  The M8 with the CV15mm proved ideal for this.  And yes, the King Penguins standing 2-3 feet away from me reacted much less to the raising of the Leica and its purring clicks than to the sight of my EOS-1Ds, armed with a large “L” series zoom and its machine-gun shutter.

My second most used lens was the 50mm f2, which functions as a short-telephoto on the M8.  In instances such asWalking to Work, below, I really enjoyed being able to compose a smaller scene from the broader view through the finder. 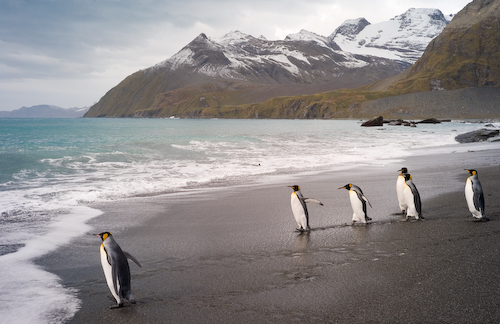 The CV 90mm f3.5 also saw a fair bit of use on this trip.  The addition of a 1.25x magnifier on the M8 increased focussing accuracy to an acceptable level – though many shots still came-up less than tack-sharp due to focussing error. Storms over Iceberg Fieldis one of my favourite images from the trip, and was taken with this combination. 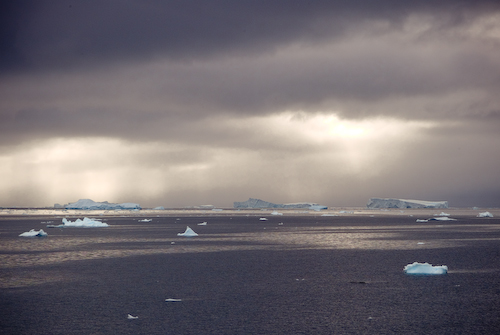 On three occasions, my M8 simply stopped working when I turned it on.  The battery was reasonably fresh on each occasion, but the camera would come to life when my fully-charged backup battery was substituted.  The battery which had been in the camera at the time of the crash required a full re-charging to function again.  It is unclear whether this was a phenomenon is a battery, charger or camera problem, but I couldn’t care less since it cost me a shot on each occasion.

The higher cost, however, was the loss of confidence these failures engendered.  The M8 largely lost its shore-privileges after the second incident of ‘narcolepsy’.  A camera only gets to die and fail to capture a really nice image once or twice before you stop trusting it.  I really expect more from Leica.  It’s a testament to the camera’s other excellent qualities that I remain willing to put-up with this sub-standard nonsense.

In fairness, the M8 captured a rainbow over the tussock grasses of the Falklands during a light rainstorm which laid-low a number of EOS cameras. It also endured a sand storm as well or better than my EOS lenses, showing that the camera does not lack in ruggedness, but rather lags in electronic reliability.  Then again, I would never have taken it out in the driving rain which my EOS-1Ds endured under the shelter of a soaked towel. 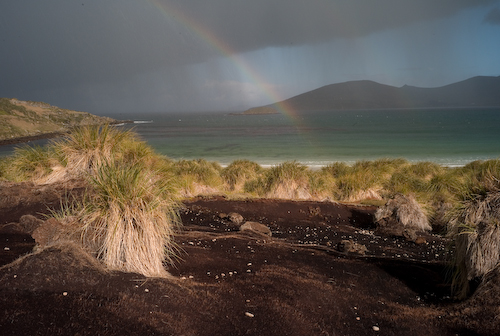 Would I take the M8 back to Antarctica? The answer is: only as a compliment to a full DSLR system.  To anthropomorphize a little (something one does alotwhen you’ve spent time around penguins), the M8 has the character of an urbane, and eccentric philosopher. It can endure a voyage to the last wilderness and yield many interesting and beautiful insights, but its true habitat is on the streets of human habitation.

It was folly to take the M8 to Antarctica, but the fruits of that folly will grace the walls of my home for many years to come. 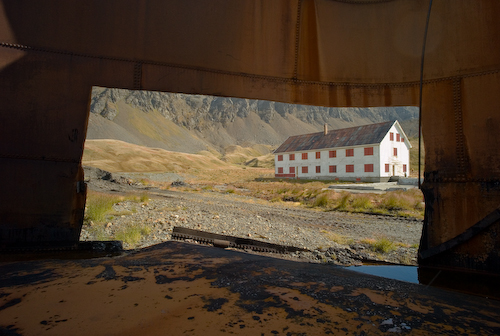 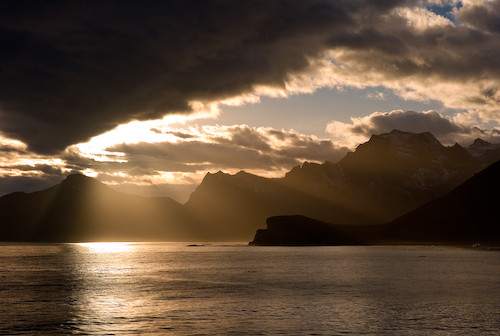 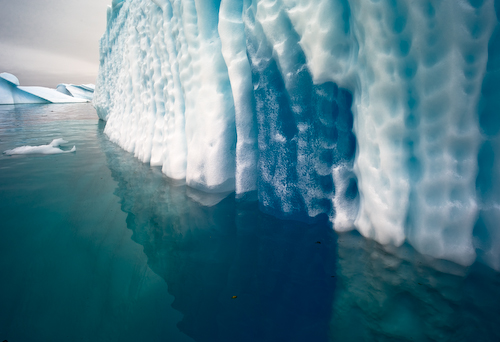 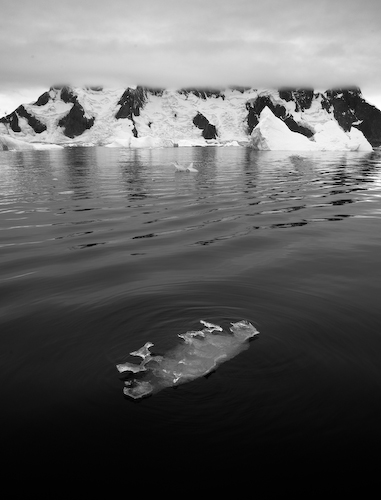 For another perspective on NOT shooting with an M8 in Antarctica, you may wish to read my companion piece to this article titledThe Leica M8 atThe Cemetario de la Recoleta.

Life and Times Of Mark Stothard

Publisher’s NoteOnce in a while you meet an individual that has an endless amount of energy and drive. Mark is that kind of individual. I

In the evolution of design, all we can be sure of is that new designs represent the additionof something unfamiliar to something that is already