The Problem With Photographing the Beautiful and The Famous

Whether your idea of beautiful is the latest hot actress or Half Dome in Yosesmite, there is a problem inherent in photographing them – how do you ever compete with the real thing? let me illustrate: 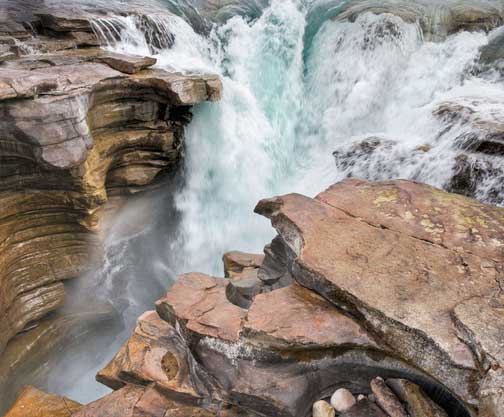 Athabasca Falls 2007- photographed by holding my tripod out over the falls for a view not available to tourists.

Let’s take a hypothetical example from my own experience. I’m standing at Athabasca Falls, Jasper National Park, Alberta. The water is thundering, there’s a fine spray in the air that wafts over to me as I lean over the railing to admire the falls. The water is a beautiful blue/green where it isn’t churning white. It’s Fall and the air is sharp, cool and fresh. I can smell the spruce trees. The moss is an iridescent green and in the distance are bright yellow aspens.

All very nice you say, but what’s the point? Well, I personally know of no way to put all of that into a photograph so effectively that I could ever imagine saying, “forget the falls, give me the photograph”. But if that’s the case, what’s the point of trying to take photographs of scenic locations like this? Sure, they bring back fond memories. They let others know of our experience (sort of, in a pale, faded way), they make nice calendar pictures. But as a work of art? It’s fine if the purpose of the photograph is to let people who cannot be there see the Falls at their best. All but a tiny fraction of us will never get close to a famous actress and a photograph is as good as it’s going to get.

But the truth is, a photograph of these icons can never come close to experiencing the real thing, and so we must give some thought as to how to approach these subjects. Those of us with gray hair will remember the “Is it live or is it Memorex” commercials and while that might work with sound, it most certainly doesn’t with live, moving, three dimensional subjects like the falls and the actress.

One option is simply to not tackle the beautiful. Of course, this certainly is not the direction that millions of tourists take, but for them, a “wish you were here” or “gee, I was here” is about all they need. What about the thousands of serious photographers, raised on Ansel Adams, who journey to Yosemite to worship at the tripod holes of “the great one”. Stories are told of how people who have seen Ansel’s images are often disappointed with the image making capabilities of the park (even if the park itself is beautiful). Surely there must be a way to tackle subjects that are intrinsically so great that one would think that any photograph must be a pale imitation of the real thing. 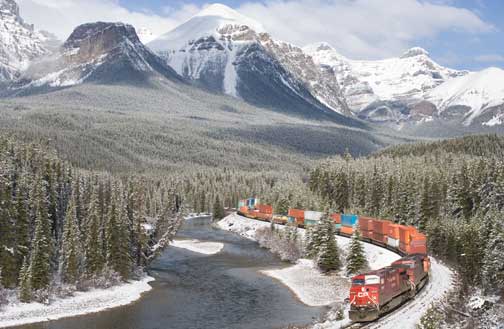 CP freight at Marrant’s Curve  May 2006, by the time the steam train came by the frost was off the trees.

Historically several strategies have been used:

1) Photograph the subject under exceptional circumstances. When applied to the landscape, this often means in fog or at first light, with incredible skies or awesome storms. The problem with this strategy is that it says more about your perseverance and willingness to get up very early, repeatedly, than it does about your photographic skills. Still, when effort and skill are combined, the combination can be truly beautiful and may well exceed, in it’s own way; being there, at lunch time, with other tourists, and nary a cloud in the sky. Magazines like “Arizona Highways” and many calendars feature work like this and there are some extremely talented photographers who over the years have produced some extraordinary work. Whether it’s the kind of thing you want to do will depend on your goals, resources (including time) and energy.

Griffith Park, Calgary 2008, in black and white the dappled light looks interesting instead of distracting.

2) Simply photographing in black and white is a viable strategy. It takes away from the comparison with the real thing, and significant manipulation of the image (whether with traditional dodging, burning, and bleaching) or the modern digital equivalents) can enhance the image and help elevate it to a work of art. Ansel Adams did it in the past, photographers like Bruce Barnbaum, John Sexton and many others do so today. It is entirely possible to create a work which exceeds the real thing in it’s own way, and explains the disappointment of those who try to imitate Ansel, and who can neither see an image nor create one to equal what he did.

3) The use of alternative processes further removes the tie between original and image. Whether it’s cyanotype or platinum print, gum bichromate or bromoil, the image in hand is clearly a work of art and not a snapshot. This explains their dominant placement in magazines and galleries, given how few people actually work in these media.

Takkakaw Falls, 2008, this is only the bottom quarter of the falls, seen through the mist it generates.

4 ) Instead of trying to capture several miles worth of grand landscape, move in and concentrate on the near and middle ground, distances measured in yards and meters instead of miles and kilometers. Elliott Porter was an early expert in this area with his colour work. Stephen Shore and Joel Myerowitz continue the strategy. Michael Kenna and David Plowden do likewise in black and white.

5) Somewhat related to shooting the near and middle ground is the strategy of photographing from unusual viewpoints or to photograph what people normally don’t see. Thus something grand will be broken into it’s parts and shown in detail that the average person can’t see. This can mean crawling, or photographing at night, or using long exposures. It means getting dirty and or wet and pushing through nettles and thorns. 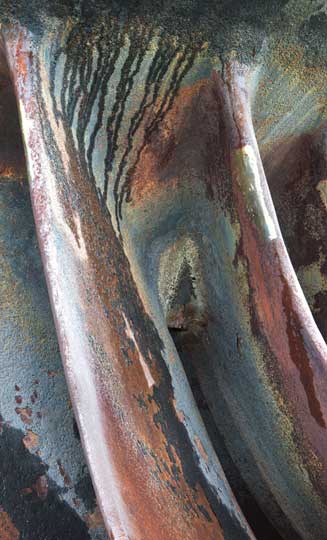 Turbine Blades 2008, from a distance a brown lump but move in and rainwater is trickling down, rust takes on texture and the shapes are revealed.

6) My own favourite is to find beauty in unexpected places – thus my fascination with industrial images, my walks down back alleys and creating abstract images from relatively small ares, measured in feet or inches. For me, there is a particular thrill in finding and or making something beautiful out of the very ordinary or downright ugly, from something that not only would the average person not notice, even if you pointed it out to them they’d not recognize the potential. I’m certainly not unique in this. There is the work of Shaun O’Boyle is in Lenswork 77, photographing Bethlehem Steel Works. I was first aware of Shaun’s work when he photographed an abandoned mental hospital. The gorgeous images of Per Volquartz made of fighter aircraft is another good example.

7) Some take this a step further and into the realm of macro. The recent work of Andy Ilachinski photographing an acrylic candle holder and producing images that look celestial is a good example (see Lenswork # 76) 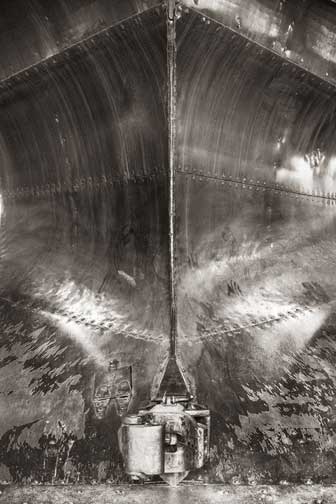 Snowplow 2008 – in colour the plow is bright red and tonalities are hidden.

Lest you conclude that the above only applies to landscape and industrial photography, let me site a few examples which suggest that the problem is universal and the solutions not so different.

The story is told of Karsh photographing Winston Churchill, that at the last second he pulled Churchill’s usual cigar from his hand, and captured the “how dare you” expression an instant later. This image goes a long way to explaining how Churchill could have led Britain through the darkest days of WW2. Had you a chance to lunch with Churchill, you might not have glimpsed that side of him. Even had you been standing in the studio at the time, you could easily have blinked and missed this classic and revealing moment.

Take another example, a network showing a football game. They can’t put you in the stands, with the smell of beer and popcorn, the noise of the crowd, or being jostled as the crowd stands to cheer. What they do instead is provide instant replays, slow motion, analysis and commentary. They provide telephoto views that you’d be hard pressed to get with binoculars.

When a still photographer wants to give you something that being at the game can’t, he typically puts on really long lenses and through much practice and with considerable skill, captures the peak moment of action, in a tight close up, sharply detailing everything from the sweat to the grip of the fingers on the ball, the concentration in the eye of the receiver and his grimace of determination. 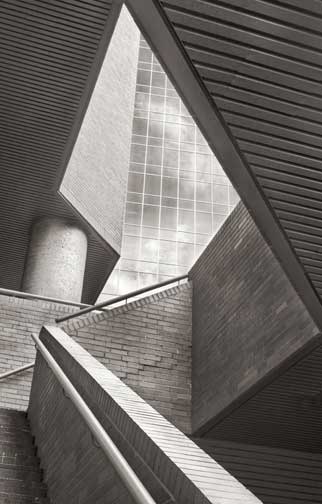 Steps 2008 – the parts are more interesting than the whole building.

So what does this mean for your photography? Well, perhaps you shouldn’t be putting so much effort into searching for the magnificent, because even if you find it, capturing it in a piece of paper 13 X 19 inches is none too easy.

If you do happen to be in front of the magnificent, you would do well to stop and think about strategies for working with the beautiful.

You might choose to stop searching for the grand and put your efforts into finding beauty in the parts or in the unexpected.

If you find yourself faced with something not only beautiful but downright cliche’ed, then your challenge is to see and show something new or different about the subject.

O.K., all this philosophizing is all very well, but give me the bottom line – what can you do when faced with the beautiful?

Ask yourself the following questions:

1) what could a photograph of this do/show/explain that being here doesn’t?

2) is there a way to capture the feeling that this situation brings to me?

3) how can I replace the third dimension, sound and touch with the visual?

5) What can I see/look for, that others untrained might not find?

6) Is there a way to manipulate the image beyond real to emphasize the independence of the fine print from the real subject?

It’s my belief that far more images fail to reach potential because of problems like the above than ever fail for technical reasons. Ansel said “there’s nothing worse than a sharp picture of a fuzzy concept”. Perhaps the ideas presented here will help you focus your concepts. 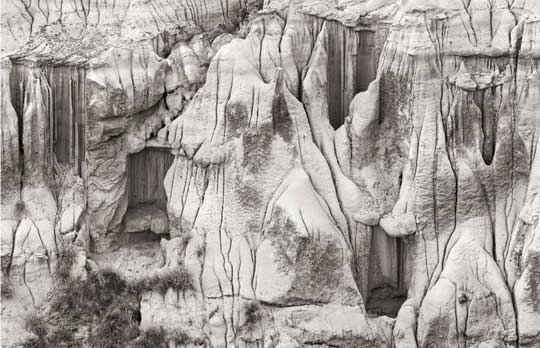