The Synthesis of Chinese Landscape Painting and Photography 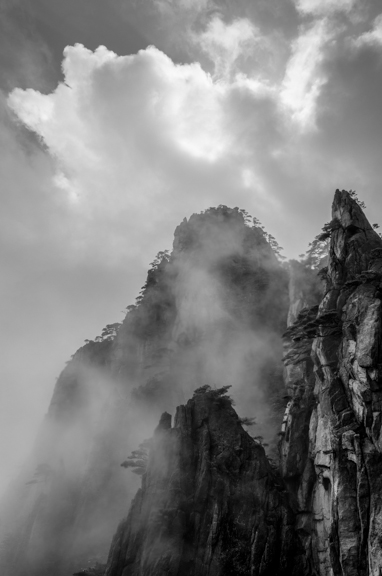 By George DeWolfe and Lydia Goetze

Traditional Chinese Landscape Painting has endured for almost 1500 years, longer than any genre in Western culture. What perceptual qualities (that we can see for ourselves) lie behind this? How can we adopt these to the medium of digital photography? Looking at the visual structure of paintings began for us as a way to analyze what makes a an image “work,” and it has grown into a fascination with a very different way of seeing – that of the classical Chinese Landscape painters.

In the spring of 1986 I was in the college library preparing some notes for a lecture. It was late at night and I was the only one there except for the librarian. At the other end of the long table where I sat was a large tattered book. Curiosity finally got the best of me and I went over and opened it. The title,The Tao of Painting, was intriguing to me, as I had read the ancient Tao Te Ching and understood that it was one of the sacred texts of the great religions. As I read the introduction and the first chapter a strange thing happened: I started to substitute the word photography for painting. Here, in my hands, was the story and technique of a group of artists who were trying to do the same thing I was struggling with – but 1500 years ago – with a stick of black ink, water, a brush, and paper.  But it wasn’t so much the technique that seemed similar, as the simple tools used to produce black and white images of the landscape and the inspiration these painters received from the Tao Te Ching. It was the paradigm shift I needed to accomplish the synthesis of surface visual perception and a deeper expression of the mysteries of nature accessed through awareness.

My first question was, “How did they come upon such strangely shaped mountains?” The answer turned out to be “by looking at the reality around them;” These mountains are for real. We have seen them at Huangshan, at Zhangjiajie, and in the Li River Valley. The men who painted these precipitous spires walked and lived among them and felt themselves to be an integral part of nature in a way that few Western painters or photographers have. They often lived (by necessity) very simply, as monks or hermits with few material possessions, in caves or simple mountain huts. They worked with monotone ink and an assortment of brushes on silk or paper.

The ancient Chinese landscape painters created an art that possesses amazing resilience to overcome the arbitrary movements with which Western art, including photography, is continually plagued. It is the longest living art genre in the world. It represents and unifies the human spirit, nature, and the universe. It was created with awareness, reflection, and silence. It is as true a form of expression as exists in the world, where art and spirit collide and become one.

When we analyze the visual structure of Chinese landscape painting, we notice several things that seem strange to us. The use of negative space derives its visual and spiritual importance from Taoist and Chan Buddhist philosophical traditions and from their skill in meditation as preparation for painting. The painter’s way of showing depth and distance in three vertical planes is radically different from the western idea of linear perspective along a horizontal plane.  The use of scrolls makes for tall vertical images or long horizontal images – these latter designed to be viewed as segments the width of a comfortable arm span.  Sometimes a painting contains multiple points of view. And, because the primary medium was India ink on silk or paper, these landscape were most often monochrome, black and white and many gray tones.

Emptiness is the principal theme in the Chinese aesthetic theory of art. The artist first calms the mind and allows it to become quiet and empty of thoughts and emotions –the age-old practice ofmindfulness. Into this quiet, empty mind flows inspiration and a sense of relationship among things in the world. This practice then allows the artist to paint with a calm hand and responsive brushstroke as though the wind had only blown that way before. It is an act of spontaneity and authenticity combined.

In photography (and painting), the foundation of all composition isNegative Space. It is the place where all secondary rules of composition are born. Understanding Negative Space thoroughly enables you to see both purely and authentically without the overlay of compositional rules. The best way we know to learn Negative Space is through Betty Edwards’ The New Drawing on the Right Side of the Brain. http://www.drawright.com. She explains and gives exercises in Negative Space in the workbook that accompanies the book. 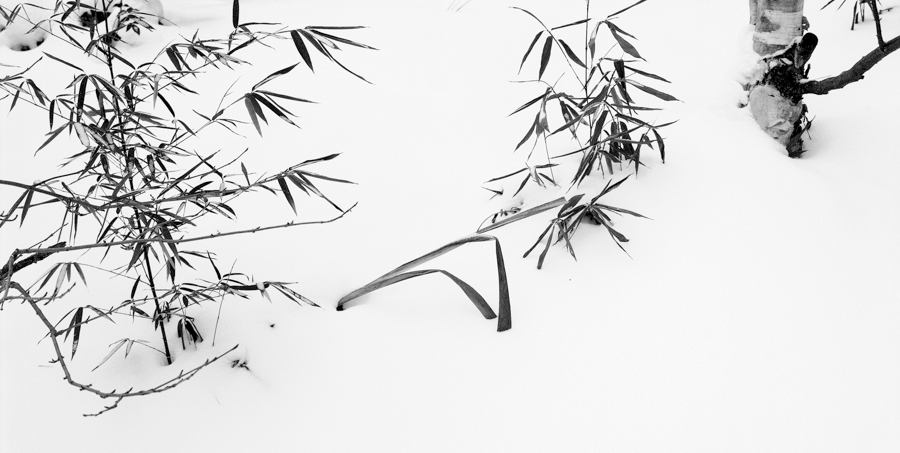 To represent depth, most Chinese landscape paintings contain three individual vertical planes, like three pictures hanging one in front of the other: Foreground, Middle Ground and Background. The foreground usually consists of “earthly bound” objects like people, animals, buildings, and forest. The middle plane often represents emptiness in the form of clouds, mist or water. The background plane often includes “heavenly” elements such as hills and mountains as well as sky. The Chinese landscape painters did not use perspective as we paint it in representational art (or see it via the one-point perspective lens of a camera), but instead showed depth with the three planes. In each one of these planes negative space – emptiness – plays a key compositional role. The flattened nature of most of these paintings can be roughly approximated by using a moderate telephoto lens to flatten optical perspective in combination with one of the three formats below. 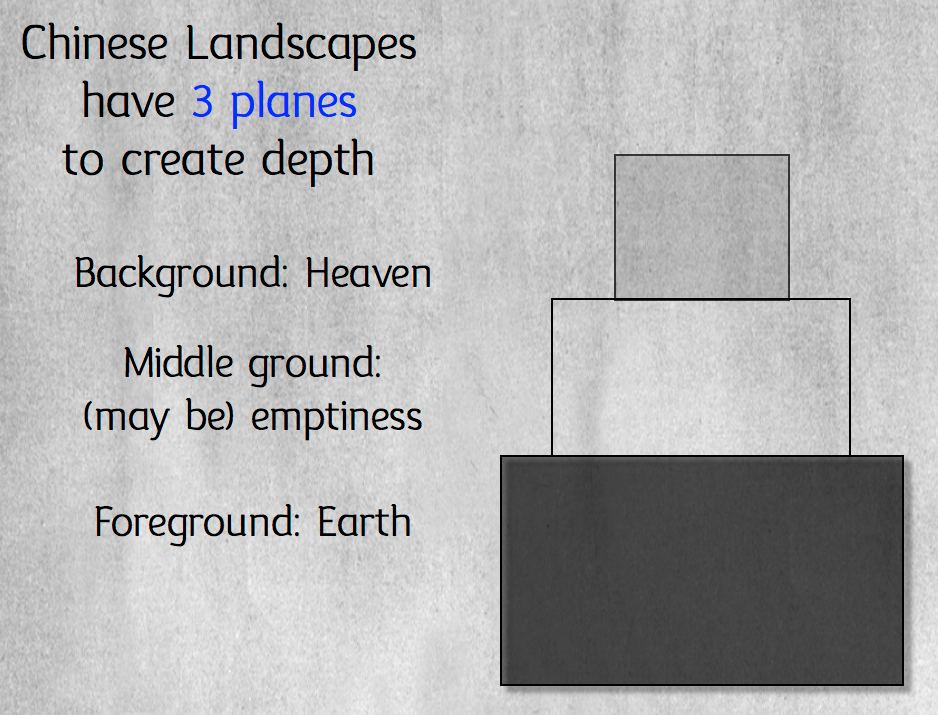 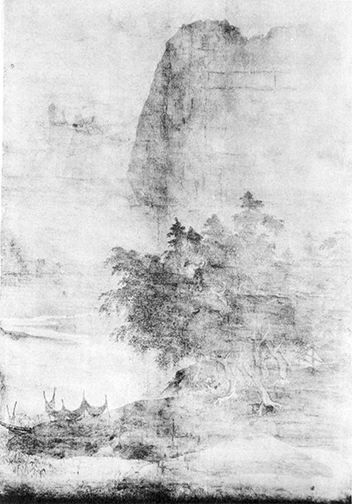 This is an abstract of a Chinese Painting showing the 3 Planes.

Image courtesy of The Museum of Fine Arts, Boston used by permission 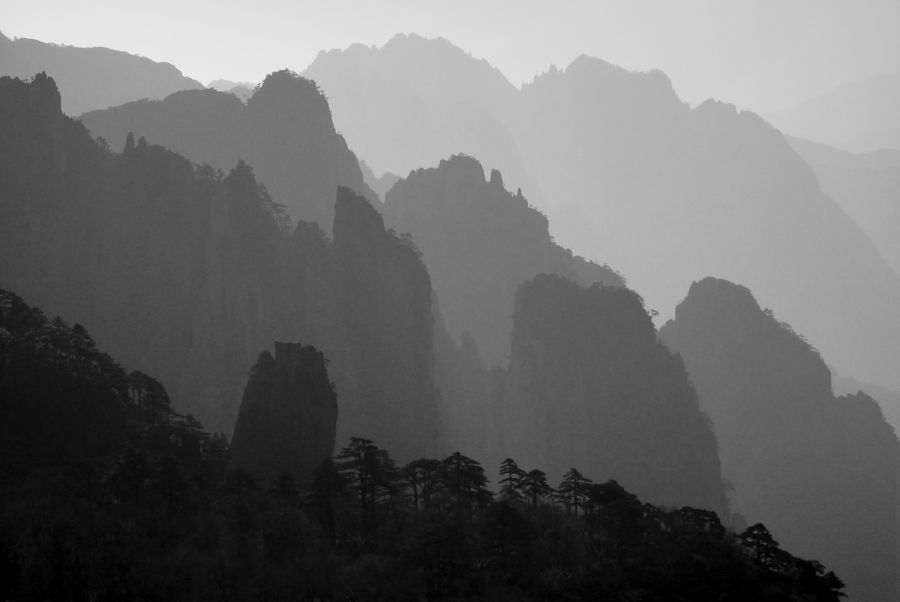 Huangshan, China 2006 Lydia Goetze
This one has more than three planes, but the idea is to get good Negative Space in all of the planes

Chinese landscape paintings had three general formats – Vertical scrolls, Horizontal hand scrolls, and square. The Vertical Scrolls were painted in long vertical sheets of silk or, later, on paper. The aspect ratios varied considerably, but the majority have a width:height ratio of about 1:2 and 1:3. Horizontal scrolls were sometimes very long (like very long panoramas) – some measured in tens of feet. The main idea of a horizontal scroll was to unravel time through a travel log or story. Each part of the visual story was painted at the width of a comfortable arm span. Square formats were usually simple compositions that employed emptiness and simplicity as hallmarks. Photographers can adjust their aspect ratio to mimic these ancient styles. 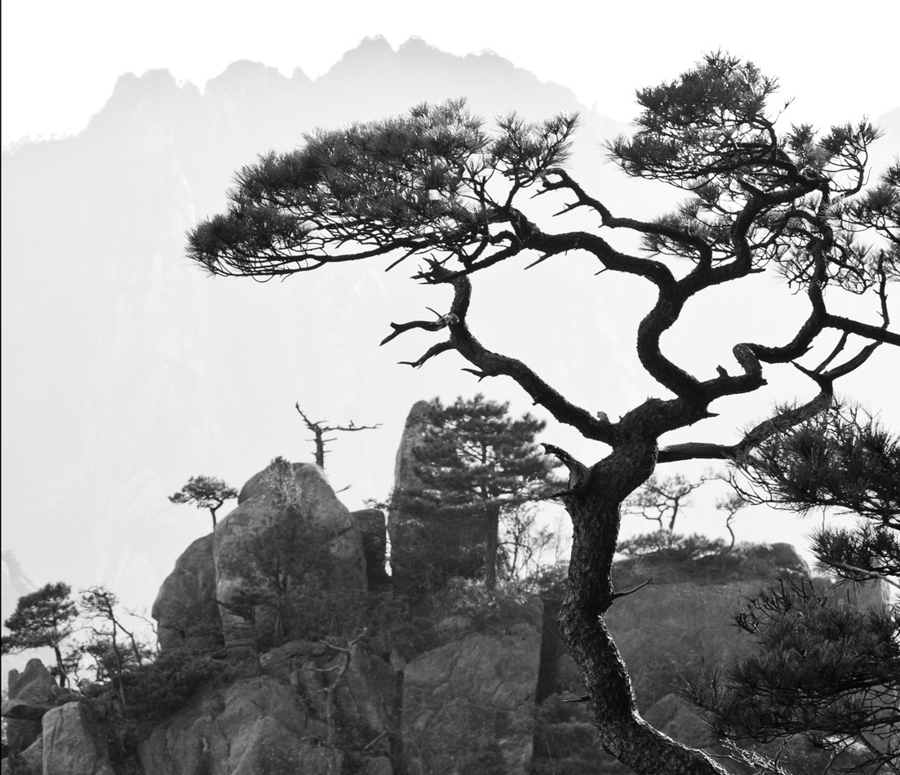 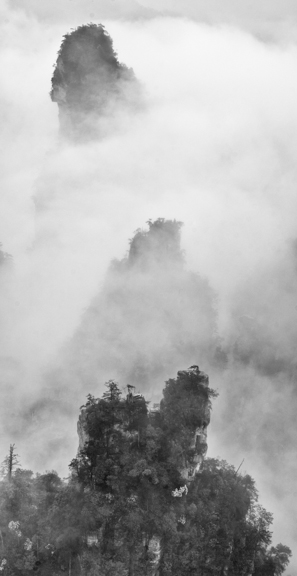 The ancient Chinese landscape painters used only black India ink, water, and brush. The terminology they used to describe the various kinds of diluted ink and brushstrokes numbered in the dozens – from wet to dry, from dark to light. Their ability to produce paintings of remarkably varied black and white tonal quality are equal to the finest charcoal drawings and black and white photographs. We are fortunate today to have such tools as Lightroom and Photoshop and nik Silver Efex Pro software to perform the B&W adjustments needed to mimic the tones of Chinese paintings. In addition, the ability to make excellent B&W prints with Epson printers and with drivers like ImagePrint and high quality paper from Hahnemühle and Epson, allows us to copy and continue the style of these ancient craftsmen. (See George’sarticle on B&W printing here onThe Luminous Landscape). 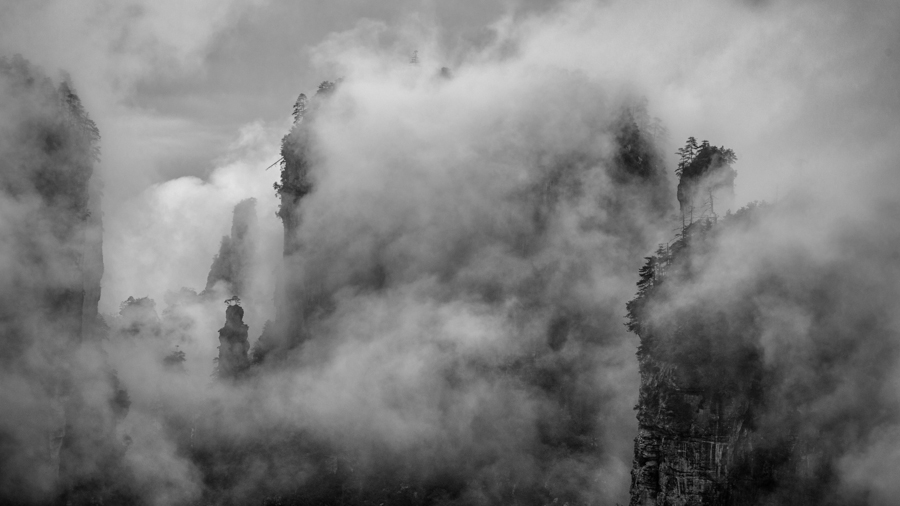 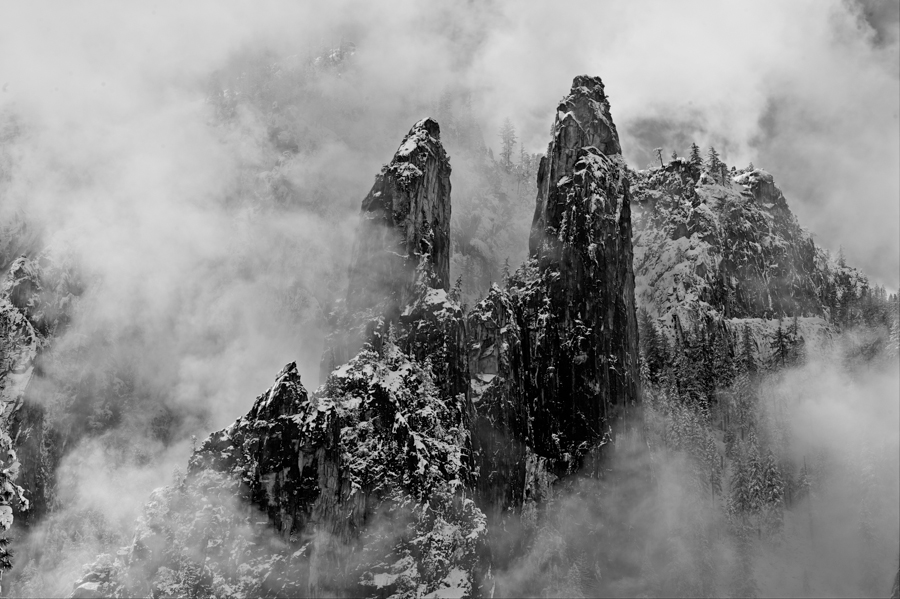 Both of these images seem the same, yet they were taken in entirely different places. The first was made in Zhangziajie, China, and
the one below it was a winter storm in Yosemite.  The techniques of Chinese Painting can be used anywhere.
both images by George DeWolfe

In Chinese painting, there is a long tradition of copying from the masters – not necessarily copying the image per se, but trying to re-capture and show its life-energy or Chi.  Like all creative artists, photographers, too, are open to new ways of seeing and to inspiration from a variety of other media.  Synthesizing the practice of mindfulness with the vision of the ancient Chinese landscape painters and using the tools of digital photography is at the heart of our workshops in China, in the mountains those painters knew and loved.  For more information, go to https://www.toursabroadchina.com. All images were made with a Nikon D7000 and various lenses.

See all articles by George DeWolfe

© 2010 William Neill excerpted from the ebook:William Neill's Yosemite: Volume One "Climb the mountains and get their good tidings. Nature's peace will flow into you