By early April, 2004 all five of the first-generation 8 Megapixel digicams fromSony,Minolta,Olympus,CanonandNikonhad started to ship, and had also crossed my desk for review. The links in the previous sentence are to my online reviews (and in one case non-review). 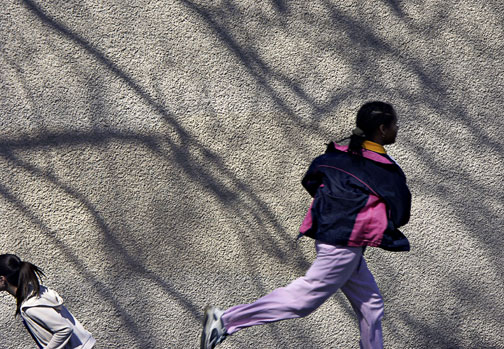 But Which One is The Best?

Of course the question that everyone wants to know, and which I receive countless e-mails asking, is — which one is the best? Since I know of no on-line or magazine reviewer that will provide you with a straightforward answer to this (and they’re probably wise not to), I’ll do my best to answer the question. You may not like the answers though.

The first thing that needs to be said is that in a typical shooting situation each of these cameras would produce comparable images. There is no dramatic difference between them in ordinary light and at low to moderate ISO settings. None of them do particularly well at ISO’s above 200. These cameras all use the same Sony-sourced CCD imaging chip, though each of course does their own unique image processing and has quite different lenses.

The real differences lie in the areas of handling, features, ergonomics and build quality. These are therefore the things that are discussed below. Bear in mind that these are subjective evaluations and that another reviewer or individual might have quite different opinions on at least some of these issues.

The Sony stand apart from the others by virtue of its unique design, lens, build quality and problems. If you’re a long-time photographer none of the other cameras will feel as good in ones hand as does the Sony. If you’re used to the size and weight of an SLR the F828 will fall to hand beautifully. But its quite a bit larger and heavier than any of its competitors.

The Sony’s lens has a similar range to some of the others (28-200mm equivalent) but is at least a full stop faster than any other, and in some cases two or more stops faster. For anyone shooting in low light levels by available light, and especially because high ISOs on all of these cameras is poor, this may be of importance. The Sony also has the most sophisticated focus-assist capability, with its infra-red holographic projection system and night focusing capability. It literally can focus and shoot in the dark.

The Sony has two major drawbacks. The first is that it suffers noticeably from purple fringing. This is seen on specular highlights and along edges where very light and dark areas meet. It is similar to chromatic aberration. None of the other cameras in this group display the problem as badly as does the Sony, (though most have it to some degree). Some people see it and find it bothersome much more than others. I shot several thousand frames with this camera on location in Africa and saw only a handful of images which were affected, but others may find it to be a bigger issue.

The other concern that I have is that the buffer is too small and too slow to allow for proper shooting of RAW images. Like some of its competitors the F828 freezes for a long time while a RAW file is written to disk. If you shoot only JPGs this is not an issue, but RAW files are the way to achieve maximum image quality, and therefore this really bothers me.

The Minolta A2 is the most feature-rich camera of the group. Indeed it may well be one of the most sophisticated and complex cameras ever produced. It has Anti-Shake, which provides 2-3 stops of hand-holding advantage, automatic switching between the electronic viewfinder (EVF) and the rear LCD, a three frame RAW buffer that can shoot up to 3 frames as fast as 2.7 frames per second, and a unique EVF that offers extremely high resolution.

For all its richness of capability it actually is very easy to use. The user interface is among the best that I have ever seen in a digicam. A bit of reading and familiarization, and controlling this complex product actually becomes straightforward and intuitive.

There are some drawbacks though. The A2 appears to have some quality control issues. It took three cameras until I finally got one that worked properly, and I have heard from a few early purchasers that they have had similar experiences. Also, the build quality and materials used are not at the high levels seen with the comparable Olympus and Sony cameras.

The Pro1 does most things quite well, but nothing exceptionally. It is well built and nicely designed. It is small, yet handles smoothly. It’s the middle child. Not so good so as to stand at the head of the class and not so poor as to draw attention to itself.

I usually dislike cameras with motorized zooms, but the Canon allows for manual control via a traditional zoom ring, and it works reasonably well, though not perfectly. There is a decent focus assist mechanism (though autofocus can be slow to lock on), and reasonable ergonomics. Along with the Minolta this is the only camera of the group that can shoot RAW without freezing after the first frame. It can shoot 5 RAW files in a row, but much more slowly than the Minolta, at less than 1 frame per second.

The biggest failing of the Pro1 in my view is that it is the only one of the five cameras being compared that does not offer a live histogram. As photographers become increasingly aware of the advantages of appropriate exposure settings with digital cameras (especially when shooting RAW files) the advantage of a real-time histogram become clear. Many users will find this omission to be problematic.

This Olympus disappoints. The C8080 offers a fresh body design but old thinking. Quality of construction and materials is first rate. As good or better than any camera I’ve yet seen. But the handling ergonomics and feature-set simply fall behind those of the Sony and Canon, and certainly the Minolta. I found the controls to be poorly laid out and difficult to use. I frequently was pressing the wrong buttons at the wrong time, and no amount of use made it easier. There were times when I really had to force myself to use it, because I was trying to compare it with the others that were in my bag at the same time. But I always switched to another camera because of what I perceived to be usability issues.

The Sony and Minolta have fully manual zoom lenses. These are easy to use, quick and responsive. The Canon’s zoom isn’t as good because it is motorized, though the fact that it is controlled by a traditional ring on the lens makes it work reasonably well. The Olympus (like the Nikon) has an electronic zoom level which I found to be unpleasant to use. It’s not precise, and more often that not I had the wrong framing rather than the right framing, no matter how much I played with the lever.

I spent less time with the Nikon than with any of the other cameras, for reasons which are explainedhere. Nevertheless I had enough handling and shooting experience with it to draw some conclusions and comparisons.

The 8700 is the most "traditionally" designed of the five cameras being compared. It is very much from the digicam mold of the past few years, and that’s not a particularly good thing. The zoom lens doesn’t go as wide as any of the others, but it does go longer. It’s also a lot slower. Several stops slower at many focal lengths. Given that none of these cameras have very good high ISO capability this could be a real drawback for some photographers.

Like the Olympus the Nikon has an electronic zoom lever. This makes setting the focal length and the framing awkward and imprecise and has no place on a camera with serious pretensions.

The articulated rear LCD is almost identical to that on the Canon, and is a decent design. But, like all of the cameras in the group, except for the Minolta one is constantly having to manually switch between the EVF and the LVD, and more often than not finding that the wrong one is turned on. Combine this with the lack of a RAW buffer, and not a single "special" feature that makes it stand out from the competition, and I find it hard to find a single compelling reason to recommend the 8700.

And The Winner Is?

There is no one stand-out winner, though the Sony and the Minolta are my preference. Each has its advantages and drawbacks. If shooting in low light with a fast lens and excellent assisted autofocus is important, then the Sony wins. It also is, for me at least, the most enjoyable camera when it comes to handling. But, it will lose points among many potential purchasers because of its purple fringing problems and lack of a RAW buffer.

The Minolta has the most interesting feature set and smoothest user interface. It also is the only one of the five that can effectively shoot RAW files because of its large and intelligent buffer. The automatic switching between the EVF and LCD is also a major advantage over all the others, as is the Anti Shake capability. For these reasons it is my personal favourite.

The Canon Pro1 is the middle child. Not my first or even second choice, but I could live with it. It does most things well, but nothing exceptionally.

The Olympus and the Nikon simply don’t offer what I see as any compelling advantages over their competitors in the way of features or handling. And since all five cameras are very similar in their image quality there isn’t a strong reason to choose one of these over the others which do offer several advantages.

So as you can see, there isn’t one camera that dominates this competition. All will produces very high quality A3-sized prints that if competently produced can be comparable to those from much expensive cameras. But some models clearly have advantages over the others in certain areas. Anyone considering the purchase of one of these five cameras should visit their local dealer and handle the camera(s) that you’re interested in. You wouldn’t purchase a car without a test drive, so don’t buy a camera based on brand loyalty, and certainly not an the basis of opinionated reviews such as these.

Find out whatyouthink before making a purchase.

The programs found onVideo JournalDVDsare based on articles and images that appear here on the main web site. Below areprimarylinks that will lead you to