Here — in order of priority — is the equipment needed for the sharpest, high-resolution photographs possible.

Surprising huh? A tripod ahead of top-quality lenses. Not really. If your camera isn’t absolutely stable when taking your photograph it doesn’t matter how sharp your lenses are, the result will only be as good as the weakest chain in the link — and that’s usually the tripod. 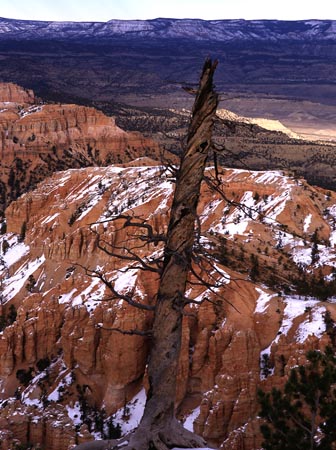 Often when doing landscape work maximum depth of field is needed. Stopping a lens down to f/22 or f/32 means long exposures, and only a solid tripod system makes this possible.

Tripods come in many different flavours; large and small, heavy and light weight, expensive and inexpensive. What to get? As with most things in life — you get what you pay for. But, there are two conflicting priorities, at least for the outdoor photographer. These are sturdiness and light weight. A tripod with the greatest mass is likely to be the one that holds your equipment motionless. If you only shoot out of the trunk of your car and never travel by air, then simply choose a very large and heavy tripod and be done with it.

But, if like most people you do some hiking with your gear to find the best spot for a shot — even if just a few hundred yards from the road, and if you travel at all by air, then a light weight tripod is a must. Combining these two attributes is the trick. The two brands that are most commonly used by pros and serious amateurs areGitzoandManfrotto/Bogen. They have their differences, and some people have almost a religious zeal as to which brand is preferable.

I used Manfrotto tripods for years until Gitzo introduced theircarbon fibermodels. Carbon fiber is the stuff that they make airplane wings and high-tech tennis rackets out of. It is stronger than steel or aluminumƒâ€˜ or their alloys, and much lighter weight. It also is less prone than metal to "ringing" or after-vibrations, and is more comfortable to hold in cold weather. Unfortunately carbon fiber tripods are also more expensive. I use the Gitzo model1349. 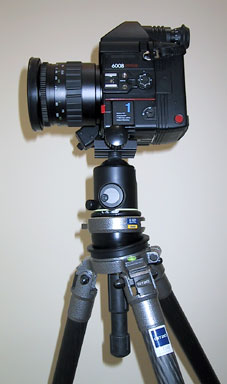 For 35mm and medium format work there really isn’t a choice. Ball heads are the preferred way to work. Positioning is fast and sure and they are easy to use in cold weather when wearing gloves (no fussy small knobs). There are a number of good brands, but the standard bearer is theArca-Swiss B1. It’s expensive, but then top quality gear usually is.

The Arca-Swiss mounting plate system has become a standard. With a plate on the tripod base of each of your camera bodies and long lenses, changing set-ups is quick and hassle free. Screwing and unscrewing tripod threads is a total waste of time. Don’t do it. Get a system with mounting plates. Get the Arca-Swiss system. It’s small, simple and reliable. A number of compatible plates exist including those fromReally Right StufforKirk,and they are generally less expensive.

This is an unusual but excellent accessory. Gitzo makes a device called a1321 Leveling Base. By removing the center column and/or mounting plate on your Gitzo tripod this device features a new mounting plate for the ball head that swivels in a cup, allowing the whole head and ball assembly to rotate though about 15 degrees in every direction. It also features a built-in bubble level. What good does this do?

When standing on anything other than level terrain you need to extend the tripod’s legs to different lengths to make the head level. Getting it roughly correct is fairly easy. Getting itexactlycorrect is very difficult, especially when standing on rocky or very sloped ground. Leaning over to adjust a lower knob on a leg while trying to maintain balance and keep the tripod from falling over isn’t easy.

The 1321 is a big help. As can be seen in the photo above, the ball head mounts on a base that swivels enough to achieve perfect level with the aid of its built-in bubble. This is a must when the ball head is flipped over so that a vertical shot can be taken. In this instance you loose the ability to adjust the ball itself on the vertical axis and if you’re off level there’s nothing that can be done other than to adjust a legƒâ€˜ usually at a awkward angle. The 1321 makes this unnecessary. It is also very useful when shooting with aWimberley Sidekick and an ultra telephoto lens, since effectively the ball head now has a similar restriction onbothaxis.

The downside of the 1321 is that it adds about 1.5lbs of weight. Nevertheless, for everything except the most arduous hikes I’ll use the 1321 because it adds so much more control to the whole tripod system.