Sill photographers moving to shooting video and motion soon discover that while many of their accessories can be used in common, there are some which are specialized and needed for video work. Here are a half dozen which I have found to be good value for the money and the minimum to get the job done right. 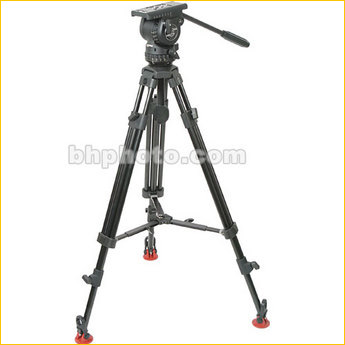 Still photographers moving to shooting video will be pissed to hear this, but you need to buy a new tripod. Not that your’s isn’t big enough or heavy enough, but because it doesn’t have a fluid head. Fluid heads need to be in a ball and cup mechanism that is part of the tripod’s basic structure.

What’s a fluid head? Simply one which has variable tension settings on all axis, which when the camera is panned or tilted moves in an ultra-smooth manner. Trying to pan a normal photographic head is simply going to produce jerky amateur-looking footage.

The Sachtler FSB-6T is usable with just about any still or video camera. It has a built-in self-illuminated bubble level and comes with a decent fitted carrying case, all for less than $1,500. There are much more expensive fluid head tripods available, but the Sachtler does the job at a not-unreasonable price. 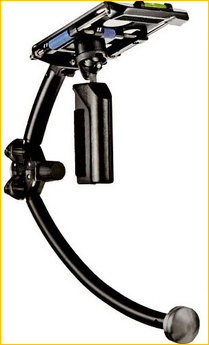 If you have ever watched a movie or TV show (and who hasn’t) then you’ve almost certainly seen the Steadicam in action. Shots where the camera is moving; where it is going down a corridor, up a flight of stairs, in and out of people within a crowd – anywhere where the camera is in motion in close confines, it has likely been shot with a Steadicam.

The Merlin is a version designed for use with cameras weighing up to 5lbs. It costs about $800. Larger and heavier cameras need larger and more robust Steadicams, some of which can cost upwards of $60,000. But, from the Merlin to the larger pro models they all work on the same principal.This videoshows what it’s all about and you can find out morehere.

The Merlin(indeed all Steadicams) are a bit of a bear to set up properly, and can then take some time to learn to control. Using a Steadicam is an art, and in the pro cinematographer world there are cameramen who specialize in it. But there’s no reason why you can’t learn to set up and use the Merlin in just a few hours, and then to be able to produce motion footage that simply can’t be produced any other way. 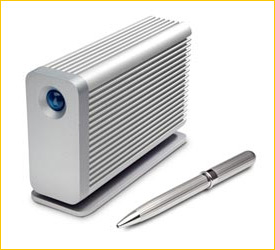 For videographers who travel having enough portable storage is always a problem. Hard drives have now dropped to around $100 / Terrabyte, but that’s in bare drive configuration, not with a case, power supply and multiple interfaces.

The Lacie 1TLBDQ is quite a bit more expensive than this, at about $550, but to my mind is worth the premium. Among its benefits are that it is self powered (when using Firewire 400 or 800), and therefore one doesn’t need an external power block and power cord. It also has four interfaces; USB II, Firewire 400, Firewire 800, and eStata 3GB.

For those working with video, though it’s a 5400 RPM drive, not 7200, it is configured as a Raid 0, so it is quite a bit faster than a straight drive configuration.

There is no need for a fan, and therefore no fan noise. The styling is elegant and the unit small enough to fit comfortably in a briefcase. All in all a somewhat expensive, but excellent solution to having enough storage when on the road.