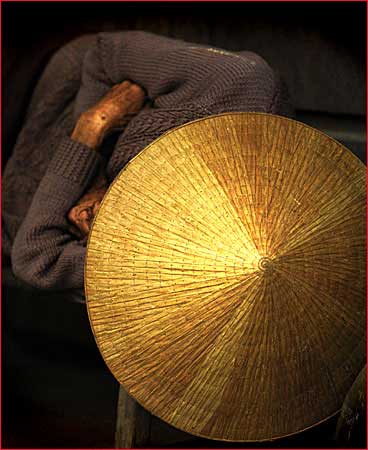 Whilst my main form of photography is more traditional landscape work on large format and on film, I also relish the opportunity to work in foreign countries in a more reportage style. I recently had the good fortune to go to Vietnam for 10 days and saw it as a great opportunity to step back from my usual style; instead of the Australian Outback I would shoot street scenes and people.

I also made the decision to shoot entirely on my D60, even committing myself to taking no film at all and no back up film camera. I expected that the D60 would be an idea tool for such freeform work and in that respect I was not disappointed.

Vietnam, for those who have yet to visit, is a wonderful place to spend a week or so. I spent most of my time aroundDa Nang, in a little fishing village calledHoi An. I like to spend most of my time in one or two places and really get to know them, rather than be continually on the move and never really ‘see’ a place properly.Hoi Anis a maze of tiny streets and every day I found new and unexpected scenes, textures or characters.

In this article I won’t be talking about pixels or file sizes and so on. There are an infinite number of theoreticians on the various internet forums who talk about nothing else, but never seem to actually make images. I am far more interested in shooting images and making prints than dpi, MTFs and lp/mm. 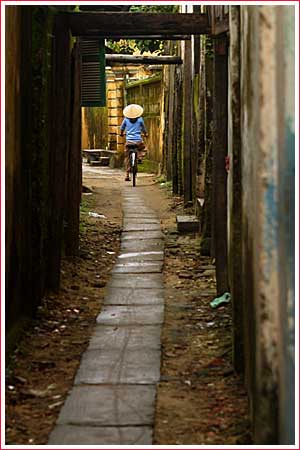 By focussing entirely on a digital workflow there were certain precautions I took in my preparations for travel.

1. Make sure you have the correct chargers; you can be certain that ALL of your digital devices will use different size batteries, each needing its own charger. Also make sure they work with both 100v and 220v as well as having the correct plug adapters. Vietnam mostly uses a US style plug and runs on 220v.

2. Make sure you have enough storage capacity for the shoot. There is precisely zero chance of finding any extra on the trip. Whilst it is normally possible to pick up extra film, I cannot recall seeing any CF cards on sale inHoi An. I used a Nixvue Vista 20GB and filled half of it up in 9 days.

3. Make sure you can get your camera equipment back into your home country. Digital equipment is expensive and to get to Vietnam you usually transit through Singapore or Bangkok. From a Customs point of view, you are arriving back home from a city where cheap electronic gizmos are freely available so, if you can’t prove you bought your stuff in your home country, they may decide to charge you duty. Carry copies of the original receipts as a bare minimum.

Having used Canons since the early 80s I am pretty familiar with their idiosyncrasies so using the D60 was a breeze. The fact that it is digital has very little bearing on what you shoot — the same subjects can be captured in the same way with (mostly) the same lenses. The built-in meter worked fine and the burst rate was adequate for the job even though I shot all RAW.

So far so good but there are some aspects of the D60 (and similar cameras) that made this a particularly enjoyable and satisfying shoot. 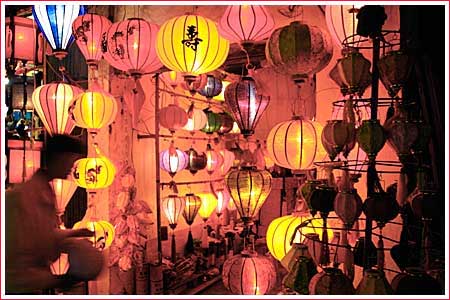 First and most importantly is the freedom from limits on film. No-one ever has infinite film, regardless of budget. You can only carry so much and the mental film counter is always running, for me at least. Using the Nixvue allows about 2500 RAW images to be shot before it fills up.

Together with the fact that you can delete images that you are not happy with (see the second advantage below), this allows you full freedom to shoot stuff you may have thought borderline at first look. If something took my fancy I would shoot it anyway and see how it looked on the screen.

In some cases I got rubbish but more often that not I got an image that was worthy of further scrutiny back home. I deleted very little and some of my ‘chance’ shots are in my final edit. I am sure that this freedom-to-shoot enhances creativity and stops the voice of reason ("don’t waste film") from dominating the more creative subconscious mind.

Life is a blur

Chimping the screen on the camera might make you miss a moment’s action if you do it obsessively, but what it does allow is the opportunity to really work all the angles of a particular scene.

I came across a wall that had a bicycle resting against it. The wall was a mustard yellow and had a fantastic texture that I just had to use. I must have shot 30 or 40 images of this and by looking at the screen I was able to ‘evolve’ my final hero shot by using feedback from the preview to stimulate new ideas.

I know that if I had been using film I would have never shot that many images, not necessarily because of the cost but because I would have assumed my first few frames had captured what I wanted. How many times have you seen film back from the lab and said to yourself "that’s an OK shot but I wish I had just stepped to the left or shot from lower etc…"

Chimping is a very powerful tool — as an aid to creativity it’s well worth the high price of admission to the digital world. 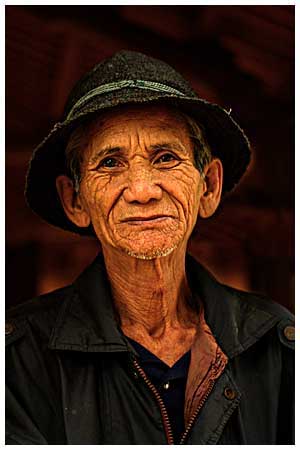 Well, not really but here is an extra dimension to people photography.

I have always wished I could easily give the people I photograph a print of the image I make of them. This is clearly impractical in the field but I did get a huge response to showing my subjects the image on the D60 screen.

People like seeing their own image and on many an occasion I was able to really break the ice very quickly indeed, just by shooting a very quick snap and then turning the camera around to show the image. I even let some people shoot pictures of me and each other to much hilarity all around. I only found this out by accident but soon adopted this approach as pretty much standard.

Regrets, I Have a Few.

But not serious ones.

I find the time taken to download the CF card onto the Nixvue too long. It takes about 6 minutes for this and you can bet your boots you will see a prize-winning photograph pass you right by during this time.

Answer, carry a larger number of cards. I use a 512MB card but would be better off with at least two 256MB ones instead, or 512MB for that matter. Far better to swap cards than rely on downloads even though I get 70 frames per card. Carry enough cards to last the whole day rather than make the mistake I made of relying on the Nixvue for ‘film changing’.

I also wish I had taken my laptop. With hindsight, I would have enjoyed reviewing the day’s shoot each evening as well as having valuable back up storage on the hard drive. The Nixvue did actually lock up at one point and gave me an awful fright until I managed to reset it and all was OK – phew! 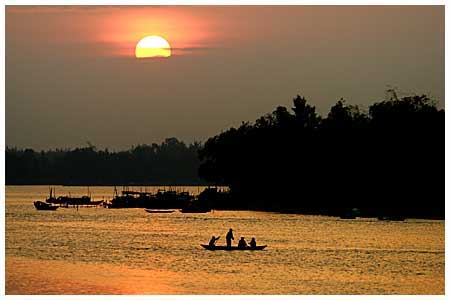 I am not going to go there, but I will say this:

Irrespective of image quality issues ( and I am more than happy with this aspect ) using a dSLR for this sort work has, for me at least, opened up a whole new way of seeing and shooting.

Freedom to shoot heaps of images easily, chimping, and frame-by-frame ISO changes have meant I have ended up with images that I simply could not have made with a limited travel kit.

These are good things, and my photography has become all the better for them.

Someone is bound to ask, so here is my kit, all in a Lowe Pro Street and Field Reporter 200:

Over the last 10 years Nick has traveled the length and breadth of Australia covering over 250,000km in his search for fine "Australian" images for the stock photography market. He makes his home in Brisbane, Queensland and he operates a fine-art photographic gallery in that city.