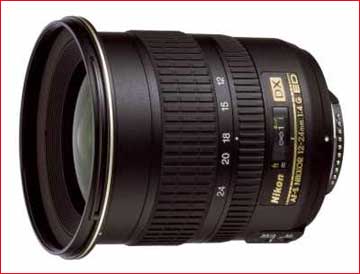 Last week Nikon announced the first of a new series of lenses designed for the reduced image circle requirements of their D series SLRs; the D100, D1, D1X, D1H, and by default the Fuji S1 and S2 as well. This lens is theAF-S DX Zoom-Nikkor 12-24mm f/4G IF-ED(the name is almost bigger than the lens).

This is an interesting development for two reasons. Firstly, it will be welcomed by those that have one of these cameras, as it gives them a lens with the equivalent of 18-35mm coverage on full-frame format. That’s the good news. The possibly bad news is that the press announcement states that this is the first of a new series of reduced coverage DX lenses. In other words, Nikon is committing to produce not just this one lens that gives 1.5X factor digital bodies a true wide angle zoom, but also additional lenses in a variety of focal lengths.

I have to ask — what is the purpose of these? Once the problem of wide coverage is addressed, why produce additional lenses that will duplicate what’s already available in Nikon’s extensive lens line? One can only draw two assumptions. The first is that these lenses will be smaller and lighter (while it remains to be seen if they’re much less expensive). The second assumption is that Nikon sees reduced frame sensors as continuing for some time to come, since producing a new range of lenses for past cameras isn’t the way most manufacturers operate.

I see this approach as problematic for a couple of reasons. Let’s look at someone that owns a Nikon film camera body as well as a D Series digital body. A DX lens won’t work properly on the film body. The image circle that it projects won’t cover full frame. I have to assume that there are a great many photographers in this category and for them DX lenses make no sense.

Now, assume that all you have today is a current D Series Nikon body and you buy some of these DX lenses. Then, at some time in the future you decide to buy a full-frame digital Nikon, (or other lens-mount compatible brand — such as the Kodak DCS 14n). The DX lenses which you own will simply not work on this new body. Sure they’ll mount, but they won’t cover the format. This makes little sense to me since the path that most photographers take is to upgrade their gear as their skills and interests develop. Nikon will disappoint those who don’t think through this issue.

Some folks on the Net’s discussion boards have speculated that the development of Nikon’s DX lenses means that Nikon is not going to be introducing a full frame digital sensor body. Nonsense! There is good information out there (as of mid-December, 2002) that Nikon will be introducing a full frame pro-level body at the PMA show in Las Vegas in early March. Bank on it!

That being the case the wording of the Nikon DX lens press release is revealing. They talk about their D Series cameras and their 1.5X chip factor and how this new lens line is designed for the D Series. One can only assume therefore that the new full-frame digital Nikon willnotbe part of the D series, and that they will be introducing additional D Series (reduced format) cameras in future as well.

This leads to some speculation on my part. Firstly, that the new full-frame Nikon will not have a D designation but rather will be an F series camera. An F6 perhaps? This would be consistent since Canon has retained its "1" Series designation for its pro-level digital body. As well, sales of film-based SLRs is declining at a very rapid pace, which likely makes the Nikon F5 and the Canon 1v the last of the high-end film-based SLRs. A digital F6 is therefore a logical next step.

This therefore means that Nikon intends on diverging its digital camera line into two streams — the D series will retain a 1.5X chip factor and the F series will become full frame.

I regard this divergence as a mistake. My reasoning is that while full frame sensors are currently expensive to fabricate, and require more expensive and sophisticated support electronics in-camera, Moore’s Law will ensure that prices will drop. At some point within the next few years it will cost hardly more to make a full-frame DSLR than one with a smaller chip. It’s therefore my contention that with the exception of consumer digicams the future lies in full-frame SLRs, not ones with 1.5X or similar magnification factors. These are going to soon go the way of Half Frame and APS. I also predict that the recently announced 4/3rds format will die stillborn.

But by then Nikon will have two divergent camera and lens lines; D and F. DX series lenses won’t work properly on either Nikon’s film or full frame digital bodies. The competition though will have full-frame sensor equipped bodies that will sell for comparable prices and which will not suffer from lens interchangeability issues. This could be very detrimental to Nikon’s market positioning in the consumer area.

It therefore seems that with the forthcoming DX lens line Nikon is entrenching a technology that has an inherently limited life span. If my assumptions are correct this may turn out to have been a serious marketing error.