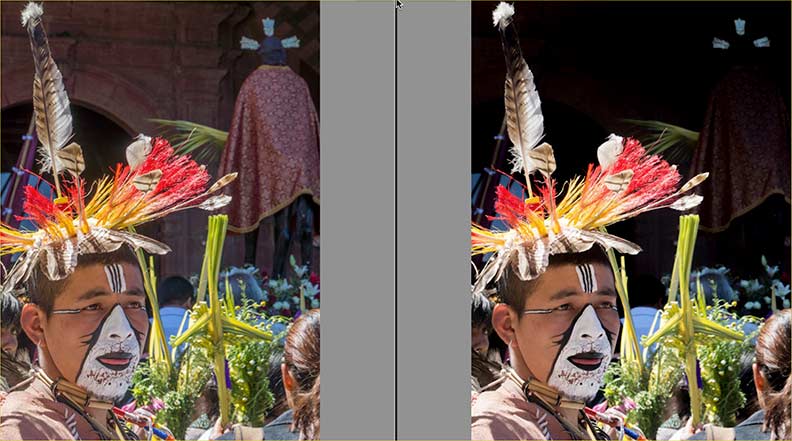 I don’t reallyhateelectronic viewfinders. That’s hyperbole. But I really dislike them a lot of the time. The reason why is that they are at best tiny TV sets, and as such have very low contrast ratios compared to the ability of the naked eye or a good optical or  large DSLR  viewfinder. In bright situations, where there is also deep shade, it can make visibility into the shadows when shooting highly compromised.

I just got back from photographing a Palm Sunday parade here inSan Miguel de Allende, Mexico. A fascinating mix of Catholic and pagan imagery. The above shot, while not portfolio grade, is illustrative of the problem that I’m referring to. I have edited the same frame so that the one on the left looks pretty much the way it does to the naked eye or the viewfinder of a full-frame DSLR. The one on the right more like the view through the Sony’s EVF.

I wanted to capture both the boy in indigenous costume and also the statuary which had just been carried in toward the church entrance. The EVF of my Sony NEX7 – which has one of the best EVFs currently available, was simply unable to show me the boy and the statue at the same time. The statue was invisible in the shadows and thus I was unable to frame the shot accurately without looking away from the EVF. Really frustrating!

Manufacturers have made great strides the past couple of years in improving resolution, brightness and refresh rates on EVFs. The last frontier appears to be contrast ratio, and an improvement can’t come soon enough for me.

In the meantime, what flashed though my mind as I was shooting, was that aFuji X Pro 1would have been just the ticket. Flip the front lever and switch to a good old fashion optical viewfinder.  Humm…. a friend who visited here a couple of weeks ago had one which I played with, and I was very tempted. It might just be what I need when I return to Mexico next Fall.