This page is one of three devoted to photography in Yellowstone National Park in winter.
The other two pages are…
Yellowstone in Winter
and
Yellowstone Winter Wildlife

Land of Steam and Snow

Yellowstone is renown as one of the world’s most accessible locations where the earth’s magma is close to the surface. This causes geysers, hot springs and other unusual thermal phenomena. Steam is copious in winter, and working with it is challenging for the landscape photographer. 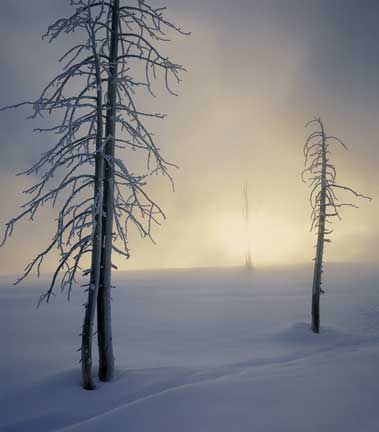 After overnighting at theSnow LodgeatOld Faithfulwe were up before dawn and hiking among the geyser fields. The temperature was -20C (-4F). The sun rose behind a fog bank generated by one of the geysers, and these hoar-frost rimmed trees provided a haunting foreground.

Regrettably the web can convey almost nothing of the detail and subtlety of a large print of this delicate medium format image. In a large print you can actually see individual ice crystal on the tree trunk.

A comparison with another photographer’s view of this scene can be foundhere. 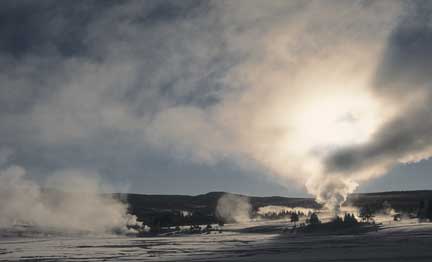 Walking back to the lodge after some 90 minutes in -20C temperatures from a distance we sawOld Faithfulerupting . To me this looked more like the smoke from vast fires than steam. 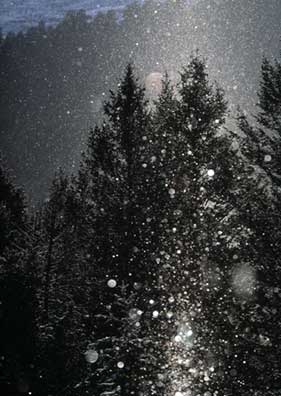 When it’s very cold and dry, and a light crystalline snow is falling, low backlighting from the sun can create an effect some call "pixie dust". The best way to capture it is to have a dark background, use a fast shutter speed and a relatively wide aperture. I bracketed this set-up extensively, both in terms of exposure and because there’s no way of telling what kind of effect the random snow crystals are going to create. This frame was the most fun. 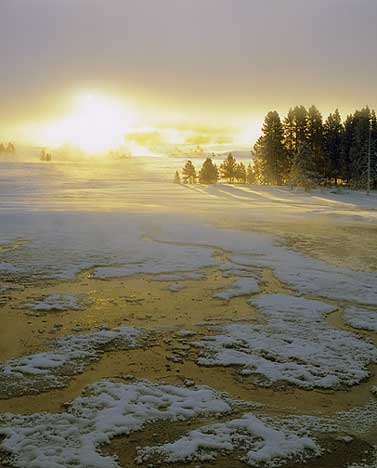 We spent some 20 minutes standing in the extreme cold photographing a geyser back-lit by the rising sun. I was certain that I would come away with a strong frame. On the lightbox a few days later not one turned out to be interesting. Once we moved on though I saw this scene and stopping just for a moment took a single frame, as seen above.

I find that this is often the case. A shot which I think will succeed is a dud while another which is done in an offhand way turns out to be stronger than first imagined. I suppose it’s what makes this game exciting and unpredictable. 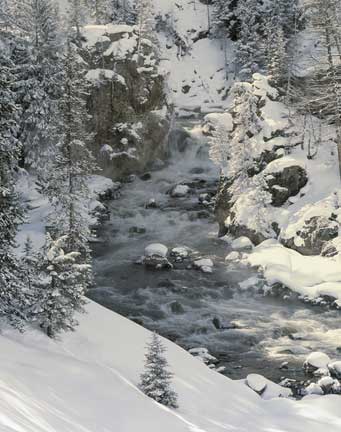 Though the area of Yellowstone park betweenWest YellowstoneandOld Faithfulis fairly flat, there is a 2 mile side road that runs parallel with a deep gorge formed by theFirehole River. In winter most snowmobiles race past the turnoff, but we took it and found some awesome scenery.

I have read commentary by other photographers thatFirehole Fallsis very difficult to photograph because it faces north-south and is quite deep. This means that direct sunlight never reaches it. On this hazy-bright winter’s days there was enough even light and reflection from the snow that the interior of the gorge was filled with a soft glow, and I was able tojustcapture the extreme dynamic range on film. It was matrix metered with +1 stop compensation dialed in. The resulting exposure turned out to be dead on. 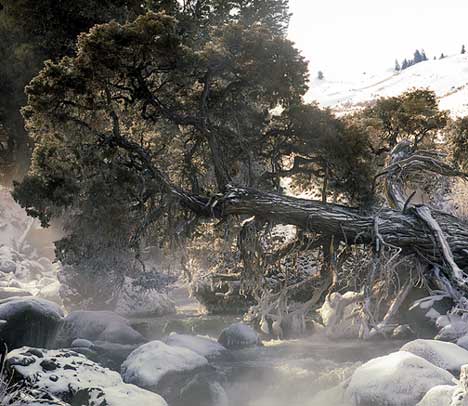 Just a mile or so inside the northern Park entrance the road parallels a river. We had just driven into the park when we saw this fallen tree across the river covered in frost and back-lit by the morning sun. When we left the park at the end of the next day we noted this scene again, but it was completely uninteresting in afternoon light and without the frost.

This page is one of three devoted to photography in Yellowstone National Park in winter.
The other two pages are…
Yellowstone in Winter
and
Yellowstone Winter Wildlife