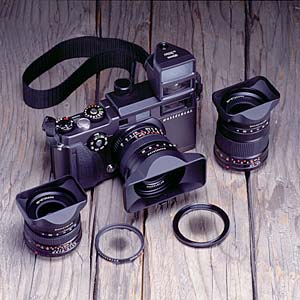 I have been a huge fan of theHasselblad XPancamera system since it first came out in late 1998. I purchased one of the first cameras to come into Canada in early 1999 and have used it with the 45mm and 90mm lenses for a great deal of landscape and travel photography.

Because of the camera’s small size, light weight and very high quality lenses to a large extent it has replaced theFuji 617for much of my panoramic work, and I’ll frequently use it instead of aLeica M6for travel work if I think landscape shooting is going to be possible and fast aperture lenses aren’t needed. I used the camera extensively on a shoot in southernUtahin January, 2000 and you can see a gallery ofXPanimages from that shoothere.

In October, 1999Hasselbladannounced what had been rumoured almost since the camera’s introduction‚ a 30mm ultra-wide angle lens for theXPan. I ordered one right away fromRobert White, an excellent mail-order house in theU.K. Robert had placed an order for the lens with Hasselblad soon after announcement and promised I would be among the first to receive one.

Sure enough‚ after a wait of almost 4 months, in mid-February 2000 my lens arrived. Since its serial number is about #150, I’m fairly certain that it is among the first lenses shipped outside of Japan. (The camera and all of its lenses are made byFujiin Japan, though marketed elsewhere in the world byHasselblad. And, for those that are familiar withFujimedium and large format lenses, there should be no surprise that these are fine lenses indeed‚ fully up toHasselblad’smedium format reputation withZeissglass).

Fortunately whenFedexdelivered the lens I was pleased that it was a brilliantly sunny winter day and immediately set out to do my first tests. With an ultra-wide angle lens flare is frequently an important issue and I was eager to see how the 30mm performed in this regard. The above photograph is of a life-guard station on theTorontoharbour-front, and as you can see from the shadows was shot almost directly into the low mid-February sun. There isn’t a hint of flare! Whether through efficient multi-coating or a well designed lens shade, this is impressive performance since there are the two extra surfaces of the centre filter to cause flare as well. (You may clickhereor on the picture above for a 10" wide version of the photograph above).

Photographed with a Hasselblad XPan and 30mm f/5.6 lens on Fuji Velvia 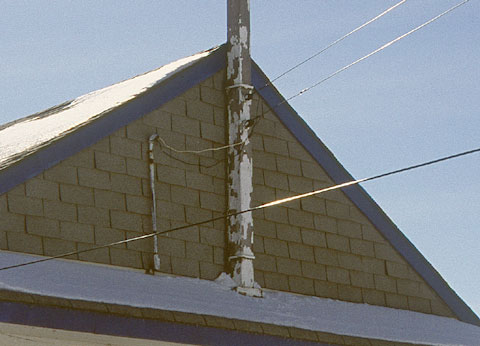 This is anactual pixelsblow-up from the above frame. The transparency was scanned with anImacon FlexTight Photoscanner at 3,200 DPI. This is at the grain level of the film. A larger blow-up wouldn’t show any further detail. I realize that you’re viewing this on the web at a maximum of 92dpi doesn’t give too much information, but I can assure you that image quality and resolution are superb.

The HasselbladXPan 30mm f/5.7 Aspherical lenscomes in a foam-fitted leatherette box. The lens is supplied complete with accessory viewfinder, 58mm centre filter, custom lens hood and fitted pouches for both the lens and viewfinder. It is worth noting as well that the lens hood locks in place‚ another improvement over the first-generation lenses. The lens pouch is also considerately designed to hold the lens with the custom lens hood attached. In light of the price of this lens ( U.S. $2,500‚ $3,000 depending on where in the world you live) it comes well presented and equipped.

Of course the big news about this lens is its focal length. In standard 35mm mode this is a moderately wide angle lens. Nothing special. But in panoramic mode the lens covers 94 degrees of horizontal coverage‚ comparable to a 17mm lens in 35mm terms.

Since theXPanis essential a medium format camera in its coverage it really needs to be compared to 6X7cm cameras such as theMamiya 67in terms of coverage.At 30mm focal length this lens is the widest angle lens available foranycamera shooting film of this width. The widest lens for theMamiya 67, for example, is 43mm. For theMamiya RB/RZit’s 50mm. For one last example, theHasselblad Superwideis 38mm, and that’s on a narrower film. My point is that this lens isw i d e, and that’s what makes it unique.

Users of ultra-wide lenses for 35mm SLRs will be surprised at how small the lens is‚ about the same size as the 45mm‚ just a bit fatter. This small size is due to the slow aperture (f/5.6) and the fact that it’s designed for a rangefinder camera rather than an SLR which needs a large back-focus distance due to the mirror-box housing.

I’m no optical expert, but I have talked with one and am assured that this lens is a technical tour-de-force.

This is an f/5.6 lens. Slow by modern standards. But, when used in panoramic mode (which I’m sure is the way most people will use it 99% of the time) the supplied centre filter is absolutely necessary. It compensates for roughly a 1.5 stop difference in illumination between the centre and edges of the frame. That’s just the nature of the beast and is found on almost every manufacturer’s ultra-wide angle lenses for wide-format cameras‚ particularly in medium and large format applications.

The problem is that this reduces the lens to almost f/11. For my primary application, landscape photography, this doesn’t overly concern me since I shoot tripod-mounted almost all the time. But, when used as a travel camera a lens this slow precludes the use of slow-speed film for hand-held work, except on a sunny day at the beach.

Because of this, on myAsian trip, which included shooting in the cloudy mountains and jungles ofBali,I brought along quite a bit of ISO 400 speed colour negative film (Kodak Portra 400VC), which allowed for hand-holding in many situations, often with a monopod.

At the bottom of a long steep jungle trail leading down to the sacredAyung Riverin centralBali,I came across a small alter with a religious ceremony underway. Not wanting to disturb the worshipers I continued down the trail a few yards and came across this apparently ancient idol’s head carved into a large rock beside the footpath. A small tabletop tripod allowed for an exposure of 8 seconds @ f/11.

Photographed with a Hasselblad XPan and 30mm f/5.6 lens on Kodak VC400 film.

I am particularly impressed with the viewfinder. The body itself only auto-frames the 45mm and 90mm lenses. Therefore, the 30mm lens needs to be framed through the accessory finder. It securely attaches to the camera’s accessory shoe and due to its custom design can’t be accidentally dislodged. (This is a good thing since the loss would be frustrating and a replacement would likely bereallyexpensive).

The viewfinder is extremely bright and free from distortion. It has provision for eyepiece diopters and features a hard-rubber eyepiece. The full frame can be seen with eyeglasses. The etched frame-lines show 35mm as well as panoramic framing and parallax correction lines for both formats are also shown.

I was very pleased to see that a bubble-level is clearly visible at the bottom of the viewfinder. This is a critical feature with such a lens system since perspective distortion and bent horizontal lines are problems unless the camera is kept strictly horizontal.

My first day in Hong Kong was cool and rainy. After an afternoon nap to help recover from jet lag I was eager to try out the new 30mm lens. As night fell I walked along the promenade on theKowloonside ofVictoria Harbour, and using a small table-top tripod on the edge of the sea-wall took this 8 second exposure @ f/16. The rain and mist helped add some character to the sky.

Photographed with a Hasselblad XPan and 30mm f/5.6 lens on Kodak VC400 film.

TheXPanwith the30mm lensisn’t the fastest operating camera system one can own. It really demands being tripod mounted for a variety of reasons. Taking a shot requires frequent changes of eye position between the camera’s viewfinder for focusing and exposure, the accessory viewfinder for framing, and the rear LCD panel for shutter speed and other information. It takes a bit of getting used to but isn’t a big deal.

In the winter of 2000 my wife and I took a vacation inBali, Indonesia, with stop offs inHong KongandSingapore. Though not a photographic trip per se, I took along my Hasselblad XPan system and new 30mm ultra-wide angle lens.This portfoliofeatures photographs from that trip.

In the spring of 2000 I lead a landscape workshop in Monument Valley Arizona. The 30mm lens saw a lot of use since the western landscape lends itself to wide-format treatment.

Redwall Canyonis a huge amphitheater carved out of the canyon wall by massive floods of the Colorado River inside the Grand Canyon over countless millennium. Many hundreds of people could fit in this cave at one time.

Using the 30mm lens I was able to exploit its wide field of view in this unique location. It’s worth viewing the enlarged 10" version so you can see people’s silhouettes in the lower left hand corner to add a sense of scale. To see more photographs from this trip, clickhere.

I’ve been greatly enjoying working with this lens. TheXPanhas become one of my most used systems for landscape work and this lens greatly expands its versatility. This camera system is not at all mainstream. It’s expensive and quirky and the30mmlens alone costs more than the camera. Few photographers are comfortable working with ultra-wide-angle lenses let alone wide-aspect-ratio systems. Not that it matters, but my guess is that this lens will become something of a collectors item in the years ahead. In the meantime I’m looking forward to doing some exciting photography with it.

ClickhereforHasselblad’spress release and technical specs on this lens.

If you have any questions about this lens please feel free to contact mehere.