Back in late 2000 when the Canon D30 was new and hot and the Nikon D1 was king of the hill both Contax and Pentax announced cameras that would offer 6MP full frame imaging chips. The chip used was from Phillips, and was essentially the same chip used in a number of high-end digital backs used on medium format cameras.

Photographers were thrilled. Imagine — a full frame imager in a 35mm camera.

Then time passed, and passed, and still no cameras. About a year later Pentax announced that it was dropping out. The rumours were that they simply couldn’t get the image quality they needed from the Phillips chip. Contax hung on though, and in the spring of 2002 they finally started shipping the1N Digital. 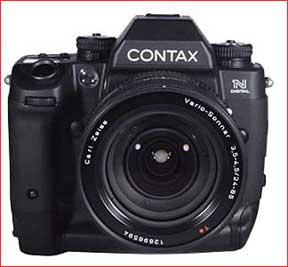 The N Digital is based on Contax’s 1N 35mm film body, introduced the year before. It was Contax’s first autofocus SLR. (Actually they had an autofocus SLR in the mid-90’s that moved the film plane, but that’s another story). Contax aficionados were pleased when this camera came out because finally there were Zeiss autofocus lenses. This camera also appealed because with an adaptor, lenses from the then also newContax 645could also be used.

Seemed like a good system, though the limited range of lenses available was of concern to some pros, especially the lack of fast zooms.

I never reviewed the film-based 1N, though I have been a long-time fan of Contax gear. In the early 90’s I had anRTSIIIand enjoyed its use, especially the handling and the image quality that Zeiss glass provided. So, with my ever increasing enthusiasm for DSLRs I was very keen on testing the1N Digital.

As soon as the N Digital started shipping I contacted Contax and their PR department, explained that I wanted to review the camera for both one of the magazines that I write for as well as this web site. I was told that they would get me a camera for review as quickly as possible. That was more than six months ago. When a camera failed to show up I would call every few weeks and was assured that as soon as one became available I would receive it. But over a half year and after a dozen phone calls and e-mails one never showed up.

But I did get constant e-mails from Contax with their latest press releases, and also offers to have me review various other of their products — just not the N Digital. After a time I simply lost interest and gave up. But, I didn’t forget about it. Two things struck me as being strange. First that I knew that there were cameras sitting on dealers shelves, and secondly that I wasn’t seeing reviews anywhere else, either online or in magazines. Strange.

Two things happened in early November 2002 that lead me to question what was going on. The first was a chat with some senior executives from Contax at thePhotoPlus Exposhow in New York, and the second was the appearance in the French magazineChasseur d’Imagesof a full review of the N Digital.

At the show I was aggressive with the Contax brass, asking them why I hadn’t been provided with a review sample. In fact, I asked, why had I not seen any reviews in an American magazine, though the camera had been in the retail sales channel for a half a year? The answers were the worst bit of evasive baffelgab that I’ve ever heard. They were non-answers. I walked away from the Contax booth shaking my head in disbelief.

Then a couple of weeks later I bought the current issue ofChassier d’Image,in part because it featured a review of the 1N Digital. After I read the review I started to understand what was going on.

If you are not familiar withChasseur d’Images you should know that it is France’s largest photography magazine, and in my opinion one of the finest magazines about photography published anywhere in the world. Their test reports are renown for the technical thoroughness, and unlike their American counterparts they don’t pull punches on poor products, even when it is that of an advertiser.

I speak reasonable French but my reading comprehension is low, so I asked a friend who is fluent to help me with the article. What we read helps explain why Contax has apparently been reluctant to make cameras available to the press for review.

On a scale of 1 to 5Chasseur d’Imagesgives the 1N Digital a 1, the lowest possible rating. The magazine likes the handling and build quality (always Contax strong points) but strongly criticizes the digital side. They write that the image is very noisy, especially at 200 and 400 ISO. Images are clean at ISO 25, 50 and 100, but as they point out that only really leaves ISO 100 as a usable speed.

They are also critical of the buffer, claiming that it is both too small and too slow, and the batteries — four AA cells, which they say are woefully inadequate. They feel that the resolution is good, but really no better than many much less expensive cameras. Also one can’t set the colour space, the post-processing software is lacking, and so on and so on. They have almost nothing good to say about the digital side of the camera. In fairness, they do like the ergonomics, the viewfinder and the metering. And of course, the Zeiss lenses.

Having read that review, and noting the lack ofanyreviews in a U.S. magazine (there was one in a British magazine a few months ago), I am left to conclude that Contax U.S. simply doesn’t want to have media coverage for this product. Most manufacturers are eager to provide cameras to reviewers, usually providing pre-production samples in recognition of the long lead times that traditional print publishers have.

Of course if no press coverage is what Contax wants, that’s their affair. But, they shouldn’t expect for it to go unnoticed. They also should be taken to task for obviously selling a product to consumers that they appear to be less than enthusiastic about. For whatever their reasons Pentax decided that they couldn’t build a camera with this chip, while Contax decided to forge ahead. To save face? Possibly. We’ll likely never know for sure.

By now, of course, the N Digital has missed the boat. Both Kodak and Canon have announced full frame cameras, and with double the resolution of the Contax. The Kodak 14N comes in at nearly half the price, and the Canon, while a bit more expensive, is clearly a far superior camera.

The bottom line for the Contax N Digital. Too little, too late, too expensive, badly marketed.

The following report is based on a 4 day hands-on test of a production Canon EOS-1D done in early December, 2001. The camera was kindly

Sony A55 With Zeiss 24mm f/2It isn't often that something really fresh comes along in this industry. There are new models every few months, but