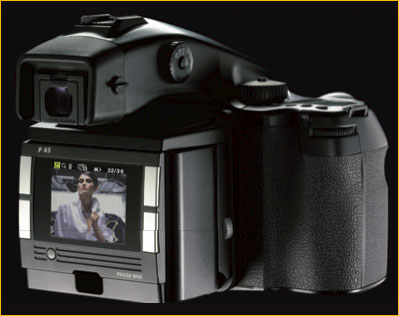 I’ve used 4×5 cameras for the past 30 years.  Now I must confess I’ve had some “flings” with medium-format, the latest being the Fuji 680 five years ago.  It has been useful in my work with moving water, since its lens tilts allow me to use faster shutter speeds.  With moving water, getting a meaningful composition involves a high degree of luck!  I usually cross my fingers — and then take many exposures at various shutter speeds.  This would be prohibitive with a 4×5, since each exposure runs around $3 or more (film and processing).

For all my other work, I find that when I want to capture a “real” image, I must use a “real” camera — which in my mind, is a 4×5. I mainly photograph scenes with trees and other vegetation, which include a myriad of fine details — needles, twigs and such.  Large format film can render these scenes with amazing detail, even in a 30×40 inch print.

On the basis of three different test exposures, I’m now announcing my latest “fling” — in advance!  In late December, I was part of a shoot-out.  In one corner, Jim Taskett of Bear Images (www.bearimages.com) with the latest PhaseOne P45 39 megapixel back on a Hasselblad.  In another corner, Bill Atkinson, proud owner of a Hasselbad H-1 with a PhaseOne P25 22 megapixel back.  And me, with my Linhof, armed only with Velvia 4×5.  I choose subjects that I knew digital had a hard time resolving—the aforementioned needles and twigs and such.  Since we had three different camera systems, it was a little hard to exactly frame each test identically. But, in 30 minutes, the smoke cleared, and it was all over — except for me.  I had to still get my film processed — and then scan it!

The next day I used Bill’s Heidelberg Tango to make the scans, resulting in three 500MB files at 16 bits.  Bill Atkinson and I then did some comparisons.  Since Bill was considering upgrading to the newest PhaseOne P45 back, he wanted to know how it compared with the P25. Bill “developed” the raw files with Capture One software. The P45 raw files are around 50MB, and about 224MB after development.  Looking at both P25 and P45 files at 100% on a big Apple Cinema display, the P45 files had less jaggies, less color fringing, less shadow noise, and better definition in saturated tones (like green leaves). So, without even considering the dramatic increase in megapixels, the P45s were noticeably better.  Bill was  sold. 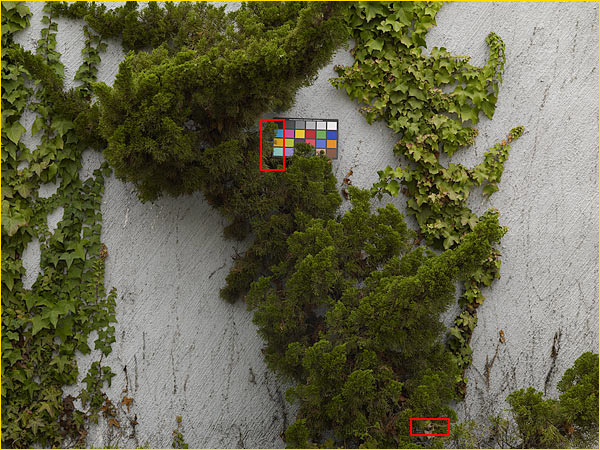 Full Frame of Test Images Below 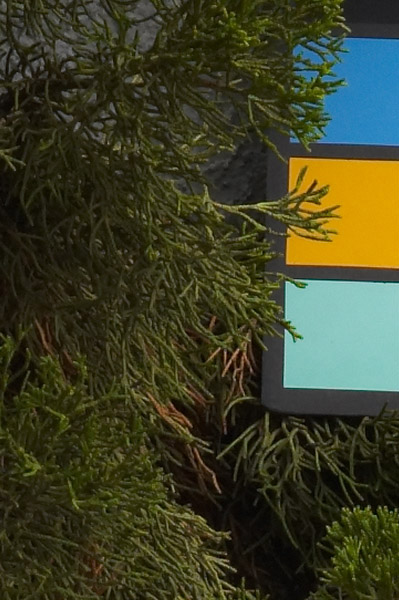 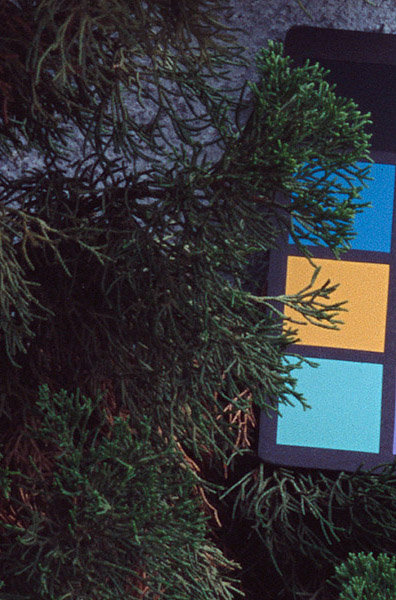 But how does the P45 do against 4×5 film?  This was THE big question for me.  For years, I have heard ruminations that 40-50 megapixels should be able to match 4×5 film resolution. I was about to see the first actual test of this… The digital files were…(drum roll)…not as sharp—but very close!  I knew that if they looked close on an LCD at 100%, they’d look even closer as prints.  Since 30×40 is usually the largest size print I make, I resized each file to a width of 40 inches in Photoshop, and did appropriate sharpening with USM and / or Smart Sharpen.  From this large print file I then cropped out various critical areas to make 11×14 prints (which are easier to compare directly), printed on an Epson 9800.  Even at this large size, the P45 prints showed little of the typical digital artifacts that scream “digital!”

For the next few days, I kept looking at these digitally-captured 30×40-sized prints, and comparing them to the prints from 4×5 film.  The film still had aslightedge, but I eventually decided that I would be proud to show one of these P45 prints, even in 30×40 size!  On Dec. 31 st , I took a very deep breath, and wrote a check for a P45 back (the back can also be useful as atax deduction¦) The back should arrive by February. Since this sensor is very slightly smaller than 6×4.5 format, I’m going to be using the P45 on a medium format Mamiya 645AFD.

These past few years, I have been on many trips with photographers who shoot digitally, and have been, well…envious! I remember working on some moving water in Yosemite with a friend using a Canon 1DS.  I started my usual routine of making many exposures at different shutter speeds (and crossing my fingers).  My friend yelled out, “thirtieth of a second”, which he determined from his LCD display was the most effective shutter speed for this water.  And he was right!  I recently did a trip with Bill Atkinson where in one week I made 87 4×5 exposures.  Bill made around 3000 digital captures!  I, of course, was more discriminating — but I had to be.  Bill had the freedom to experiment, and get real-time feedback. His exposures costnothing. Although I think I’m quick with my 4×5, Bill wasmuchquicker…which can be important in landscape photography.

I wonder if, in the soul of every large-format photographer, there is a latent snapshooter waiting to get out?  I’m going to find out!  I’m looking forward to having the agility of a medium format SLR (with a zoom lens!), and achieving near 4×5 quality. Digital has more dynamic range than film, and the autofocus on the medium formats can be a plus on certain images.  Bill did an experiment during our shoot-out where he asked us to manually focus several of the images as best we could.  He then took one with the autofocus — and in every case, the autofocused image was sharper than our mortal efforts. With the decrease in capture size from 4×5 (effectively 120x95mm) to the sensor size of 47x39mm, I will start off with around 2.5 times more depth of field for a given composition. I also figure that, if I’m not happy with the resolution, I can simply stitch two or three captures together for an effective megapixel count of around 50 to 90! I will now be able to fill up compact flash card after flash card with moving water exposures — and delete all except the single best one!  I might miss my lens tilts, but the “Flexadapter” will allow me to use the P45 on my 4×5 Linhof. Who knows, I might even want, on occasion, to insert a film holder..? So I’ll keep the focusing cloth handy…

Here are some comparisons of 4×5 film and the P45 PhaseOne back. P45 images are on the left and film scans on the right. Although the degree of enlargement and taking angle of each is slightly different, all files were resized to 40” wide at 360 dpi.  These are sections from those large print files, with appropriate USM applied on the film scans, and smart sharpen on the digital files.  (I also introduced a little mid-tone contrast in the digital files to match the film scans better). Remember, these are very small sections from 30×40 inch prints — and the differences you see will be minimized viewing these as actual 30×40 prints.

A few clarifications: This was solely a test for resolution, not color. PhaseOne did not have any P45 profiles available when Bill developed these RAW files in CaptureOne software, so the colors are a little wild. Theoretically, digital cameras have the capability to provide more accurate color than film. After all, a scanner profile is made so that the colors on the film are reproduced accurately-and film introduces its own color distortions. I’ve seen excellent color from various digital cameras, including the PhaseOne P25. Excellent color is also available through use of Adobe Camera Raw, as it has beautifully smooth profiles for each camera it supports. Although custom camera profiles are notoriously difficult to get right, that would provide the most accuracy.

PhaseOne backs are available in a “universal” mount , and also specifically for various camera bodies. The backs we had available could not be used on the same medium-format or 4×5 body. It would have been best to eliminate some variables by using only one camera, but it was not possible.

And finally-the cost. The price is stratospheric, but running some numbers brings it closer to earth. I’m using a three-year period, since this back has a three-year warranty (providing for overnight replacement in case of problems). Over the last three years my expenses for film and processing came to around 60% of a P45 (large format film is expensive!) Although I do my own drum-scans, I contribute to a Tango scanner’s maintenance contract to the tune of $2,000 per year. Add those up, and I’m 80% of the way to a P45. (Note to Canon: Please wait three years before introducing something just as good at 1/4 the price…)

Charles Cramer has been a large format photographer for more than 30 years. Cramer is recognized as a master printer.

Photographs by Charles Cramer are available through fine photographic galleries throughout the West. He has also taught various photography classes for the Ansel Adams Gallery Workshops. In 1987 he was selected by the National Park Service to be an Artist-in-Residence in Yosemite. Charles Cramer’s landscape work has been published byNational Geographic,Sierra Club, and theYosemite Association. He is also featured in the book,Landscape: the World’s Top Photographers, published by Rotovision.

Charles teaches workshops or theAnsel Adams Gallery, as well as theLepp Institute, and together with Bill Atkinson atCalypso Imaging.

You can read more about Charlie’s experience with the P45 and his comparison with drum scanned 4X5″ film on his latest essay on outbackphoto.com.

See all articles by Charles Cramer

After spending seven years of college studying classical piano, Charles Cramer visited Yosemite National Park, and soon realized he wanted out of those tiny practice rooms! Realizing the similarities between interpreting music and interpreting a negative, he soon became enamored with making prints. Thirty years later, he is now recognized as a master printmaker. His prints sell in many galleries, including the Ansel Adams Gallery. In 1987 and again in 2009, Cramer was selected by the National park Service to be an artist-in-residence in Yosemite. He has taught workshops since 1988 for the Ansel Adams Gallery in Yosemite, the Palm Beach workshops in Florida, Anderson Ranch workshops in Colorado, and the John Sexton Workshops in California. Cramer has been profiled in PhotoTechniques, Outdoor Photographer, Outdoor Photography (UK), Camera Natura (Sweden), Popular Photography (China), PhotoVision, and View Camera magazines. His work has been published by National Geographic Books, Sierra Club, and the Yosemite Association. He is also included in the books “Landscape: The World’s Top Photographers,” published in 2005, and “First Light: Five Photographers Explore Yosemite’s Wilderness,” published in 2009. He also had a solo exhibition at the Center for Photographic Art in Carmel in 2010. His work can be seen at www.charlescramer.com.

On the first of two workshops which I conducted in Iceland in July of 2004 we stopped one morning atThe Black Churchon the Snafelsness Peninsula.