Do You Really Own your Raw Files?

Who owns your digital camera’s raw files? Do you, or does your camera maker?

Not such a silly question if you think about it. Almost every raw file format from every camera maker is proprietary, and some are even intentionally encrypted. Many have been reverse engineered, but some haven’t, and in many cases there are still hidden features which no one outside of the manufacturer understands. Without software that can read your raw image files, do youreallyown them in a meaningful way? How comfortable are you with this?

What happens next year, or the year after, or the year after that if your camera maker stops producing raw converter software that knows how to handle your camera’s files? Well, you always have your original program, right? Do you? Can you find the disk, even today, let alone 10 years from now? Is it in a format that your latest quantum cube data reader can handle? Is your camera maker even still in business? Not as far fetched as you might think. Indeed there are raw file formats today (September, 2004) which their camera makers no longer provide software for. 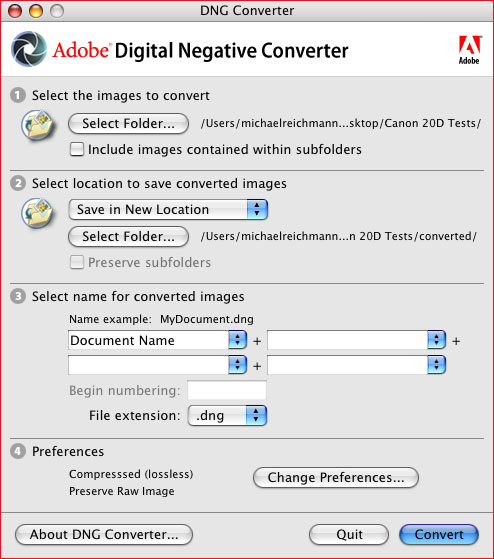 There is now a solution to this problem in the form of a new open standard fromAdobe.It is calledDigital Negativeand has just been introduced at the Photokina trade show in Germany. In addition to an open standard raw file format, which Adobe is making available freely to both camera makers as well as other software publishers, Adobe has now made available a free universal raw file conversion program. It is available for both Windows PCs and Macs, and can be downloaded without charge from the Adobe web site.

What does it do? Simple — point it to a directory containing raw files for any of the 60 raw files formats currently supported (with new ones being added several times a year as they appear), and the program automatically converts them to the new .DNG file format at the rate of just a couple of seconds per file. Since DNG is an "open" file format what this means is that either Adobe’s Camera Raw converter built into Photoshop, or any third party program that adopts this format, will be able to interpret and convert these files today, and in the future. And since Adobe is making this a freely available standard to software publishers and camera makers that wishes to adopt it, it is a virtual certainty that it will be around for a very long time to come, even if Adobe itself were no longer in existence to support it. 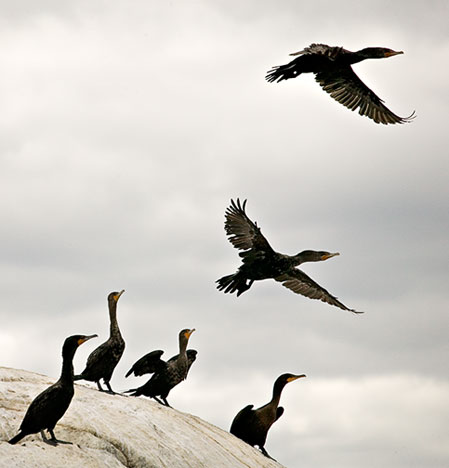 One of the great benefits ofDigital Negativeto the entire photographic community will be the freedom that it will give third party software developers to support all manufacturer’s raw files. It’s one thing for a company like Adobe, with its programming talent, money and marketing clout, to write support for 60+ (and counting) raw formats. It’s quite a thing for smaller developers to do so. But now they don’t have to. Simply have the user input a DNG file (which is quick and free for the user to generate). This means that small developers can return to doing what they do best, rather than being forced to figure out dozens of obscure and ever-changing raw formats from multiple camera makers.

A Call to Camera Makers

ATower of Babelhas been created. To be sure, everyone’s intentions have been honourable. But the cumulative effect of numerous manufacturers producing dozens of new cameras a year, each one of which has a slightly different raw format, has lead us to the point where there are now a huge number of different raw formats. This places a burden on photographers, as well as a concern about the accessibility of these images in the future. It is easy to imagine a day when a photographer turns to his or her raw files taken ten or twenty years previous, and finds that they are unreadable. This has nothing to do with physical media, but simply whether or not the files can be read by then available software that can interpret them.

I therefore urge camera makers to adopt the Digital Negative format. This is an open standard, but it will only truly benefit the photographic community of it is widely adopted. There is nothing to prevent a manufacturer from retaining its own proprietary file format if it wishes to. But it is simple and cost free for companies to add the ability for its software to export DNG format as well. Customers will applaud them for this, and they will be doing a service to the entire photographic community.

There’s little point in writing a detailed review of this software. It is a free download and runs on both Macs and PCs. You’ll quickly see for yourself how it works. The screen at the top of the page tells the whole story. Point to a directory containing raw files (including nested subdirectories if you wish) and select a directory for the converted DNG files to be written to. Files are converted at the rate of one every few seconds. It might take overnight to convert a multi-gigabyte directory of files, but it only needs to be done once. Full details on some of the program’s options are described in the Adobe PDF file that accompanies the download. It is Adobe’s contribution to the digital photographic community and they are to be applauded for it.

Here’s what I do. For now I am following Adobe’s advice not to delete my original raw files that are in the camera maker’s format. When I finish a project I simply point to the subdirectory containing the raw files and have the converter write them to a matching directory on another outboard Firewire drive that I have dedicated to this task. There are two advantages to this method. Firstly, I now have my raw files in two places, and in two formats, a good backup strategy. Secondly, if I need to access the DNG files for use with some third-party program, I know exactly where they are, and don’t have to hunt for them. The backup and conversion process is effortless and can run in the background while I do something else.

Kudos to Adobe for their foresight and generosity. Is there a commercial angle to this? Of course there is. Adobe wants you to also purchase and use Photoshop and Camera Raw. But even if you never spend a cent on an Adobe product, you will benefit from their making DNG an open standard. I only hope that camera makers have the wisdom and foresight to see things that way as well. If they do, we’ll all benefit.